What fiscal response have some countries taken?

After the storm, comes the…?

As we draw nearer towards the slow lifting of the coronavirus lockdown measures that were put in place to "flatten the curve" in terms of limiting adverse health impacts, the plan for reopening the Irish economy after several weeks of dormancy will begin to take form. This reopening will need to be accompanied by substantial fiscal support from the Government that will aim to put the economy back on a robust path to recovery.

According to data collected for the Covid-19 Economic Stimulus Index, which is compiled by economists associated with the Centre for Economic Policy Research, the Irish fiscal response has amounted to just under 7% of GDP. In most circumstances, this would represent an enormous amount of fiscal stimulus. However, the coronavirus crisis is unlike any other downturn we have seen in terms of the scale and speed with which the Irish economy has been hit. Compared to the US, Germany, and other comparable countries, Ireland’s fiscal response is notably smaller, as seen in the chart below. Necessary as the Government’s fiscal support measures to date have been, they may not prove sufficient to restore some semblance of normality to the Irish economy. As such, it may be instructive to look at the nature of the fiscal response in a couple of other countries. 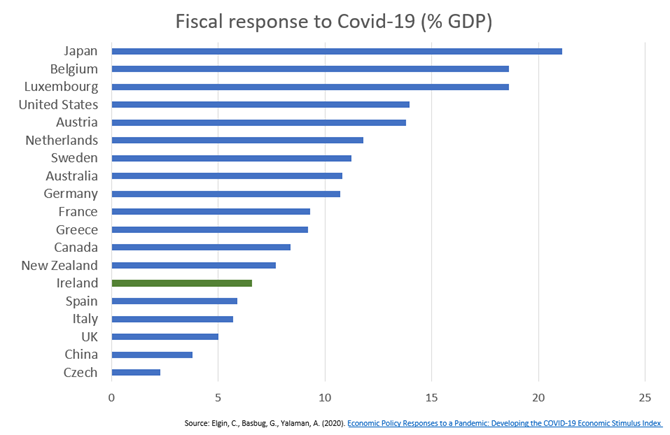 The US is firing on all cylinders

While its health policy response has attracted much warranted criticism, the US monetary and fiscal policy response has been impressive and wide-ranging. The US Federal Reserve was one of the first central banks to act and made an emergency half-point rate cut outside their normal meeting schedule on March 3rd. A second cut bringing policy rates effectively to zero followed less than two weeks later. Since then, the Fed has embarked on a wide range of unconventional monetary policy actions to ensure access to lending is not compromised for US firms and households. These include establishing a facility to provide term financing backed by the recent government-launched Payment Protection Program (PPP) loans, which in certain circumstances become full or partial grants to small businesses.

The US fiscal policy response has also been broad-based. There has been a somewhat surprising willingness from US policymakers to be proactive. The well-known political divide in the US has meant that in response to the coronavirus crisis, Democrats have focussed on measures to help individuals and families, while Republicans have focussed on ways to help businesses. The result is four stimulus compromise packages (to date) which largely support many areas of the economy and currently amounts to over 10% of US GDP, with further substantial support measures being mooted primarily by the Democrats.

In terms of measures to help individuals, the most important measure has been the expansion of unemployment insurance in both eligibility and amount. Emergency paid sick leave for employees in small and medium-sized firms was also established, and there are further relief measures in the form of refundable tax credits, emergency relief for things like student loan debt, and even direct payments to all American citizens and US residents. In terms of measures that support businesses, the legislation has created favourable loan programs such as the aforementioned PPP loan program and the Main Street Lending Program to assist businesses, states and municipalities. There is also spending allotted for direct relief to medical and hospital industries and a mixture of tax credits and tax payment deferrals for employers.

"Whatever it takes" is also being done in Germany

Within Europe, the European Central Bank has acted rapidly and forcefully, but the impact of these measures still lags the Federal Reserve policy in the US. In contrast to the dramatic interventions at the federal level, it is not entirely surprising if somewhat disappointing that fiscal measures at the European Union level still appear limited. However, individual countries are acting forcefully to support their citizens.

The fiscal response to coronavirus has been early and aggressive in Germany. Like the US, the fiscal response has amounted to over 10% of GDP. Given that substantial automatic stabilisers already existed in Germany, large expansions to unemployment insurance were not necessary as they were in the US. Nevertheless, the German government has expanded access to welfare payments like child allowance and income supports and has removed means-testing rules.

Most notably, the German government has been most generous and creative in terms of its efforts to support businesses. Aside from money spent to support hospitals and insurance companies, they have also committed money to recapitalise and buy stakes in coronavirus-affected companies and have expanded Kurzarbeitergeld, Germany’s reduced hours compensation benefit scheme. There are supports for the self-employed and small businesses as well, as the German government is providing direct grants to micro-enterprises and one-person businesses.

Ireland’s fiscal response has been relatively robust, but the necessary current focus on respite must soon turn to support for recovery. The scale and range of measures being taken in the US and Germany gives some sense of the scope of actions that may be necessary to ensure that beating the virus doesn’t break the Irish economy. What form these measures might take will be considered in a forthcoming piece.