Early but -time bounded use of future ‘fiscal space’ likely to offer best means to limit damage to employment,incomes and public finances

The release today of data suggesting the underlying unemployment rate in Ireland for April could be as high as 28.2% compared to a figure of 4.8% in February underscores the scale and speed of the  deterioration in Irish economic conditions in the past couple of months. These data suggest numbers at work in Ireland at present are at their lowest level in twenty years.

How long-lasting this weakness will be and what degree of ‘scarring’ in terms of permanent losses to incomes and employment might follow will depend heavily on economic policy responses as well as the trajectory of Covid-19.

For most Irish consumers and businesses the recent  release of tax projections that envisage a fall of 22% in 2020, the largest drop in tax receipts in more than fifty years coupled with public spending rising 19% in the first four months of the year might seem to point in an ominous and familiar direction both in terms of the framing of future policy and the associated difficulties for the Irish economy in terms of incomes and employment.

While the word ‘austerity’ is largely absent from current analysis, concerns around the sustainability of the Irish public finances are likely framing discussions among policymakers and the public at large. Such considerations could weigh further on sentiment and spending plans of households and businesses.

This fiscal hole requires the Government to dig further

If the trend in the public finances in recent months might suggest comparisons with 2008 and 2009, the differences are altogether more striking and, as the EU Commission in its latest forecasts notes, ‘This provides central banks and fiscal authorities with options they did not have during more typical recessions, but also with challenges in terms of the most effective policy tools to deploy at what time’. 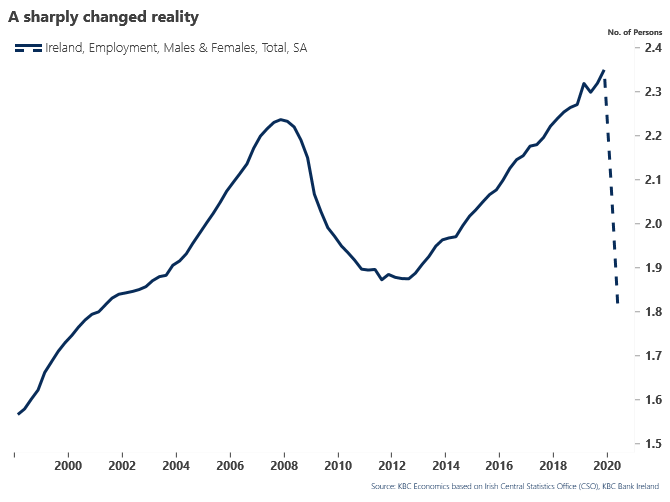 The drop in employment in a little over a month has been about sixty times the scale seen on average through the downturn that followed the financial crisis. As a result, numbers at work in the Irish economy are currently back at levels last  seen around twenty years ago (when the population was more than a million lower).

Clearly, many of those laid off because of Covid-19 will return to work but how many and how quickly those now laid off find employment will depend in no small way on the actions the Government takes to restore the Irish economy towards the growth path it was on before the virus struck.

How big is the bill and who should pick it up?

Moving from an Irish economy growing at close to 5% coming into 2020 to an eventual outturn entailing a decline of anywhere between 5% and 10% implies a hit of between €35 to €50 billion to incomes this year with only about €10 billion of this likely to be made good through a faster growth rate in 2021. The slower the pace of recovery, the larger these losses will be and the longer further shortfalls will be felt.

To move the Irish economy back onto a meaningfully positive economic path anytime soon requires that the vast bulk of these losses are ‘socialised’ through a substantial increase in Government deficits and debt.

For reasons of efficiency and equity, the burden of adjustment should fall on the balance sheet of the sector most capable of bearing it which, at least in terms of domestic sectors, is the State.
The balance sheet of the State is intergenerational in contrast to the notably shorter timeframe relevant to most households and firms. The State can borrow for notably longer periods on notably more favourable terms than other sectors.

The State can also draw more directly on assistance from international institutions to supplement or replace such borrowings. Finally, in the current episode, the economic downturn is primarily policy driven (at least in terms of the immediate catalyst) rather than a reflection of imbalances or other excesses in any domestic sector. Consequently, there is some onus on the State to bear the burden of associated economic costs.

Spend more to save more?

In circumstances where official estimates suggest the Irish public finances could be set for a deficit approaching 6 to 7% of GDP in 2020 and the debt burden from the previous crisis still looms large, it may seem surprising to suggest that a great deal more may need to be done by way of fiscal stimulus. However,  it should be emphasised that the sustainability of the Irish public finances is inextricably tied to the strength or otherwise of the Irish economy. In current circumstances, sensible actions to boost economic activity should ease rather than increase fiscal difficulties.

In a recent paper (IFAC working paper No.8, January 2019, Ivory, Casey & Conroy), the Irish Fiscal Advisory Council suggested that while the precise value may be unclear, a range of estimates imply the ‘multiplier’ linking Irish Government spending and economic activity is modestly above one (ranging between 1.2 and 2.5 in terms of short term impacts depending on the nature of the public spending and model specification).

Given the extent of underutilised resources likely in the second half of this year, in all probability, the current value of the multiplier could be somewhat greater than the IFAC paper suggests. In turn, this suggests, that carefully chosen stimulus measures could materially improve both the Irish economic outlook and the public debt and deficit ratios in current circumstances. By extension, this also implies inaction may prove more costly.

Looking at slightly longer term considerations, the key constraint on Irish fiscal sustainability reflects the capacity for the Irish economy to outgrow the debt burden. As we noted in a piece last year (Collapsing Government borrowing costs to change the discussion on Irish public debt, KBC Bank July 2019), Ireland is almost uniquely favourably placed to do this because of the extent to which Irish economic growth has consistently outpaced the cost of servicing public debt. Once this is the case, the burden of public debt is set on a sustainable path.

Our 2019 analysis suggested arguments advanced by Olivier Blanchard in relation to the role that could be played in the US by fiscal policy applied altogether more forcefully in the case of Ireland (because of a larger and more consistent favourable gap between economic growth and the cost of debt service here than in the US).

The graph below shows how the sharp downturn in Irish economic activity in 2020 temporarily worsens the relationship between interest rates and growth (as was the case a little over a decade ago).

However, even a modest upswing in growth in 2021 would be sufficient to ensure that debt sustainability will return to its more usual positive path given that subdued global conditions mean that interest rates will remain exceptionally low for some substantial period of time, the key issue for policy is to ensure growth prospects are maximised.  While the Minister for Finance is correct to suggest that the mood of the markets may change in time, on most plausible scenarios, the lessons of the past decade here and elsewhere would suggest any such concerns are far more likely to emerge if doubts arise about Ireland’s growth capacity than about the Government’s revenue raising capacity. 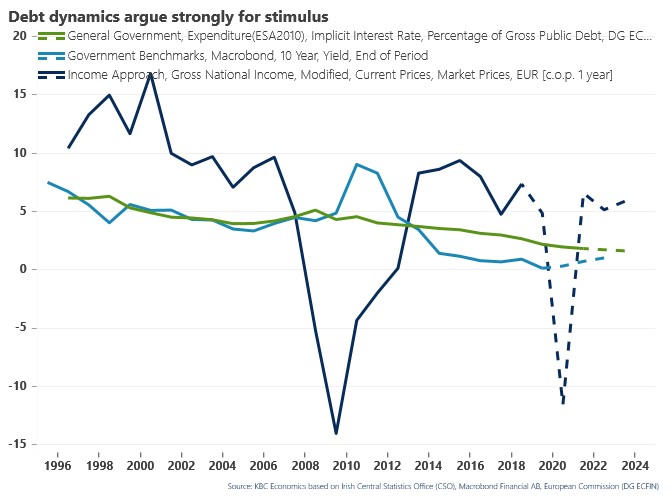 At the beginning of April, we estimated that the fiscal costs associated with the Covid-19 crisis could be in the region of €30 billion. While this figure still appears reasonable, it is clearly the case that risks are weighted towards a somewhat larger outturn in circumstances where the hit to aggregate  income could approach €50 billion. To minimise the costs to the exchequer, the focus has to be on limiting the longer term damage to the Irish economy. This is most likely to be achieved by a further fiscal stimulus that is both early and aggressive.

As we noted previously, the message from the EU Finance ministers statement of March 23 urged Governments ‘..to take all necessary measures … to protect our economies, including through further discretionary stimulus and coordinated action, designed, as appropriate, to be timely, temporary and targeted.’ It is worth considering what each of these considerations might mean for Irish fiscal policy at this juncture.

The need for timely measures should apply equally to underpinning a recovery as it did to the urgent actions to support incomes hit by the lockdown. While the gradual easing of the lockdown argues against any major stimulus in coming weeks, waiting to deliver an October budget encompassing measures that might not take effect until 2021 will almost inevitably mean employment and incomes will be set on a weaker trajectory than is necessary.

In much the same way as a supplementary budget was introduced in early 2009 both to signal and to reduce the widening gap in the public finances, a package focussed on arresting the deterioration in employment could be introduced early in the term of the new Government with a range of measures taking effect in the Autumn. The early delivery of a credible programme for Government encompassing such measures would likely boost recovery and calm markets.

As a key goal for economic policy is to help kick-start a recovery in the Irish economy, the temporary nature of any stimulus should be emphasised. For example a cut in the 13.5% VAT rate  might see it reduced close to zero for the balance of 2020 and 2021, rising to 7% in 2022 and returning to 13.5% in 2023.

A clear commitment towards specific time constraints on policy initiatives would not only ease concerns about the longer term sustainability of the tax base but would also encourage activity to be brought forward. In the same vein, a clear but very gradual tapering of emergency payments aligned to the re-opening of the economy would emphasise a balancing of incentives towards activity with adequate assistance to those in need.

The many demands on the public purse at present emphasise the need to ensure measures are targeted as far as possible. In this context, the overriding focus should be on supporting employment which means that stimulus measures concentrate on firms rather than households. We previously noted that universal measures for households would likely support increased savings for some and likely prove inadequate for the spending needs of others.

Consumer sentiment and spending is more likely to be enhanced by an improved outlook for employment than by artificial and likely arbitrary measures to boost spending. Supports focussed substantially on sectors and linked to sustaining employment instead should allow business to devise measures to encourage customers to return while handling health related capacity constraints.

It should be emphasised that opting for a further early and aggressive fiscal stimulus does not imply the current crisis will not have a lasting negative impact on the public finances and on the Irish economy. However, an early, activist but time-bounded policy stance effectively drawing down future fiscal capacity is likely to offer the best avenue towards minimising long term costs to Irish incomes and hence to the public finances.