…So, limited uptick in purchasing plans suggests consumer spending to bloom rather than boom this summer

These results suggests the shadow of the pandemic is gradually lifting from the economy and, as a result, Irish consumers are becoming less concerned about their current circumstances as well as less fearful about the future.  That is further suggested by the fact that June marks the fifth successive monthly increase in the KBC Bank consumer sentiment index-the first time that has happened since the beginning of 2007.

Four of the five main elements of the KBC Bank sentiment survey posted relatively modest gains in June  relative to their May readings, an out-turn that seems consistent with the view that June marks a further incremental improvement in the mood of Irish consumers rather than any dramatic change in their thinking. In that respect, the phased re-opening of economic activity might be seen as providing re-assurance that the reducing nervousness of previous months had been well-founded.

The re-opening of the economy did contribute to a clear easing in nervousness about the general outlook for the Irish economy in June. This element registered its best reading since November 2018 but, given the long-lasting concerns about Brexit that predated the pandemic, it remains the case that the May survey shows negative views on the economic outlook still slightly exceeding positive views.

There was a marginal improvement in thinking on the jobs market in June. In circumstances where the re-opening of the economy saw many return to work, it might have been expected that this area of the survey would have seen a larger uptick. However, concerns about ‘scarring’ impacts on the employment prospects of those in areas not yet opening may have dampened this element. It should also be noted that, in contrast to the broader economic outlook, the past two months have seen the balance of responses point towards some easing in unemployment over the next two months, the first time this has been seen since mid-2019.

Irish consumers were also modestly less negative in June about the way their personal finances had developed through the past twelve months. This probably reflects the resilience of household incomes which, in turn, likely owes much directly and indirectly to the maintenance of major fiscal supports through this period.

The announcement during the survey period of the phased reduction and ending of these supports through the next nine months may have been one element in the weakening of expectations for household finances through the coming year that was the only negative element of the survey in June. Talk of the possible need for future tax increases, increasing housing costs and growing global concerns about inflation may also have contributed to  this element’s notable divergence from the rest of the survey in June.

A poorer assessment of future financial circumstances may also have weighed on Irish consumers’ spending plans. While consumers judged the buying climate to have improved in June, the increase was relatively modest in the context of notably greater opportunities to spend as the economy re-opens. We would also argue that this points towards a clear but still cautious approach on the part of Irish consumers that might suggest the pick-up envisaged in consumer spending through the summer might be forceful rather than frenzied.

With thoughts now turning to the post-pandemic Irish economy, we asked consumers what they feel are the main problems the Irish economy could face through the next three years. It should be noted that this wording emphasises issues facing the economy as a whole rather than the consumers themselves as individuals.

The results of the responses to this special question are presented in the table below: 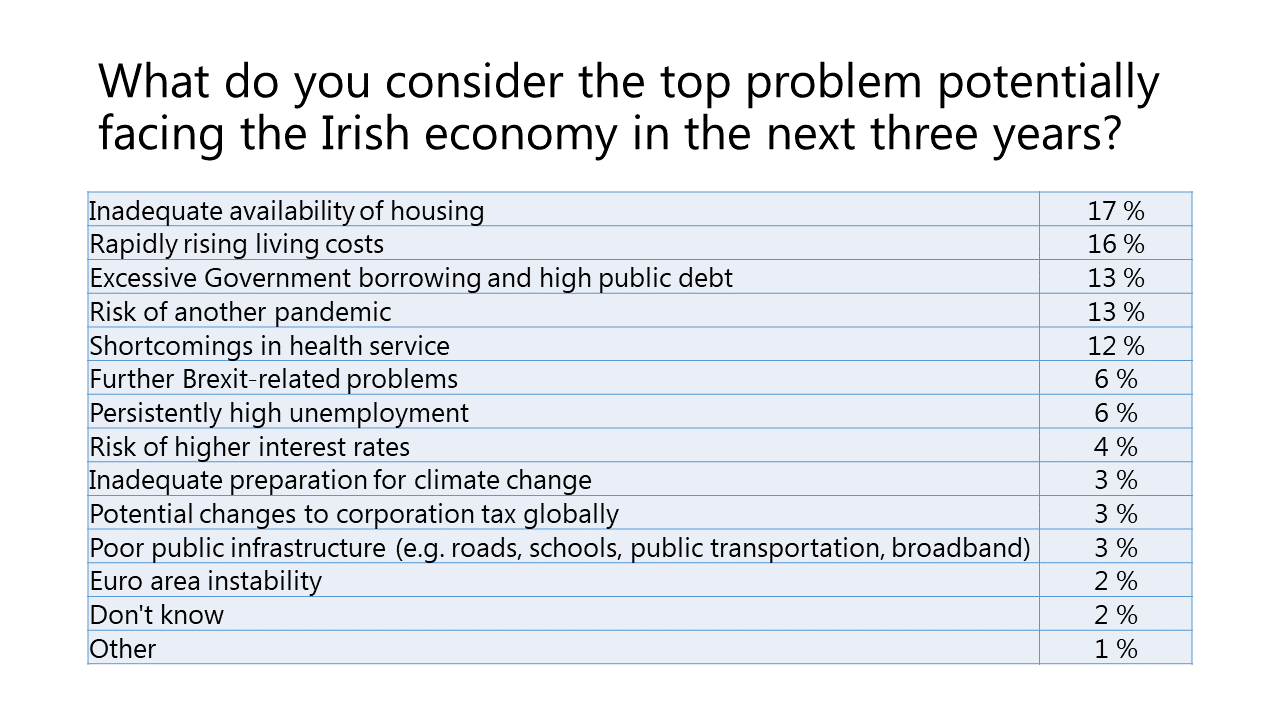 The question asked provided for 13 possible responses, including one option to insert an issue not specified in the list provided. As less than one per cent of respondents offered alternative options to those listed, it would seem that we have captured the major areas of concern to consumers.

The results suggest no single problem entirely dominates the thinking of Irish consumers. In one sense, this is not a surprising result in current circumstances. As the Irish economy begins to transition to a post-pandemic path, a still elevated level of uncertainty allied to large differences in personal experiences might be expected to inform views as to the most notable problems the Irish economy might face in the next three years. In turn, this emphasise the need for a careful consideration of the priorities for domestic policymaking in the months and years ahead.

If the list of concerns was evenly distributed,  each potential problem would be cited by about 8% of consumers. Table 1 suggests that only one issue commands more than twice this ‘average’ problem rating. An inadequate supply of housing, was cited as the most significant potential concern facing the Irish economy by 17% of consumers surveyed.

In part, this prioritisation of housing might reflect the high profile media coverage in recent months of a number of issues around first-time buyer access to the market. More fundamentally, it likely captures the sense that the range and scale of economic and social fall-out from an inadequate supply of housing makes this the potentially most destabilising issue facing the economy at present.

The second most prominent concern relates to rising living costs which was cited by 16% of consumers. This issue becomes even more important if we broaden the analysis to consider items featuring in Irish consumers’ top three concerns. In circumstances where official measures of Irish inflation have been very subdued for some considerable time, this may appear a  surprising result. However, the ‘average’ nature of official inflation metrics may not capture pressures affecting particular groups or particular shopping baskets at a specific time.

As the housing option was worded to focus on supply and we didn’t specifically exclude housing from the heading of living costs, it is likely that it also featured prominently in this context in some of the responses citing living costs as the primary concern.

The incidence of inflation concerns was notably negatively related to age in the survey responses. We might speculate that this both reflects high ‘entry’ costs into a range of areas such as insurance, accommodation, transport and entertainment as well as ‘scarring’ issues, possibly emanating from the financial crisis, that have weighed on the earning power of younger consumers.

Interestingly, concerns about Government borrowing and a further pandemic warranted identical amounts of concern, being cited as the most important risk for the economy by 13% of consumers. Through the survey period these issues commanded substantial media attention and, as the central issues of the past two major crises affecting the Irish economy, it is not surprising that consumers might fear that history might repeat itself and it could be argued that the share of these responses might have been expected to be higher.

Longstanding issues in relation to the health service meant a significant 12% of consumers cited difficulties in this area as what they saw as the primary problem potentially affecting the Irish economy through the next three years. As the table indicates, relatively modest numbers of consumers cited a range of other areas as posing significant threats to the Irish economy in coming years.

Not surprisingly, these responses suggest that a range of risks are concerns for Irish consumers as we emerge from the pandemic. Legacy issues from the Coronavirus in the shape of the health of the public finances and the threat of further pandemics understandably command considerable attention but threats requiring major but nuanced actions around housing and living costs might be regarded as the most pressing policy priority to ensure that a global health crisis isn’t followed economic failings that are intrinsically domestic in nature.