The KBC Bank April consumer sentiment survey showed a sharp but not surprising drop in Irish consumer confidence. The clear message of the April sentiment  survey was that the economic and financial effects were being felt very broadly across Irish consumers.

Some supplementary questions in the April consumer sentiment survey suggest that like the virus itself, the economic fallout is impacting some consumers much more severely than others. Responses to these questions provide some potentially important insights into the spread and scale of problems now being faced by Irish households and what that might mean in terms of framing policy responses that are both efficient and equitable.

Significantly,  the additional questions asked in conjunction with the April consumer sentiment  survey suggest that the capacity of Irish consumers to weather the current financial storm varies markedly. Roughly one in eight consumers could handle a financial emergency costing €1,000 from current income whereas almost as many would be completely unable to finance such a difficulty through any means. This result suggests while the 'macro' impact of the current crisis is broadlyfelt, the severity of 'micro' impacts varies markedly across households.

The survey also highlights that while much of the discussion in terms of the direct demographic impact of the Coronavirus focusses towards either end of the age spectrum, the main economic and financial impact is currently being felt by those in the 35-54 age group, likely reflecting greater financial commitments that this group may have.

How would Irish consumers handle a financial emergency?

One supplementary question asked in the April survey gives a strong sense that the capacity of Irish consumers to weather the economic and financial storm stemming from the Covid19 crisis varies widely across households with potentially significant implications for the required policy response. Another supplementary question highlights the speed and scale with which conditions have changed of late. This means that issues identified as problematic risks in the March survey had transformed into a painful reality in the April responses.

The April consumer sentiment survey contained  a special question focussed on the financial resilience of Irish consumers. It asked how consumers would handle an unexpected financial emergency amounting to €1,000. The question is based on one asked by the US Federal Reserve in its annual survey of the financial wellbeing of US households.

While the nature of the current crisis is notably different to a once-off financial difficulty, the responses may give some sense of divergences in the financial capacity of different consumers to deal with current financial pressures.

The results of the survey of Irish consumers, shown in the diagram below, suggest that:

Among  those unable to pay an unexpected expense of this size at present:

These results emphasise the degree to which financial circumstances vary across Irish consumers. While the survey question was scheduled and intended to relate to circumstances very different from those currently prevailing. However, with a range of Government support measures providing significant support, the framing of the question may give some sense of the capacity of Irish consumers to handle sharply increased pressure on their household finances. 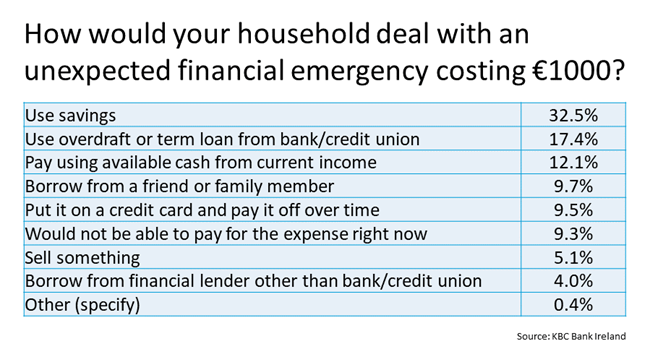 How much have conditions changed and which consumers felt it most?

In the March consumer sentiment survey, we asked a question which aimed to capture the extent to which prospective economic and financial costs of the coronavirus had entered into consumer thinking. The March survey results showed that the vast majority of Irish consumers (86%) realised that the coronavirus would have some impact on the Irish economy as a whole. However, the details suggested that the scale of impact would not translate directly  to their own household finances, as slightly more than half (57%) said the coronavirus would have an effect on their own financial circumstances.

We asked the same question in April and found that in the intervening weeks, Irish consumers have now come to see the impact that the coronavirus on their household finances would be as marked as that on the Irish economy as a whole. In general, the results show: 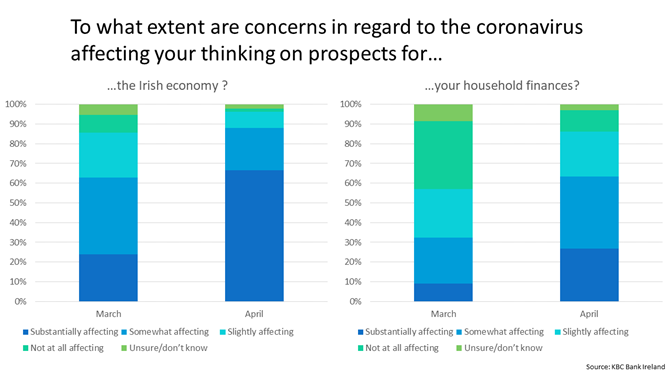