Growth data for the final quarter of 2019 underline the extent to which the Irish economy is currently operating at two distinct speeds. While domestic conditions reflect a recovery that is solid, important elements of the multinational sector are on a trajectory akin to a supernova. This is reflected in preliminary figures for 2019 that show consumer spending rising by under 3% while imports grow 35% and capital spending increases by 99%. 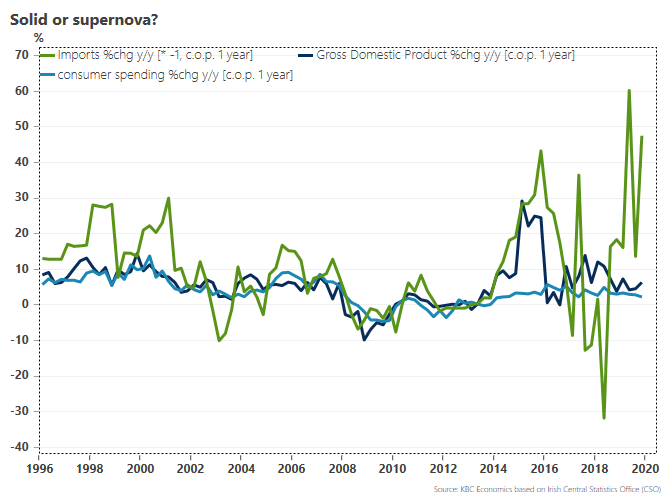 The preliminary official estimate of a 5.5% rise in GDP for 2019 as a whole was somewhat lower than generally expected and below our forecast (+6.0%) but the exceptional increase in Multinational activity through the year coupled with the buoyancy of corporation taxes means there may be some possibility of an upward revision when more detailed data are released in the summer.

The most notable feature of today’s data is a quarter-on-quarter jump of 123% in investment and a related quarterly increase of 34% in imports. Broadly comparable developments were seen in the second quarter of 2019 and in the second quarter of 2017. These changes reflect onshoring of Intellectual property assets ahead of tax changes coming into effect at the end of 2020. For 2019 as a whole, such imports jumped €70 billion to €91.6 billion. It should be noted that these increases in investment and imports offset each other in terms of their impact on GDP. So, there is no immediate impact on GDP. However, these assets should boost the productive capacity of the Irish economy and translate into a stronger growth path.

Largely reflecting  the booming multinational sector,  Irish exports increased by 2% q/q and by 9.4% y/y. This growth was primarily driven by exports of services. In circumstances of faltering global growth in late 2019, this should be seen as a particularly encouraging outcome.

Consumer spending was flat q/q in the final three months of the year and downward revisions to earlier quarters (following a previous upgrade) meant it was only 2.0% higher than a year earlier. In circumstances where employment increased by 3.5% y/y (in full-time equivalent terms) and weekly earnings also grew by 3.5%, this is a surprisingly weak outturn. In part, it reflects an increase in costs well above the official inflation rate. More fundamentally, it speaks of a cautious consumer that is consistent with the weakening trend in consumer sentiment through 2019.  For the year as a whole, consumer spending increased a subdued 2.8%.

A 24% increase in new dwellings in 2019 led a 6.8% growth in construction. As building increased 4.9% q/q in the final three months of the year, momentum in this area remains positive. However, outside specific areas such as Intellectual Property and aircraft leasing, the official release suggests capital spending on machinery and equipment fell by some 9.7% in 2019.

While today’s release shows some unexpected downward revisions to earlier periods, importantly, the quarterly profile shows GDP growth remained strong in the final quarter of 2019 increasing 1.8% Q/Q and 6.2y/y and mirroring buoyant jobs data for the final three months of the year. This positive momentum should provide an important offset to a marked weakening in economic conditions worldwide in 2020 as a result of the Covid-19 virus.

The Covid-19 outbreak is first and foremost a threat to human health and any discussion of economic impacts must reflect this overriding consideration. The degree of uncertainty and rapidly changing circumstances in relation to the scale, spread and duration of Covid-19, and the associated impacts on activity in Ireland and elsewhere impose major limitations on our ability to assess the outlook for the Irish economy in 2020.

Emerging downgrades to forecasts for global growth suggest Irish GDP growth will be materially slower this year than last. The openness of the Irish economy will amplify the impact of poorer conditions abroad as will the importance of  aircraft leasing and the geographic location of significant elements of contract manufacturing for Irish based multinationals.

However, a number of growth supportive factors should also be taken into account. First of all the mechanical link between Irish export growth’ and global demand conditions has reduced at least temporarily of late because of a marked expansion in productive capacity in pharma, IT and medical device sectors related to product life cycles as well as  the ‘onshoring’ of Intellectual Property in a small number of multinational companies. In addition, the less cyclically pronounced  nature of activities in these sectors should also dampen the degree of pullback in Irish exports.

Domestic spending should remain on an improving trend even allowing for significant caution on the part of consumers, in part because of continuing increases in the number of people living and working in Ireland but also because of some easing (at least for now) in the intensity of Brexit concerns.

Drawing on these OECD estimates and using a simple regression equation linking changes in global conditions to Irish economic activity would suggest that the impact on Irish GDP growth could be around 0.6% percentage points in the less severe scenario  and somewhere between 1.5% and 2% in the more severe outcome. The geographic origins of the virus mean the impact on Ireland’s key trading partners is somewhat less pronounced in the less severe scenario but Ireland’s economic openness and the broader ‘domestic’ channels of disruption would likely offset the influence of that factor.

Reflecting these influences (and today’s updated GDP data), we have reduced our 2020 Irish GDP forecast for 2020 from 4% to 3.5%-on the assumption of a less severe scenario for the Covid-19 outbreak.