Irish GDP data for the first quarter of 2021 suggest the economy began this year with exceptionally positive momentum overall but the outsized headline growth number of 7.8% q/q disguises major differences in the conditions faced by different sectors of the economy. Activity in multinational dominated sectors expanded by 17.9% in the quarter whereas domestic-focussed sectors shrank 2.1%.

The stark divergence in activity across sectors of the Irish economy is clearly illustrated in diagram 1 below which shows how the current level of spending compares with the final quarter of 2019 before the coronavirus struck. Whereas Irish exports are 17% higher than their pre-pandemic level, consumer spending is down 12.4% and investment in construction is down 16.5%. 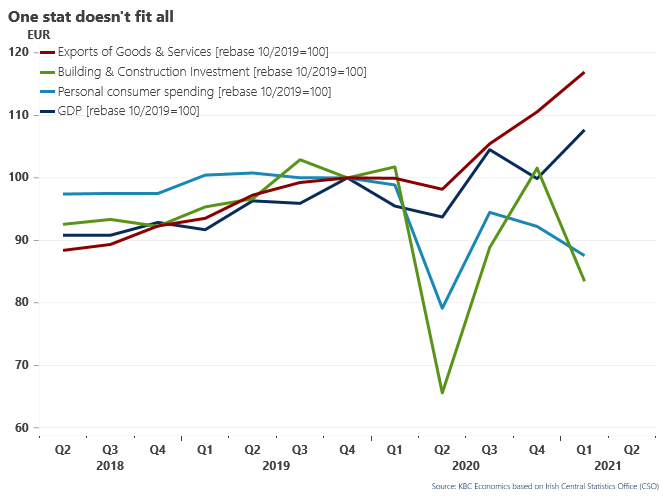 Overall, the 7.8% increase in headline Irish GDP q/q in the first quarter of 2021 is altogether different to recorded declines of 0.6% for the Euro area and 1.5% for the UK and also notably stronger than the robust 1.6% increase recorded in the US (which translates to 6.4% on the annualised basis usually quoted for US GDP).

There is broad agreement that the Irish economy is likely to post strong GDP in 2021 and that this will continue into 2022. We continue to see GDP growth of around 5% this year albeit with significant upside risks to this number (we will re-assess this estimate when a more complete set of 2020 data are released next month). However, we think it is far more important to emphasise the degree of variation in relation to both the speed and spread of this improvement across the Irish economy.

More generally, positive pandemic-related demand effects should underpin momentum in key Irish export sectors such as pharma and ICT.  A less disruptive Brexit than might have been feared should also support a range of ‘indigenous’ Irish exports. The fact that exports were 17.9% higher in the first quarter of 2021 than a year earlier suggests that risks may lie significantly to the upside in relation to this element of activity.

While it is expected that 2021 will be very different to 2020 in that domestic spending should reverse much of last year’s weakness, there is significant uncertainty as to how strong and speedy the rebound in domestic economic activity will be. There are some differences across forecasters on the likely impact of (a) a relatively slow easing of health restrictions and  (b) the scale and speed of the release of excess savings built up because of curbs on consumer spending through 2020 and into early 2021.

Our assessment is that 2021 growth will benefit from a relatively rapid speed of ‘opening-up’ impacts. Irish consumer spending was relatively weak in 2020 primarily reflecting 'lock-downs'. The household savings rate increased to 24% in 2020 compared to a twenty-year average of around 10%. We tentatively estimate the savings rate in the first quarter of 2021 was close to 30%. Reflecting this, consumer spending was 5.1% lower in the first quarter than the final quarter of 2020 and 11.9% lower than a year earlier.

We take the view that the release of ‘pent-up’ consumer demand will be speedy but may possibly be short-lived, particularly if the unwinding of temporary fiscal supports reveals elevated levels of joblessness. So, while we see consumer spending increasing by 5% to 6% in both 2021 and 2022, the increase in 2022 significantly reflects carryover effects from an expected strong consumer spending in the second half of this year. This rebound may fall some way short of a fully fledged recovery and threaten some significant shortfall or ‘scarring’ in employment in some consumer-focussed sectors.

We would also highlight the continuing weakness of construction investment in today’s data. As diagram 2 below illustrates, while investment in housing has increased in recent years, it still falls markedly short of the levels needed to deliver a material improvement in housing market outcomes.

Although data limitations emphasise the tentative nature of these calculations, we estimate that the restriction-curtailed quantum of investment in dwellings in Q1 was in the region of 2% of modified Gross National Income whereas a figure in the region of 4 to 5% of modified GNI would be needed to move output towards the scale that would meet natural demand for housing.  Diagram 2 also suggests that on its current trajectory,  housing investment is unlikely to reach a 4 to 5% share of modified GNI in the foreseeable future. 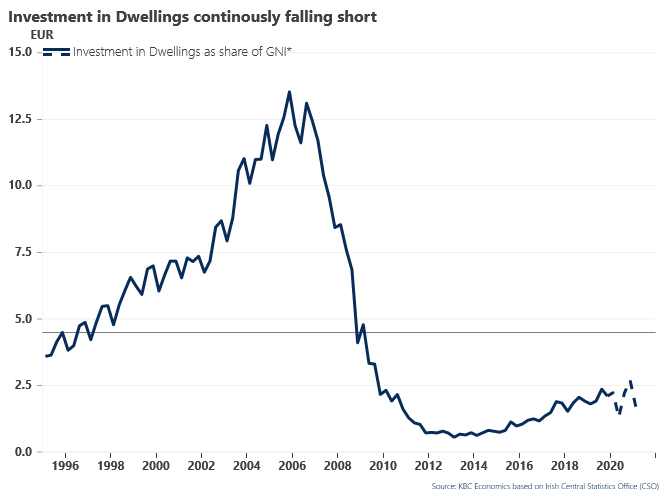 The extreme divergence in today’s data between the buoyancy of exports on one side and the weakness in consumer spending and construction investment on the other emphasises both the need for sustained but focussed fiscal policy support as well the availability of ‘fiscal space’ delivered by strong headline GDP growth and the associated resilience in tax revenues (in addition to the curtailment of EU fiscal rules for 2022). This argues for significant further initiatives in Budget ’22 to set the Irish economy on a more balanced and sustainable path.