Subdued sentiment hints at recovery that over-promised and under-delivered

Irish reading at odds with improved confidence in other countries

A largely unchanged consumer confidence reading in February seems to reflect a balance between important but opposing influences that emphasises the confusing nature of Irish economic circumstances at present. Irish consumer effectively held steady as reduced nervousness about the outlook for the Irish economy broadly offset ongoing concerns about household finances.

The KBC Bank Irish consumer sentiment index ticked down to 85.2 in February from 85.5 in January, a marginal decline that does not suggest any statistically significant change in the mood of Irish consumers .

The stable Irish confidence outturn for February contrasted with more upbeat readings elsewhere.  A marginal improvement in the preliminary consumer sentiment reading for the US and a marked improvement in the corresponding figure for the EU meant that both of these surveys are now well above their long term averages whereas the Irish index is now slightly below its long term average of 87.9.

On this basis, it would appear that consumers in the US and across the EU as a whole now see their glass as more than half full. In spite of some recent improvement, Irish consumers remain concerned about problems whether these relate to their current reality or looming risks. This translates into an Irish consumer sentiment reading that sees the glass as (more than) half empty.

We previously noted how Brexit concerns likely explained a significant element of the subdued tone of Irish consumer sentiment readings in recent years. However, we also repeatedly indicated that those worries don't fully explain the pronounced lack of any ‘feelgood factor’ among Irish consumers, an absence  that might appear at odds with the sustained strength seen in key Irish economic indicators such as last week’s buoyant jobs data for the final quarter of 2019.

As the diagram below illustrates, consumer confidence has been trending lower for the past year and a half while positive momentum in the jobs market has remained impressively strong. We continue to take the view that an element of ‘growth envy’ is weighing on consumer sentiment at present as glowing commentary on Irish economic conditions has not been seen to deliver correspondingly marked improvements in the circumstances the average Irish consumer. 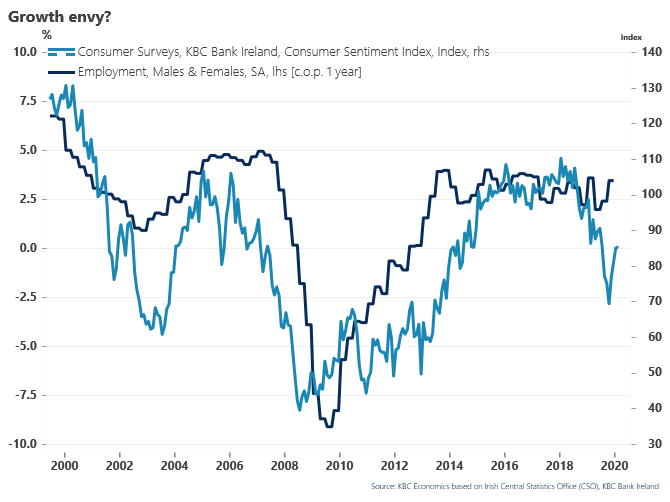 It might be argued that the perceived under-delivery of the recovery from an Irish consumer perspective could owe something to unrealistic expectations that might stem from a belief that the gains seen through the early 2000’s should represent the reference point for the scale of improvement that might be expected in a recovery. However, such ambition is unlikely to reflect the thinking of most Irish consumers.

Instead, as the details of the sentiment survey have consistently suggested, it simply seems that progress at the level of the individual household from the conditions experienced through the 'austerity years' has fallen short of improvement heralded in much economic commentary.

There is also the important but undermentioned issue of aggregation that can conceal important differences in the performance of the economy as a whole and the circumstances of the individual consumer. Official data suggest household disposable incomes in aggregate are now about 15% in nominal terms than the previous early 2008 peak. This figure slips to a notably more modest 5% increase when adjusted for the increase in population in the interim. However, if we use CSO data that suggest the number of households has increased faster than the population through the past twelve years, it transpires that the disposable income of the average household is still 2% less than in early 2008.

Moreover, through the recovery period of the past years, the annual increase in income per household  has averaged just 2.4% in nominal terms compared to an average 10.8% increase in nominal GDP over the same period.  The limited pace of recovery in average incomes and the marked shortfall relative to GDP likely informs a view that the Irish economic recovery has significantly underdelivered for many Irish consumers.  As the diagram below indicates, the more muted gains in the circumstances of the average Irish household broadly corresponds to the trend in consumer sentiment. 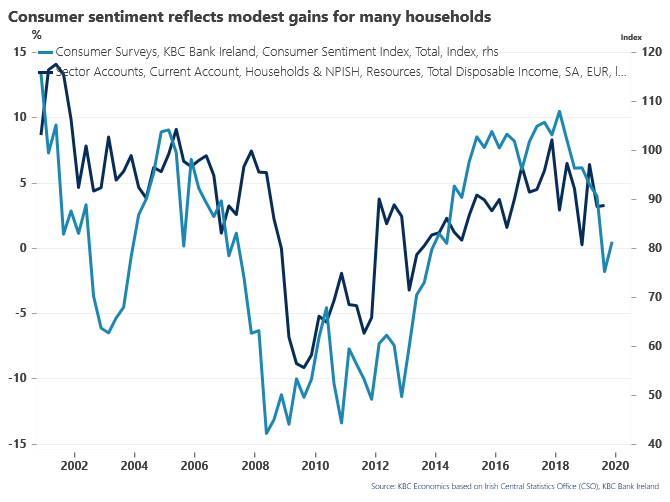 In circumstances where Irish inflation has averaged less than 0.5% through the recovery period, it might be suggested that Irish consumers could be underestimating the improvement in their  ‘real’ spending power. However, our sense is that consumers’ assessments of purchasing power puts substantial weight on access to housing (or difficulties in this regard that imply an importance beyond their weight in the household budget survey). In this context, the substantial and exceptional weakening  in homebuying and rent affordability suggested by the diagram below informs a broadly based view of sustained pressure on living standards for significant numbers of Irish consumers.

The details of the February consumer sentiment survey appear broadly consistent with such a judgement. Roughly one in five consumers says that their financial circumstances improved in the past twelve months and  (in responses to a separate question) a similar number envisage an improvement in the next twelve months. Broadly similar numbers report a recent or expected weakening in their personal finances. So, approximately 80% of Irish consumers don’t see buoyant Irish economic growth currently boosting their financial circumstances. This broadly based sense of remoteness from reports of a booming economy is fostering a troubling undercurrent of ‘feel-bad’ in the mood of Irish consumers at present. 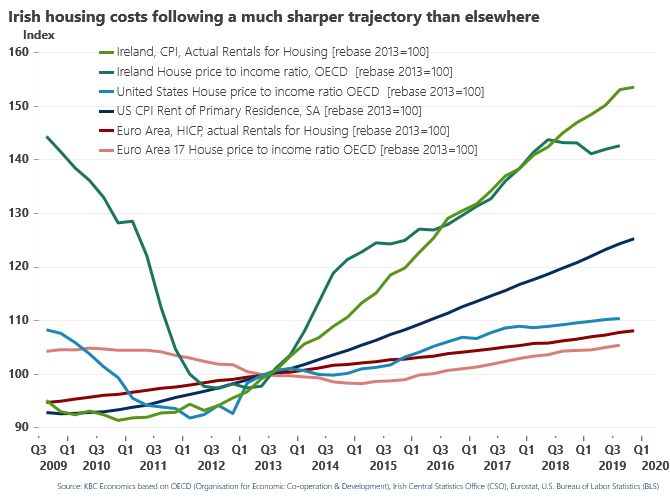