While the monthly increase of 0.7% in March appears relatively modest compared to the trend seen through the past twelve months, this is at least partly a reflection of a seasonal tendency towards smaller monthly increases in the early months of the year. Correcting for this, the annualised rate of increase in the first quarter of 2018 is in the region 13%, implying that current momentum in Irish residential property prices remains formidable.

The rising trend in house price inflation of late has occurred in spite of a modest improvement in supply as new output in 2018 is still expected to be at least a third below the level needed to meet ‘normal’ demand. However demand at present is well above normal levels reflecting  the emergence of pent up housing needs which had built up substantially through the past seven or eight years.  While the gap between demand and supply is likely to close, this process is unlikely to be smooth or speedy, implying continuing upward pressure on prices in the near term.

While the upswing in Irish house prices like the broader economic recovery is now broadly based, the intensity of the pressure on Irish house prices  continues to reflect regional differences in demand and supply conditions and, in particular, notable variations in the strength and spread of ‘local’ economic activity.

As diagram 1 below indicates, the cumulative increase in property prices since January 2010 (when this breakdown became available) is notably greater in Dublin but the current pace of increase around the capital is still broadly comparable with most other parts of the country.  Only in the case of the West and Mid-east areas is there an indication that a ‘catch-up’ process is now underway. In these areas, the catch-up likely owes something to a spill-over from urban centres driven by affordability constraints.

While it is entirely understandable that the primary focus of attention should be directed towards ensuring adequate housing and avoiding a repeat of the recent boom to bust episode, it should also be noted that, as recent Central Bank research highlights, the recovery in Irish residential property prices has had a significant impact on the financial circumstances of Irish households at the aggregate level (obviously the circumstances of individual households vary according to their housing tenure but we are focussing here on the overall ‘macro’ impacts).

The diagram below compares the trend in Irish house prices to the estimated value of the stock of housing assets held by Irish households. For completeness, we also included the trend in the outstanding stock of housing related lending to give some sense of property ‘net worth’. We estimate that the 12.7% increase in house prices in the year to March has been the main driver of a roughly €60bn increase in the value of Irish residential property assets over this timeframe. In the context of aggregate household disposable income in the Irish economy of around €103bn in 2017, this is a notable development (although one should always be careful comparing incomes to changes in wealth).

With the stock of housing related lending broadly stable and Irish consumer spending still notably subdued, there is little indication that this positive wealth effect is translating into any significant financial or economic ‘exuberance’ on the part of Irish households at present. Instead, the relatively subdued trend in consumer spending and sentiment suggests that Irish households remain relatively cautious in their perspectives on the housing market reflecting recent painful history and in spite or possibly because of the current momentum in Irish house prices. 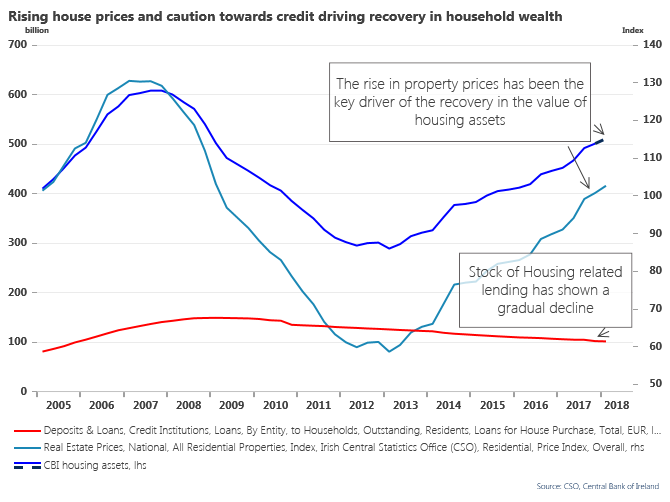