Irish retail sales (excluding cars) data for March show an exceptional year-on-year increase of 8.2% in volume terms but this comparison is significantly flattered by the particular weakness of March 2018 data when Storm Emma significantly curtailed spending. (The acutely seasonal nature of car purchases means it is preferable to look at retail sales excluding cars to get a sense of the underlying trend in Irish consumer spending.)

For the first quarter of 2019, retail sales excluding cars are up a strong 6.0% on the previous year, the strongest pace since late 2017 but new car registrations were down 7% (and when included in retail sales this translates to a 2.9% y/y increase in the first quarter,  the weakest pace in a year) . Taken together, these data suggest Brexit related concerns haven’t undermined spending although they may have introduced a measure of caution in relation to some ‘big ticket’ purchases.

These data are very healthy but they certainly don’t suggest any major spending splurge when account is taken of both increased incomes and increased numbers of consumers in Ireland. The most recent data available indicate that economy-wide household spending power was up 6.4% y/y in nominal terms in Q4 2018. This suggests incomes are growing notably faster than spending as today’s figures show a 4.3% rise in the value of retail spending (excluding cars or 2.0% including cars) in Q1 2019. So, the key drivers of strong retail sales at present are the health of the jobs market and price discounting rather than any boom in borrowing.

The pick-up in the volume of Irish retail sales in Q1 is partly a reflection of heavier price discounting. As diagram 1 below indicates, there is a strong negative correlation between months showing strong increases in the volume of retail sales and months where there have been notable reductions in retail prices. Indeed, in March 2019, there was a monthly rise of 1.2% in the volume of retail sales but this likely reflected a fall in retail prices of 1.1% month on month. This correlation would suggest the Irish consumer is strongly price conscious and responding to significant competitive pressures within Irish retailing. 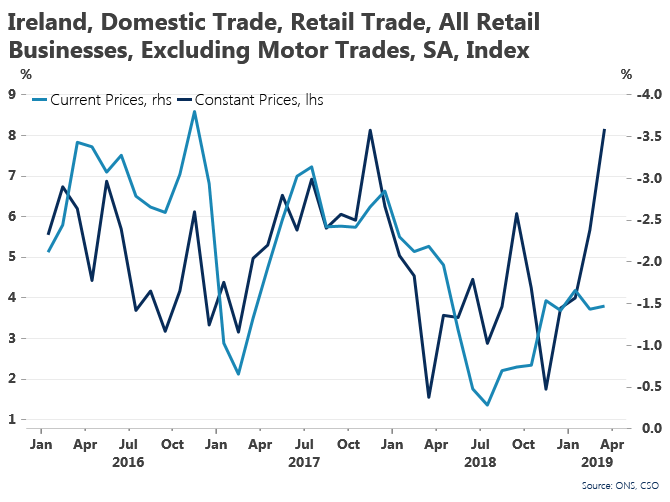 As has been the case for some time, the areas with the highest volume growth rates are furniture and lighting (34.3% y/y) and electrical goods (22.4% y/y). These outturns reflect strong and distinct drivers although the replacement cycle is likely a common influence on the strength of spending in both areas.

The nature of the recovery in the Irish housing market means that the buoyancy housing related retail sales are a reflection both of home sales and improvements undertaken by those not in a position to purchase. Similarly, the significance of home improvement projects is suggested by the continuing strong growth rate in hardware, paints and glass (16.4% y/y). Home improvement considerations may also be driving strong demand for electrical goods but technological change and falling prices are more important factors.