Unemployment now below 8% and could fall below 7% by end year.

Irish jobs data for the first quarter of 2016 show employment growth remained strong in early 2016, at a time when there was a slight softening in the pace of jobs growth in the US and UK as diagram 1 indicates. An extra 46,900 people were at work in the Irish economy in early 2016 than twelve months earlier. The year-on year increase in employment was 2.4%, up from 2.3% three months earlier. Indeed, the quarterly increase in Irish employment picked up to 0.8% (equivalent to a 3.2% annualised rate) from 0.3% in the previous quarter, suggesting forward momentum has remained very healthy of late. 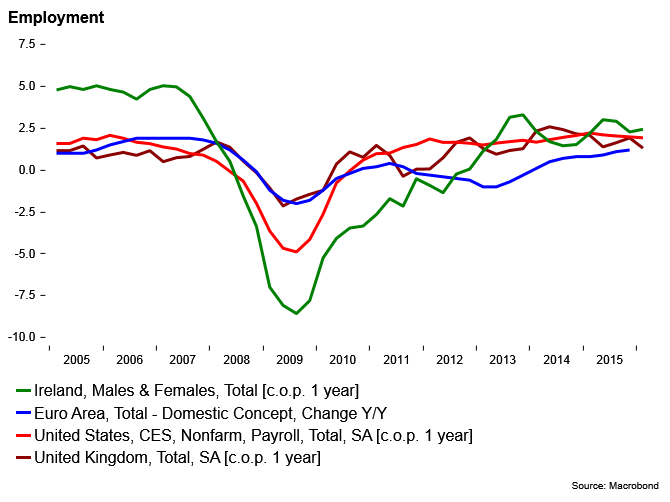 Our sense is that the quarterly acceleration partly reflects a correction from a reading that we think was affected by widespread flooding in the final months of last year. More importantly, it seems consistent with a strengthening trend in domestic spending of late that is now translating into healthier job creation in related sectors.

We expect generally positive job market conditions to persist through 2016 although we wouldn’t be surprised if increased uncertainty of late weighed on second quarter hiring. We continue to forecast net job gains of around 49k or 2.5% of the labour force for the year as a whole.

While the pace of employment growth in early 2016 wasn’t too surprising, the fall in unemployment was larger than expected, with the quarterly jobless rate dropping to 8.3% from 9.0% in late 2015.  As a result, we have decided to reduce our forecast of an average jobless rate for 2016 from 8% to 7.7%. Indeed, on current trends, Ireland’s rate could fall below 7% by the end of this year.

The relatively sharp fall in unemployment likely owes something to the recent pick-up in domestic spending as the associated recruitment needs tend to be less specialised than might follow, for example, from strength in ‘tech’ exports. In addition, it seems that the pace of increase in the Irish labour force remains relatively modest and the sharp drop in participation in the labour force that followed the recent crisis is not being reversed rapidly. 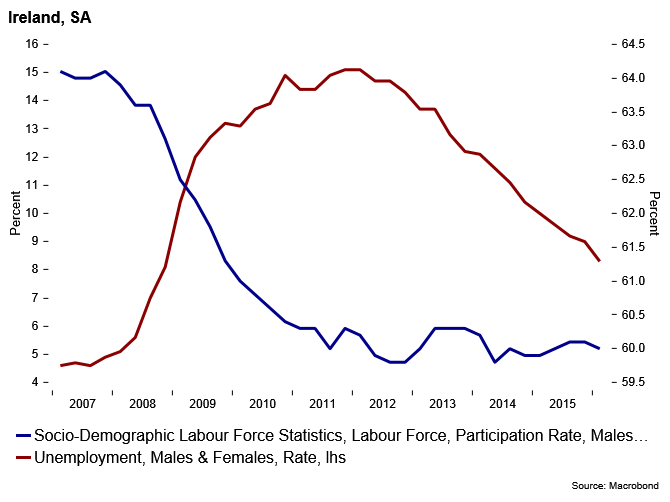 The contrast between the dramatic improvement in unemployment of late and virtually no increase in the share of the population active in the Irish labour market is shown in diagram 2 above. This divergence owes something to a slightly older population as well as increased participation in education but we would expect the persistence of healthy job market conditions to translate into a gradual increase in participation rates in coming quarters. We also expect net emigration to end this year and a trend towards net inward migration to resume and boost the labour force.

A notable feature of the first quarter jobs data is the split between full and part-time employment. As diagram 3 indicates, this breakdown can be quite ‘choppy’. However, after a particularly sharp fall in fulltime employment in 2009, the initial improvement in the Irish jobs market was more clearly seen in part time employment. A stronger trend in fulltime jobs became established through 2013 and 2014 reflecting greater confidence in the durability of the upswing. Through the past year part time jobs growth has again become more prominent and this trend became stronger in early 2016. 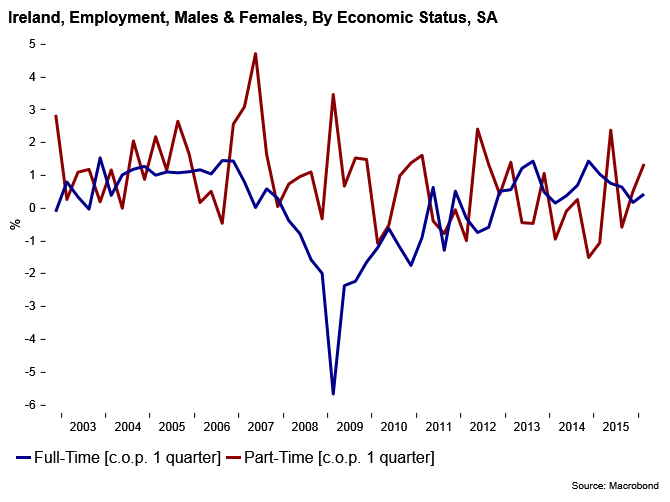 It would seem that the rise in part time employment of late primarily reflects structural rather than cyclical changes in Irish economic conditions. A breakdown of the additional 16.3k part time workers in the past twelve months shows there was an increase of 32k in those classified as part-time not underemployed and a drop of 15.7k in those who regard themselves as part time underemployed. Of course, the near 24-7 and multi-peaked nature of many elements of business activities now means that the associated employment relies heavily on part-time staff. A notably stronger pace of increase in female employment (+3.2%) than male employment (+1.8%) would also seem consistent with this development.

A key question that the data don’t answer is whether these ‘structural’ outcomes simply reflect the ‘new normal’ in terms of a requirement for notably increased flexibility or, instead, reflects distortions or difficulties in various areas such as childcare or personal taxation, for example, that encourage particular labour market behaviour at present that might be improved upon. Our sense is that the absence of a stronger recovery in the participation rate at least hints at scope for improvements in this regard.

While the economic recovery has become more broadly established through the past year, there are still marked regional differences in the spread and strength of the upswing. On a regional basis, positive jobs growth was seen in 6 out of the eight NUTS3 planning regions, with counties in the west and mid-east both reporting lower employment than in early 2015. Of the overall increase in employment of 46.7k, some 28.8k of the net gains were recorded in Dublin. This meant the capital posted a rise in employment of 4.6% whereas the rest of the country recorded an increase of 1.5%. This emphasises the task the new Government faces if it is to meet its target of delivering two thirds of projected job gains outside Dublin in coming years.