Strong Irish GDP growth in 2020 in spite of late slippage

Ireland likely to outperform the world in GDP growth for 2020

Irish economic activity remained resilient through 2020 with a positive GDP growth rate of 3.4% likely to prove the strongest outturn across the global economy. As the diagram below illustrates, this figure is very much at odds with the performance of advanced economies where significantly negative growth was the norm last year. 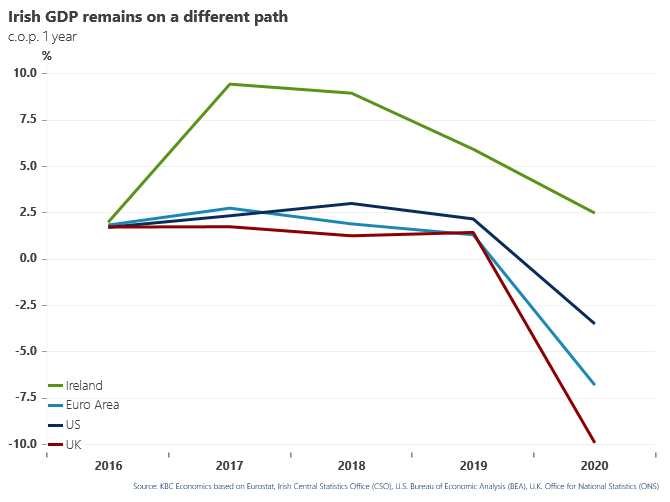 The scale of the 5.1% quarterly drop in GDP in the final quarter of the year is somewhat surprising, particularly the weakening in industrial  output. We wouldn’t overemphasise this number given the extreme volatility in the quarterly data and we wouldn’t be surprised to see future revisions in this regard.

That said, the softness in the final months of the year does underline the importance of continuing policy support for the Irish economy to move onto a solid and broadly based growth path in coming years and avoid unnecessary ‘scarring’ afflicting particular areas, activities or age groups.

The increase in Irish economic output in 2020 as a whole is largely the result of the buoyant performance of the multinational sector heavily focussed on Pharma and ICT where, if anything, the pandemic underpinned rather than undermined demand. Irish industrial output increased by 15.3% and the output of the ICT sector was up 14.2%.

Notwithstanding more difficult export markets for more traditional sectors (as reflected In the significantly negative GDP outturns for key trading partners in the diagram above or CPB estimates that suggest world trade declined by 5.3% last year), the multinational sector drove a 6.2% increase in Irish exports in 2020.

While the multinational sector was the key driver of the positive outturn in 2020, domestic activity also weathered the storm better than feared. Modified domestic demand which measures underlying domestic activity (by excluding large scale multinational capital spending) fell 5.4% last year, defying widespread fears of a decline as much as three times as large and, as the diagram above suggests, outperforming aggregate economic activity outturns for the Euro area and the UK.

To a significant extent, the much better than feared outturn for domestic activity reflected substantial fiscal support that underpinned positive household income growth and drove a 9.8% increase in public authorities purchases of current goods and services. Against that, health related restrictions and uncertainty about the outlook resulted in a marked 9% drop in household spending and also a 9.1% fall in building and construction investment.

As the diagram below indicates, the trend in Irish consumer spending through 2020 closely mirrored the trajectory of the Coronavirus and related restrictions on activity. By underpinning incomes, fiscal measures supported sentiment and purchasing power and prevented the risk of a self-feeding collapse in confidence and consumer spending. As a result, aggregate savings increased sharply. While we would not expect a consumer boom in 2021 when social interactions normalise, we do expect a strong recovery in consumer spending to take hold. 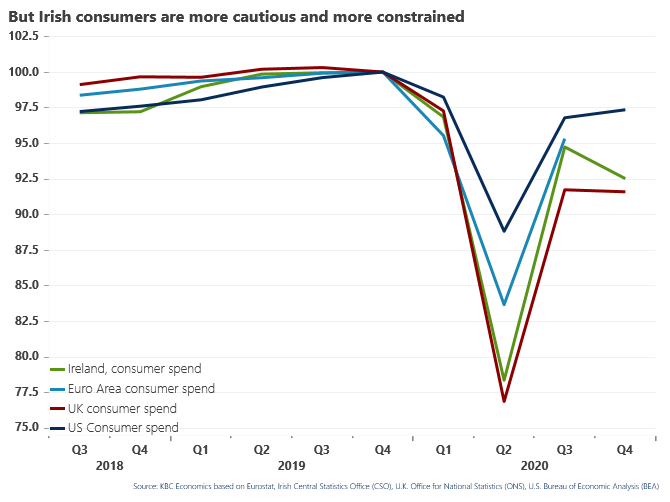 For 2021, we see Irish GPD growth of about 5% as domestic spending gradually normalises and strong  momentum in multinational activity persists. In a global context, this would represent an exceptionally positive performance but to underpin sustainable solid and, importantly, broadly experienced growth ongoing fiscal support will be required.

As the diagram below illustrates forcefully, while Ireland’s overall positive growth rate in 2020 was underpinned by large, high value-added and dynamic multinational businesses,  the sectoral breakdown of economic activity for 2020 shows this was accompanied by substantial weakness across a range of areas that may not automatically return to robust health in coming years. In this respect, current conditions reflect, as Minister for Finance, Paschal Donohue, noted in a speech yesterday, a classic ‘asymmetric shock’ which can be addressed by appropriate fiscal policy measures.

The strength in Irish GDP in 2020 means that the General government deficit is likely to be 5% of GDP rather than 7.4% initially projected just under a year ago when the pandemic first struck. More significantly, the debt/GDP ratio at end-2020 is likely to be a shade under 60% of GDP compared to the initially estimated 69%.  Importantly, this is not just a matter of stronger GDP translating into a larger denominator. The buoyancy in GDP also meant tax revenues fell €2bn in 2020 rather than the €10bn drop initially envisaged. These developments give Ireland important but not unbounded fiscal space that means the policy priority should now be on balancing the economy rather than balancing the books.