Fresh jobs data for the third quarter of 2019 show an impressive increase of 2.4% y/y (which translates to an extra 53,700 people at work). The increase of just under 0.8% between the second and third quarters (+17.300 jobs) which translates into an annualised increase of 3.0% suggests there has been no loss of momentum of late in spite of notably increased nervousness about the global economy in general and Brexit in particular. As the diagram below indicates, jobs growth in Ireland continues to run at about twice the pace being seen in our key trading partners. 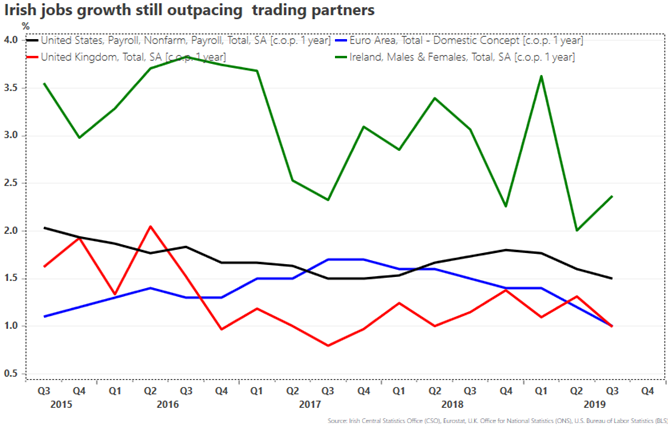 However, there are signs of gloom as well as boom in the details of the latest jobs data. Hiring trends seem to vary markedly from region to region and from sector to sector suggesting the economic temperature varies markedly across the country. On a regional basis, jobs growth in Dublin at 3.1% y/y in the third quarter was clearly faster than across the rest of Ireland (+2.0%) but the picture is not simply one of capital gains as faster increases were seen in the west (+5.3%)and mid-east regions (+5.0%) while the South west(-1.3%) and Border regions (-0.9%) both recorded lower employment levels.

The picture of multiple jobs markets moving in different directions is also suggested by the sectoral employment breakdown. Numbers at work were lower than a year earlier in in five sectors while nine registered increases. A trend decline in Agricultural employment continued (down 5.5k y/y). There were also clear signs of weakness in accommodation and food services (down 4.2k) likely reflecting Brexit concerns possibly amplified by the increase in VAT.

Brexit worries may also have acted as a restraining factor contributing to the flat outturn in wholesale and retailing employment. Similarly, at the margin, a more cautious approach may also have curbed the increase in construction jobs (+3.5k y/y) although it may be that skill shortages played a role in this regard as there was a surprising (and potentially sampling-related) 16.2k fall y/y in the skilled trades occupational group.

The largest sectoral jobs gain over the past twelve months was in Education (+13.2k) and together with a 10.2k increase in public administration jobs may suggest a marked step-up in employment in the public sector. Numbers working in Finance, Insurance and Real Estate also increased markedly (+13k) while there was also an encouraging gain in jobs in industry (+9.7k).

Significant variations in sectoral and regional job trends of late go some way to explaining the coincidence of robust ‘macro’ data and downbeat surveys at present in an Irish economy  experiencing both boom and gloom. Differential prospects might also be contributing to a trend slowdown in labour force growth in the past year to a 1.6% pace in Q3 and a trend increase in numbers outside the labour force to 1.9% in Q3. However, this outcome is substantially a reflection of demographic factors with numbers of retired workers up 4.5% and students up 4.3%.

The aggregate strength of the jobs market has seen Irish unemployment drop to 4.9% in Q3 2019 from 5.7% a year earlier. While this represents the lowest quarterly figure in twelve years, it is also higher than the current unemployment rate in nine EU states. So, there may be scope for some further decline in unemployment without major overheating risks particularly given the divergent nature of current jobs market conditions across sectors and regions of the Irish economy.

The strength of job market conditions in certain areas is also  prompting significant increases in net inward migration. As a result, the Q3 figures show employment among Irish nationals up from 1.8% while jobs growth among non-Irish nationals was up 5.2%. For this reason, the main focal point for overheating concerns is the housing market and the rental sector in particular. The stark contrast between the elasticity of labour supply and housing supply continues to be a key issue in terms of running the Irish economy ‘hot’ enough to ensure broadly based but sustainable gains in employment and incomes. The same sectoral and regional variations imply discussion of what might be the Irish economy's ‘full employment’ level needs to be notably more nuanced now than it has been in the past.