Exchequer returns for end 2015 testify as to the exceptional momentum of the Irish economy at present and also underline the extent to which the health of the public finances is determined by the health of the broader Irish economy. As diagram 1 below emphasises, the key to ensuring a sustainable trend in the Irish budget position is to ensure the Irish economy stays on a sustainable path. It would be very helpful, but also very surprising if upcoming political debate focussed on policy parameters would be most likely to deliver such an outcome.

The most immediate impact of today’s numbers may be to encourage a further step-up in pre-election promises of lower taxes and higher public spending. There is likely to be some limited fiscal space in the coming years as well as a strong rationale for actions that enhance economic and social potential. However, ensuring public spending and taxation are set on sensible and sustainable paths may not be the centrepiece of political debate in the next couple of months. 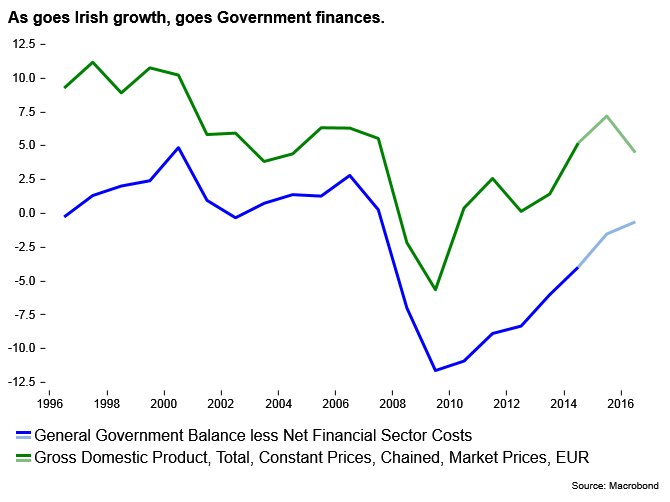 Today’s Exchequer data focus on central government and also reflect a number of once-off transactions (most notably receipts of almost €3.2 billion from the sale of state investments in Bank of Ireland and AIB). As a result, the decline in the Exchequer deficit from €8189 million in 2014 to just €62 million in 2015 significantly exaggerates the extent of the improvement in the Budget position.

That said, these figures do point towards a marked improvement in the health of the Irish public finances. We reckon these numbers point towards a General Government deficit of about 1.5% of GDP in 2015, a little over half the target originally envisaged for last year. Reflecting the current momentum in the economy, we reckon that borrowing could fall to about 0.5% of GDP in 2016, about a year ahead of schedule and, on EU conventions, effectively implying that a broad balance in the public finances has now been attained.

The key driver of the notably better fiscal out-turn was the strength of tax revenues which ended the year some €3.3 billion above the estimates made in Budget 2015. With Government borrowing costs some € 718 million lower than envisaged, this meant public spending could be boosted notably in the final months of the year (+€1439 million higher than originally profiled for the year as a whole) while still achieving a notably lower out-turn for borrowing.

The most encouraging aspect of today’s numbers is evidence of the strengthening and spread of the emerging upturn in the Irish economy as seen in the performance of tax revenues. Clearly, a dominant influence is the buoyancy in corporation taxes which were 50.2% higher than in 2014 and 49% above profile. This accounted for €2.3 billion of the €3.3 billion tax overshoot. The Department  of Finance has reiterated that this largely reflects improved trading conditions and the strength of exports in 2014 (+12.1%) coupled with exchange rate movements, as well as the emerging turn in domestic demand would imply a notably healthier business environment.  While there may be significant company specific factors at play, there are reasonable grounds for believing a broadly healthy trend in corporate tax receipts can be sustained.

More significantly, the December returns show a broadly based pick-up in taxes that is consistent with a more broadly felt upturn in activity. Eight of the nine main tax headings show end year outturns ahead of profile (capital acquisitions tax receipts matched expectations) and those related to household incomes and spending were particularly encouraging.

Income taxes were up 7.0%, some 2.1% ahead of profile and 22.5 % ahead of profile for the month of December alone. With PRSI receipts up 8.0% in 2015, these numbers emphasise the improvement in the jobs market in Ireland. This is also evident in unemployment data also released today. Ireland’s jobless rate has fallen from a peak of 15.2% in January 2012 to 8.8% in December 2015.  On current trends, unemployment could drop below 8% by the end of this year.

Importantly, most of the forces supporting this improvement in the Irish economy and, consequently, in the public finances seem likely to remain in place in the year ahead. Local economic clouds have silver linings. Irish government borrowing costs should continue to be restrained by an uncertain global outlook while a competitive Euro exchange rate and solid domestic demand in the US and UK should support Irish exports. We see jobs growth in Ireland of around 2.5% in 2016, only marginally down on the increase seen in 2015 which we estimate at 2.7%. Significantly, some pick-up in earnings growth should broaden the improvement in spending power.  As a result, the Irish economy is expected to deliver clear gains in activity, incomes and employment in 2016. In turn, this should see Ireland’s public finances move very close to balance in the coming year.