Covid-adjusted unemployment rate of 20.4% hints at scale of downside risks to Irish economy

Budget ’21  €3.4bn recovery fund will be necessary but may not be sufficient to support and stimulate job-rich rebound

New unemployment figures for October, that draw on as yet unreleased data from the Labour force survey for the third quarter, highlight a severe impact on the Irish jobs market stemming from the recent increase in health related restrictions on economic activity.

In circumstances where many recent indicators point towards smaller than feared impacts on spending and output, these data provide a counterpoint by highlighting the upper boundary of downside risks to the Irish economy from the pandemic. Moreover, the emerging divergence in indicators of income and employment highlights the uneven and potentially corrosive nature of pandemic effects.

The official unemployment rate significantly understates the current weakness of the jobs market as internationally agreed statistical definitions require that someone must be actively seeking work to be classified as officially unemployed. However, even on this basis, numbers unemployed have  climbed faster through 2020 than at any time since the economy went into a tailspin in 2009 while the headline unemployment rate at 7.3% in October 2020 is the highest in three and a half years.

More significantly, as the diagram below shows, the Covid-adjusted unemployment rate that includes those receiving the Government’s Pandemic Unemployment Payment climbed from a revised 15.9% in September to 20.2% in October.

Admittedly, this is substantially less than the April peak of 30.4%. Moreover, the CSO indicates that some 8.1% of PUP claimants are in full-time education (including 25% of those  aged under 25). So, the true underlying measure of unemployment is probably in the region of  18% rather than 20%. Finally, at least for now, these underlying figures represent layoffs rather than permanent job losses. 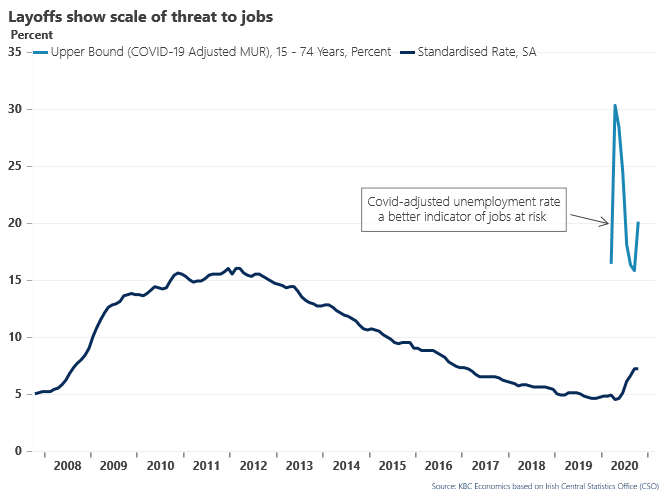 However, the scale of these numbers and the likely reduced viability of significant numbers of jobs in the absence of a sharp and sustained rebound in domestic activity into and through 2021 underlines the case for aggressive fiscal support followed by stimulus measures to limit the risk of permanently elevated unemployment. Budget 2021 spending plans incorporated an unallocated €3.4bn recovery fund that can go some way towards meeting this requirement.