Irish residential property prices were 14.8% higher in January 2022 than a year earlier. This represents the fastest pace of growth in almost seven years  (April 2015 +15.4%). It also marks the seventeenth month that the annual rate of house price inflation has been stronger than the previous month.

The January increase brings Irish house prices back within 3.3% of their 2007 'Celtic Tiger' peak, meaning that the previous peak will probably be overtaken in these official data in the next few months. In turn, given the lags in these data, the CSO numbers suggest that property transactions happening now in the Spring 2022 home-buying season are probably occurring at new record prices. So, in a variety of ways, the January figures underline the degree of price pressures in the Irish housing market at present.

We continue to expect a very bumpy path to a slower and more sustainable pace of increase in Irish house prices. The market is currently dominated by buoyant home-buyer demand. In the near term, this is underpinned by a strong jobs market and the prospect of faster wage growth in 2022 as well as a rebuilding of  household deposits in December 2021 and January 2022.

However, increased global uncertainty and the likelihood of rising ECB interest rates later this year as well as the expectation of improved new housing supply may introduce some increased caution into the market.  For  these reasons, we may be close to peak pressures at the moment but we may not be at peak prices.

There are tentative signs that the intensity of price pressures may be easing somewhat of late. As the diagram below illustrates, January has seen a further easing in the three month annualised rate of increase to 13.4%- a barometer of the recent short-term trend. This is the first time this shorter term trend has been below the year on year increase since May 2020.

In an effort to correct for the distorting influence of the pandemic on the Irish property market,  the diagram below also includes the two year annualised pace of growth (in red). The January increase on this measure of longer-term underlying momentum is 8.5%, a somewhat higher pace than that seen through 2021 but returning to the sort of rate of increase seen in 2018 and early 2019 before Covid-19 and Brexit concerns weighed on the Irish economy and, consequently, on the property market.

In the same vein, the diagram also suggests a slight moderation in the pace of increase in the level of property sales in recent months. On-market property purchases by household buyers were up just 0.9% year-on-year in January. While the 4.2% y/y increase in the three month moving average is a fairer representation of current conditions, it is still well below the frenetic pace seen through most of 2021. 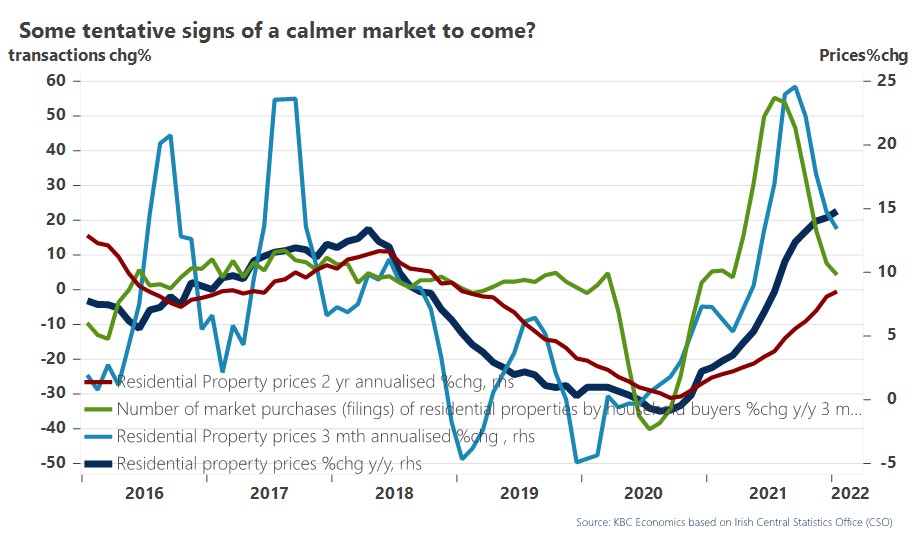 As has been the case since early 2015, property price increases continued to rise faster outside Dublin (+16% y/y)  than in the capital (+ 13.3%y/y), with the January increase in prices outside Dublin marking the fastest pace in the history of the CSO series that stretches back to 2006.

As the diagram below clearly illustrates,it remains the case that Irish property price inflation is strongest in those areas where properties are cheaper reflecting the influence of affordability constraints and increased working from home. However, with the ‘Return To Office’ regaining momentum as health-relate restrictions fade, the relatively rapid pace of growth in property prices in more rural areas may ease back as 2022 progresses 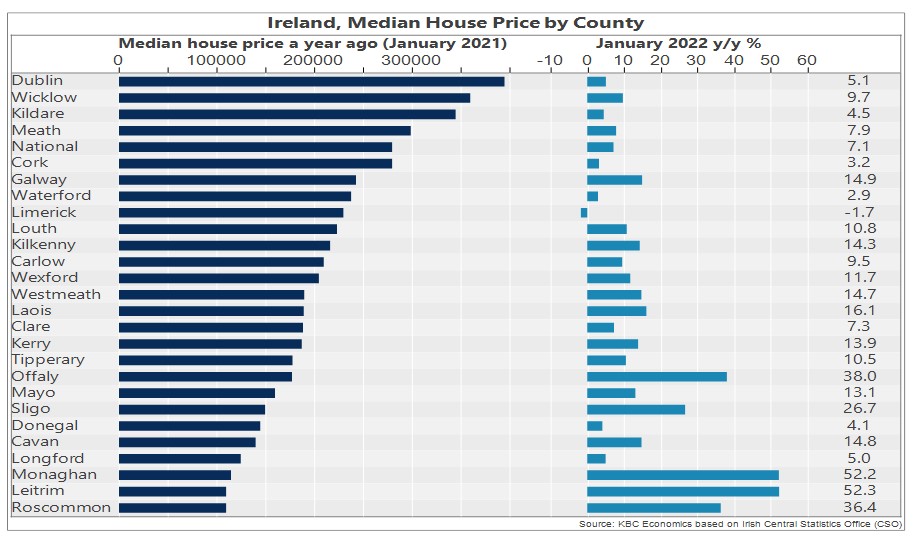 While we don’t envisage any dramatic shift in the current imbalance between demand and supply, and, in the near term, property price inflation could edge even higher, we expect some gradual easing in Irish property price inflation to become evident later in 2022 reflecting both a moderation in the pace of demand growth and some modest improvement in new supply.

With supply adjustments relatively limited, the main driver of the property price inflation dynamic in 2022, as has been the case in recent years, may be any change to the current strong momentum in demand growth.

Contrasting influences on home-buyer demand in 2022

On the demand side, a more uncertain geopolitical outlook globally may cause some to postpone making major financial commitments but the same risk factors are also increasing new construction costs and, as such may not prove to be a notable constraint on Irish house prices in the year ahead.

A more significant influence could be the growing prospect of a rise in borrowing costs with the ECB likely to raise its policy rates later this year for the first time since 2011. Although the scale of ECB tightening may be reasonably modest and well signalled, the threat of higher interest rates allied to a marked increase in living costs will weigh on affordability.

Faced against these emerging ‘headwinds’ to the Irish residential property market in 2022 is a robust trend in in employment and earnings growth in the Irish economy that strengthened notably through the course of 2021 and appears consistent with the pick-up in house price inflation over the past year and a half.

As the diagram below illustrates, the increase in ‘compensation of employees’, the National Accounts aggregate that measures the economy-wide wage bill (including employers social contributions) increased 8.1% in 2021, the fastest increase since 2007 and broadly in line with the 8.3% average increase in house prices last year.  While wage growth varied across the economy, the main driver of the pick-up in compensation of employees was buoyant employment growth.

In broad terms, the elevated increases we have seen in Irish property prices through the past year seems to be consistent with a very strong jobs market. That influence looks set to remain solidly supportive through the coming year and may be accompanied by a faster pace in economy-wide wage growth prompted by the strength of the jobs market and higher consumer price inflation. 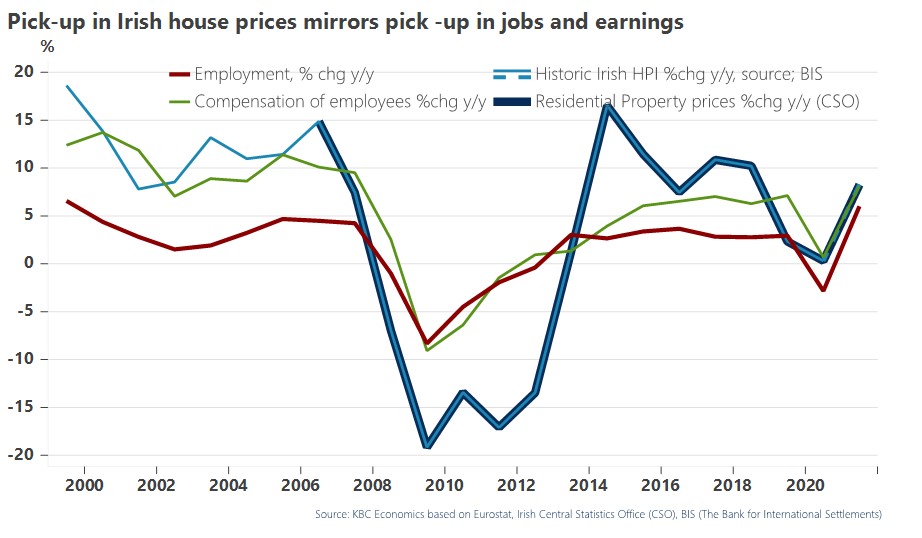