Negative if largely statistical surprises in the latest Irish growth data chime with increasing downside risks to the economic outlook here and elsewhere from the Russian invasion of Ukraine.

In spite of the weaker momentum in the national accounts data for the 4th quarter of 2021, a still robust starting point in terms of output and employment, coupled with the limited direct economic links between Ireland and Russia, means that Irish economic growth should remain robust if markedly more modest in 2022. However, the likelihood is that wider economic and financial fallout from the awful events in Ukraine will translate into a challenging year for many households and businesses. 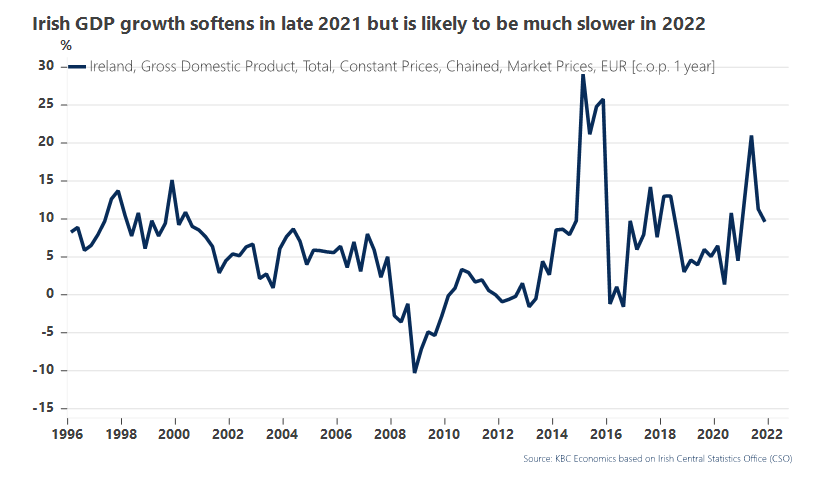 Both the surprisingly weak quarterly change in the Q4 data and the emerging global outlook suggest that Irish GDP growth in 2022 will be altogether different from the 13.5% figure recorded in 2021. We previously envisaged GDP growth would be in the region of 7% this year but we tentatively suggest GDP growth of around 5% now looks likely in 2022. This is part a statistical adjustment but we also need to take account of a notably less favourable global backdrop.

The direct economic activity links between Ireland and Russia are minimal-Russia accounted for slightly under one per cent of Irish exports and less than a half per cent of Irish imports but spill-over effects through notably larger impacts on other European countries could be significant as is the emerging surge in energy costs and possible risks around continuity of supply. In the absence of a further marked worsening in these adverse influences, the current positive underlying momentum in the Irish economy would suggest these risks may be material but manageable.

Some sense of the scale of energy-related economic difficulties is suggested by the rough doubling of the cost of Irish energy imports in 2021. A broadly similar increase might be envisaged in 2022 that would imply a hit of around €3bn to the Irish economy. Mechanically this would shave about 2-3 percentage points off consumer spending power and implies a significant squeeze on business profits. Beyond these direct impacts, the broader hit to business and consumer confidence will weigh on spending plans. However, the resilience of the multinational sector and the adaptability of domestic businesses seen through the pandemic suggests Irish economic growth will slow rather than stop in 2022.

Irish economic growth data for  the final quarter of 2021 show an unexpected and sharp 5.4% quarterly drop in GDP (although the annual rate of increase merely slowed to 9.6% y/y from 11.3% in Q3). The quarterly fall represents a markedly weaker performance than was seen at any stage in the pandemic and the largest quarter-on quarter decline on record (the series goes back to 1995). This result sits awkwardly with other evidence showing an Irish economy with robust employment growth and improving tax revenues. As a result, we would see the headline quarterly GDP outturn for Q4 primarily as statistical noise rather than a source of major concern.

Although the output side of the accounts show that this was largely driven by an unusual and likely temporary weakness in multinational sector output, the expenditure side of the accounts reveal a somewhat surprising surge in imports. Much of this is accounted for by a large and lumpy import of intellectual property assets (that would through an associated boost to investment also imply a neutral impact on measured GDP growth). However, there also appears to be a material step-up in imports that looks at odds with  developments elsewhere in the data. Logic would suggest that the Q4 number is something of an aberration that  should reverse in coming quarters. The unexpected import of Intellectual property also testifies to an encouraging further ‘onshoring’ to Ireland of multinational activities that should bolster output further in coming quarters.

The Q4 data also show a disappointing if modest 0.3% fall in consumer spending from three months earlier that means household spending was essentially flat in the second half of the year in spite of strong job gains, a much greater sense of ‘living with Covid’ and materially increased savings. As a result although Irish GDP is some 15% above the pre-pandemic level of Q4 2019, household spending at the end of 2021 was still some 1% lower. 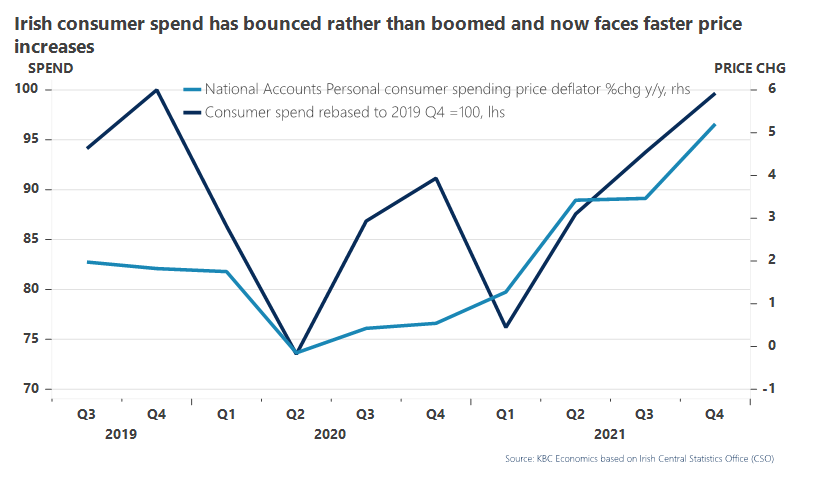 So, there has been a bounce but not a boom in consumer spending.  Apart from some health-related restrictions on spending in late 2021, one major headwind to more buoyant consumption has been a marked pick-up in consumer prices. With inflation likely to threaten 6% in 2022,  household spending may increase more modestly this year again than widely envisaged.

It should be noted that the price deflator used for consumer spending in the National accounts is slightly different than the conventional consumer price index but it showed quarterly increases of 1.8% and 1.6% in Q3 and Q4 respectively. For 2021 as a whole the National accounts measure of the increase in in prices paid by consumers rose  3.4%, with the Q4 figure up 5.2% on a year earlier and  draining a significant amount of spending power from Irish consumers. This is likely to be an even more negative influence through 2022.

A further concerning element in the national accounts was the 1.3% drop in construction of new dwellings in 2021. While this largely the health-related restrictions on construction in the early months and a significant improvement was seen through the year, these data suggest we are unlikely to see a surge in supply sufficient to markedly soften house price growth in 2022.