Irish consumers still sensitive to any indications of threats to recovery

Consumers still cautious but a little more willing to spend

… but jobs and population growth mean more people will be spending

Irish consumer sentiment edged lower for the second month in a row in November as a result of a slight downgrade of Irish economic prospects. While consumers still view prospects positively, they remain very sensitive to any potential threats to the Irish economic recovery. We think developments such as a rail strike during the survey period and uncertainty over a proposed Apple data centre may have affected thinking as to the strength and durability of the recovery as well as the outcomes it is now delivering.

It should be noted that current levels of the survey remain consistent with a broadly positive outlook on the part of Irish consumers and, as diagram 1 below indicates, this is also translating into solid growth in retail sales. However, the key drivers of higher spending are increases in the population and the number of people at work. So, market growth for consumer-focussed businesses is primarily the result of more people spending rather than the average person spending notably more.

Softer survey readings of late suggest that ongoing economic uncertainties and persistent financial pressures may mean that caution is a more important influence than confidence on spending for the typical Irish consumer.  While this may constrain the pace of increase in consumer spending over the Christmas period, strong gains in employment and faster income growth than inflation imply a healthy increase on last year’s outturn appears likely. 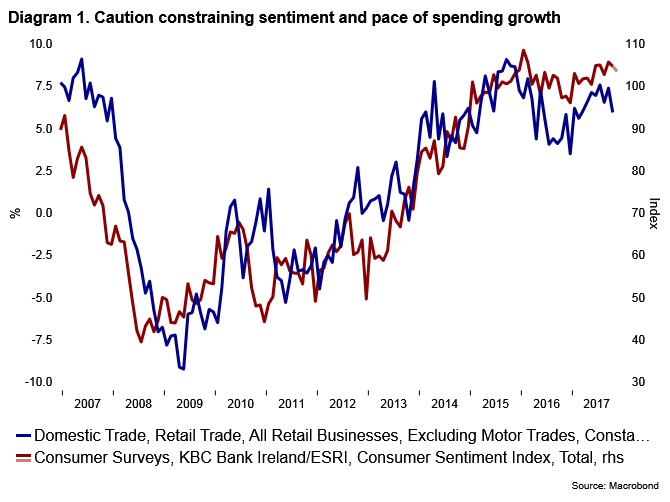 The KBC Bank/ESRI consumer sentiment index slipped to 103.6 in November from 104.8 in October, continuing a modest decline from September’s eighteen month high of 105.8. We don’t interpret this as evidence of any marked change in the mood of Irish consumers. The sense that the broader trend in sentiment remains positive is suggested by ongoing gains in ‘smoothed’ measures such as the three, six and twelve month moving averages of the survey data.

The easing in Irish consumer sentiment data in November coincided with somewhat larger declines in similar confidence indicators for the US and UK in November.  In the case of the US, uncertainty regarding tax reform and higher US debt may have prompted some pull-back from multi-year highs while in the UK weaker growth and squeezed living standards saw confidence retreat to its lowest point in four months to match low-points seen immediately after the Brexit referendum. In contrast, euro area consumer confidence, boosted by the notably improved mood of French consumers, climbed to its highest level since August 2000.

The relatively limited movement in Irish consumer sentiment in recent months suggest no dramatic changes of late in the way the typical Irish consumer sees their own financial circumstances or their broader economic environment. However, the details of the November survey suggest they have become a little more cautious about the outlook for the Irish economy and job prospects.

During the November survey period, there were no major surprises in economic data or significant shifts in economic forecasts. The European Commission predicted the continuation of strong growth and although it did highlight the risks posed by Brexit and potential changes to the international tax environment, these concerns are not new.

We think the limited downgrade to the Irish economic outlook in the November survey hints at the continuing sensitivity of Irish consumers to risks to the ‘macro’ outlook, a sensitivity that understandably reflects the traumatic experience of the Irish economy during the past decade. Our suspicion is that the November survey results may be linked to the impact of a national rail strike on two days during the survey period.

In addition to the direct economic impact of the rail dispute, the sense of ongoing problems in industrial relations could also have weighed on thinking in regard to the outlook for employment. It is possible that uncertainty in relation to Apple’s planned data centre in Galway also contributed to a slightly weaker but still clearly positive assessment of the economic outlook by Irish consumers.

In contrast to ‘macro’ elements of the survey, the parts related to household finances were more positive, if only marginally so, in November.  A slight improvement in views on how household finances had developed in the past twelve months more than offset a smaller decline in expectations for the coming year.

An increase in spending plans tends to confirm consumers are not unduly concerned even if they are still careful about their financial circumstances. However, this may also reflect an increased tendency to plan and concentrate spending towards times of significant price-discounting such as the ‘black Friday’ period.

In broad terms, the November sentiment survey results suggest that Irish consumers are cautiously positive but they remain very sensitive to risks to the economy and their own finances. As such, there is little evidence of any widespread ‘feel-good’ factor that might suggest the prospect of a broadly based spending boom over the Christmas period.

However, even if the average consumer is unlikely to spend a great deal more, the fact that income growth is outpacing inflation will support higher spending. Of greater importance, population and jobs growth mean there are significantly more people spending than twelve months ago. As a result, Irish consumer spending should see a solid increase through the latter stages of 2017 and into next year.