• Rise in confidence only a limited reversal of weakening in May.

• Consumers in Ireland and elsewhere having difficulty judging economic conditions.

• Surprising breakdown sees concerns about economy and jobs but some improvement in household finances.

Irish consumer sentiment improved modestly in June but the improvement only retraced a small portion of the deterioration reported in May. The limited recovery in the June reading suggests that the earlier deterioration was not just a statistical ‘blip’. Instead, it seems to reflect some re-assessment of the current health of the Irish economy and their household finances.

That said, the fact that the June data show some pick-up is encouraging in that it hints that sentiment has not moved on to a clearly negative trend. Our sense is that consumers feel that a recovery may be taking hold but this is not translating into their circumstances. Their personal experience is still largely one of constraints on their spending power.

The KBC Bank/ESRI Consumer Sentiment Index rose to 81.1 in June from 79.4 in May. The 1.7 point gain in the index has to be seen in the context of a 7.8 point slide in the previous month. So, the recovery in sentiment in June has to be regarded as very limited.

We think it may take another month or two’s data to determine whether the recent setback to sentiment is temporary or fundamental. For now, we think it might be a correction of circumstances in which the rise in confidence seemed to run ahead of the conditions facing the typical Irish consumer.

These contrasting findings seem to reflect different economic dynamics at present. In the UK, most economic news has been very positive of late and consumers are also likely responding to an improvement in their purchasing power brought about by falling inflation and a perceived rise in wealth courtesy of soaring house prices (it should be noted that responses were taken before England’s exit from the World Cup).

In the US, consumers may be trying to make sense of conflicting economic signals. A recovery has been underway for some time and has translated into stronger share prices and property values as well as supporting job gains. However, wage growth has been disappointing and longstanding weakness in incomes as well as increased uncertainty over long term prospects has weighed on the mood of consumers and resulted in very choppy confidence readings.

Consumers in the Euro area have been repeatedly disappointed by a still fragile recovery and may be affected by very different concerns depending on their nationality. For Germans, poor returns on savings and worries about the direction European policy might be taking are quite different to the problems troubling French or  Italian citizens never mind those of the more ‘troubled’ economies. However, there is a commonality in the degree of uncertainty and in a sense that they may not benefit much from the current trajectory of their economies.

Our sense is that for some time Irish consumer sentiment readings have reflected hugely increased uncertainty in the wake of the traumatic experiences of the past couple of years. Equally important has been something of a disconnect for many between news of an improving Irish economy and their own experience. For significant numbers of consumers, the upturn they read and hear about is very much at odds with their own circumstances. Their sense that recovery is real and will eventually be reflected  in their financial situation seems to have taken quite a knock of late.

Unfortunately, a ‘remote’ recovery makes the sentiment index vulnerable to occasional ‘lurches’ such as that seen in May when campaigns for the European and local elections seem to have prompted a notably gloomier assessment of the outlook both for the economy as a whole and for consumers’ own finances. In this context, it will be interesting to see whether the spate of good economic news in early July has a notably positive impact on this month’s sentiment reading.

The details of the June survey hint at conflicting influences on consumer thinking last month. Three of the five elements of the index rose compared to May while the remaining two fell. Perhaps surprisingly, the three elements of the survey relating to personal finances improved while the two relating to the economy worsened. That said, a majority of consumers-albeit smaller than last month, think the economy and the jobs market will improve in the next twelve months while it also remains the case that a majority of consumers see their own financial situation on a deteriorating trend.

There were no dramatic economic developments during the survey period. So, the slight downgrading of views on the economy may be a carryover from the previous month. There were quite a number of new job announcements and a further fall in numbers on the live register that should have supported this part of the survey. Our sense is that any positive news was outweighed by the impact of the announcement of major difficulties at the Bausch & Lomb plant in Waterford. As we noted previously, any developments that heighten a sense of job insecurity are likely to have a particularly forceful impact on the mood of a still Small Rise In Sentiment Points To Still Fragile Irish Consumer7 July 2014 4 nervous Irish consumer.

In the light of more fearful thinking on the economy, it may seem surprising that sentiment in relation to household finances improved in June. As noted above, the balance of opinion still sees a weakening trend in household finances and it should also be emphasised that this month’s gains delivered only a very limited reversal of the sharp drop seen in these elements of the survey in May.

Our sense is that elements of the survey related to personal finances were boosted by two developments through the survey period. First of all, official data showed an improvement in property values and there appears to be a reasonable relationship between the general trend in residential property values and consumer sentiment as diagram 1 below suggests. 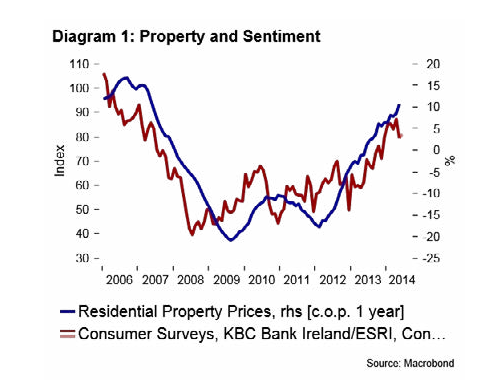 A second possible driver of positive sentiment was the policy easing announced by the ECB in early June. At the margin, the 0.10% drop in the ECB’s key policy rates would have helped some borrowers. Perhaps more important is the sense that interest rates should stay lower for longer – seen in market indications that official rates might not rise before mid-2016 at the earliest. Again, sentiment has historically been sensitive to interest rate developments. So, good news in this area might have been expected to boost the June reading.

Our judgement is that the June reading suggests that the setback to sentiment in May was not an aberration. Last month’s results emphasise the fragility of the current upturn from the consumer’s point of view. The intensity of the recent downturn has left many consumers financially and psychologically ‘scarred’. These after-effects are likely to be slow to fade. We still think sentiment and spending can improve through the second half of the year but recent sentiment readings and the fall reported in consumer spending in last week’s national accounts data for the first quarter show that this can’t be taken for granted.