Relative softness of prices in Dublin at odds with regional job trends.

The latest house price data suggest a gradual trend easing in house price inflation is continuing but the broad strength of the Irish economy as seen in indicators as diverse as buoyant retail sales and a solid natural increase in the population also released today mean the property market remains underpinned.

As has been the case since 2008, Irish residential property prices fell month on month in January. The 0.5% drop last month was the smallest January decline seen through this period. As the diagram below indicates, there tend to be clear seasonal traits in these house price data and, when we correct for this influence, we estimate the underlying trend in January 2016 is for a modest increase (+0.9%) rather than a decline. The slight pick-up in the annual rate of house price inflation from December (+6.6%) to January (+7.6%), the first material increase since last March, paints much the same picture. 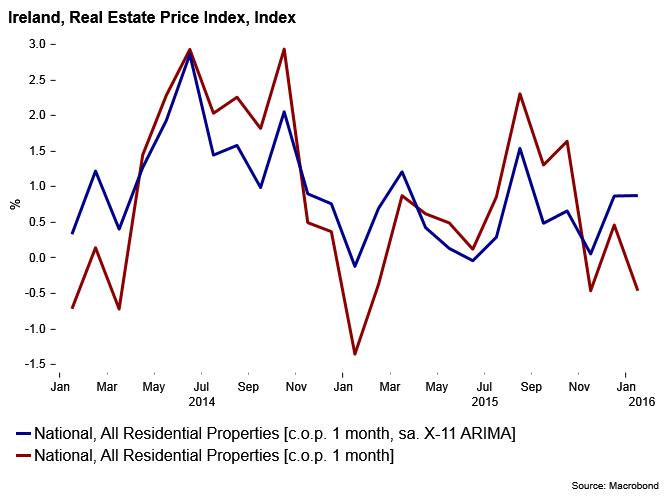 We still expect a gradual easing in the annual rate of house price inflation through the course of 2016 towards a 4 to 5% pace by year end but this could be a bumpy path as constraints on supply interact with credit ceilings and improving employment and incomes.
As has been the case for most of the past year, the trend in property prices has been stronger outside Dublin than in the capital. As last week’s data showed, annual jobs growth in Dublin (+3.9%) was notably faster in late 2015 than in the rest of Ireland (+1.6%), the trend property prices suggests some combination of constraints on both borrowing and supply rather than economic demand is driving the comparatively soft trend in Dublin prices.

Separately today, two other releases give some sense of diverse positive influences currently at work in the Irish economy. Retail sales data show a 4.1% monthly increase in January which translates into a 10.3% rise when compared to January 2015. While a surge in car sales is a key influence, a 0.7% monthly gain excluding cars (+6.4% year on year) testifies to the strength of the upswing in consumer spending at present.

Similarly, vital statistics (births and deaths) for the third quarter of 2015 also released today show a strong natural increase in the population of 8.9 per 1,000, up 0.1 on the third quarter of 2014, and altogether different from conditions through most of Europe where broadly similar numbers of births and deaths mean the EU average for the natural increase in population is just 0.3 per 1000 (2014 figure).