Underlying trend in sentiment still upward but modest and uneven

Irish consumer sentiment declined in April to its lowest level since December, continuing the see-saw pattern of improving confidence in one month being followed by a weakening the next month.

The fall in Irish sentiment last month mirrors declines in similar measures of consumer well-being in the US and UK although sentiment improved modestly in the Euro area. This suggests some element of the slippage reflects common ‘Anglo-Saxon’ concerns that might range from worries about the potential threat of a trade war (on top of Brexit) to the more immediate strains on household finances prompted by rising energy costs and restrained wage growth.

The most comparable indicator for the US, the consumer sentiment index prepared by the University of Michigan dipped to its lowest level since January. Although its compilers emphasised that current readings remain consistent with solid gains in US consumer spending, they did indicate that concerns about a threatened trade or tariff war had influenced some of the more negative responses.

UK consumer sentiment also slipped in April as a weaker trajectory for the UK economy allied to on-going political uncertainty worsened the outlook for household finances and produced an overall negative summary for the 28th consecutive month. In contrast, a slight pull-back in views on economic prospect by Euro area consumers was more than offset by expectations of healthier household finances resulting in a clear if modest increase in confidence.

One and a half steps forward, one step back

We remain of the view that there is an underlying trend improvement in in Irish consumer confidence and it should be emphasised that positive answers significantly outweigh negative answers to all the survey’s key questions. However, the April results highlight how uneven that progress of the Irish economic recovery has been for consumers.

The pathway taken by the survey in recent years has been one and a half steps forward followed by one step back. In this way, the April sentiment reading again emphasises that the Irish economic upswing is still not delivering a broadly based ‘feel-good factor’ to boost the mood of the average Irish consumer.

The KBC Bank/ESRI consumer sentiment index dropped to 104 in April from 108.1 in March. This decline brought the sentiment index back to its lowest level since December (103.2). The 4.1 point monthly drop is only slightly larger than the average monthly change during the past five years (3.4 points). So, we don’t think it signals a sea-change in thinking. Instead, it highlights the difficulties Irish consumers have in trying to interpret confusing signals in an uncertain and rapidly changing economic environment and decide what significance these have to them.

Layoffs and lack of income growth weighing on consumers

Four of the five components of the sentiment index were weaker than in March with the remaining element-consumers’ expectations for the Irish economy- remaining unchanged.   The contrast between stable views on the economic outlook and a pullback in other areas of the Irish consumer sentiment shouldn’t be over-interpreted but it may owe something to a continuing sequence of upbeat commentaries on Irish economic prospects in spite of emerging global concerns.

In light of the experience of the past ten years, it could also be that Irish consumers may be quicker to link any emerging threats to metrics more relevant to them such as employment and household finances. The weakest element of the April survey was the employment component. While it should be noted that the survey period saw quite a number of new job announcements, there was also news of significant layoffs at a couple of high profile Irish companies that may have focussed attention on risks to job security.

We also think that many Irish consumers continue to assess the health of the Irish jobs market through the prism of the growth in income it delivers to them. The consumer sentiment index has recovered strongly since its low point in 2009 reflecting the remarkable turnaround in the Irish economy. However, that turnaround has yet to translate to a marked improvement in average earnings growth as diagram 1 below (which compares the trend in sentiment to the inflation adjusted change in compensation per fulltime equivalent employee) shows.

Although employment prospects have improved in recent years and inflation has remained relatively low, many consumers have yet to sense a notably stronger trajectory in their spending power.  Persistently low inflation has not compensated for this. It might be suggested that weakness in the household finances area of the sentiment index might partly reflect an issue of ‘money illusion’ as April consumer price data show Irish inflation slipping back into negative territory (to-0.1% on the EU harmonised basis and to -0.4% on the domestic measure).

It could be the case that consumers are not fully factoring these price developments when taking into account how their financial circumstances are changing or it could simply be that the basket of goods and services they focus on is more heavily weighted towards areas such as housing costs (rents +7%) or heat and lighting (+5.4%) costs where prices are rising more rapidly. For some consumers, the absence of inflation is also sustaining what in many instances is a substantial ‘real’ debt burden. Whatever the reason, the widespread sense of a limited improvement at best in household finances could represent a significant constraining factor on the sentiment index. 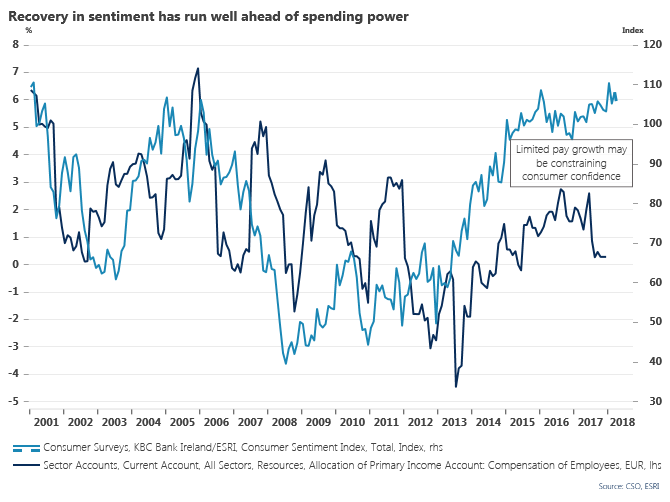 We also note that the pull-back in consumers’ views on their personal finances in April was particularly notable in regard to their current spending plans and their assessment of how their household finances had evolved in the past twelve months. It could be the case that some part of the decline in relation to thinking on household finances could reflect a reaction to higher spending associated with Easter or perhaps even costs such as higher heating bills associated with the severe weather in March.

Consumers’ expectations for their household finances over the next twelve months were broadly unchanged in April, with 27% expecting an improvement and 10% envisaging a deterioration. This balance suggests the majority of consumers don’t see any marked change in their circumstances notwithstanding a marked improvement in aggregate household net worth largely prompted by rising house prices. As we noted in our commentary on March house prices, there is little sense that rising house prices are leading to any notable ‘wealth effect’ boosting sentiment or spending. However, rising employment and reasonably subdued inflation should see Irish consumer spending increase by about 3% in real terms in 2018.