So, no additional leeway for Budget 2019 'giveaways'

Pace of further fiscal improvement likely to be modest

With three quarters of 2018 gone, exchequer returns for end-September appear broadly consistent with the official full year target of a General Government deficit of some €780 million or 0.2% of GDP.  Indeed, the balance of spending and taxes to this point is probably in line with a slightly better than forecast outcome with spending running slightly below profile and revenues fractionally ahead of target because higher than expected non-tax revenues have more than offset a small shortfall in tax receipts.

However, today’s numbers also hint at increasing strains ahead of next week’s Budget reflecting a  softer trend in tax revenues of late coupled with a modest acceleration in public spending. Importantly, there is nothing in the September returns that suggest any increased room for manoeuvre in next week's budget 2019. If anything the details in relation to emerging trends might signal slightly less leeway than previously envisaged.

These deviations are relatively modest and likely owe something to timing issues but with pressure to increase spending in areas such as health and housing and taxes slightly disappointing, they are indicative of the difficulties to make material further progress in the public finances at this stage of the economic and political cycles.

As diagram 1 below illustrates, there has been a clear pick-up in spending growth since March (although the extent of this acceleration partly reflects timing factors). Moreover, within this aggregate a €302 million over-shoot on current health spending is being compensated for by a €253 million shortfall in overall capital spending. This trajectory looks unsustainable.

While the headline increase in tax receipts has remained reasonably solid, this owes much to better than expected Corporation taxes. In general, taxes do not seem to be gaining as much momentum as might have been expected given the upswing in domestic activity through 2018. To an  extent, this is centred on particularly poor excise receipts.More generally, however, our best guess is that this disappointment owes much to strong disinflationary pressures bearing down on retail prices and wages but we see a Brexit-related caution acting as a further restraint into 2019. 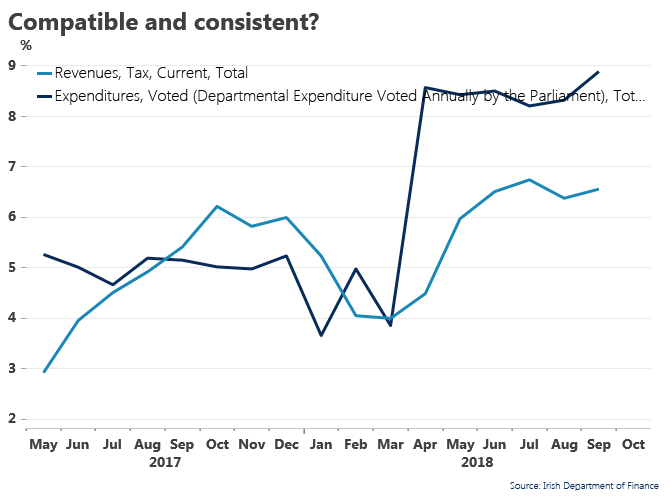 At this point, there is still scope for a surprise in either direction in terms of full year figures with 30% of tax revenues and 27% of public spending expected in the final quarter. However, today’s data point toward a solid rather than spectacular outturn for 2018 and no scope for additional largesse in Budget 2019.