Of those expecting lasting impacts, 46% expect it will be negative while 32% think the pandemic will lead to improvements for them

So, survey suggests some will suffer ‘scarring’ effects but others may enjoy lasting Covid ‘surplus’ in terms of income/wealth gains or improved quality of life

Irish consumer sentiment held broadly steady in September as a focus on potential threats to the economic outlook ranging from global taxation changes to elevated public debt contrasted with evidence of further progress out of the pandemic.

In circumstances where global consumer confidence has come under pressure in recent months, the latest comparatively positive Irish sentiment readings seem to reflect the influence of both the resilience of the Irish economy and the longstanding caution of Irish consumers.

The KBC Bank Ireland consumer sentiment index stood at 86.4 for September, effectively unchanged from the August reading of 86.5 and broadly in line with the two year high for the index of the index of 87.2 recorded in June. The September reading might be seen as continuing a period of consolidation in the thinking of Irish consumers as they attempt to assess the wide range of possibilities and problems that a post-pandemic economy might present.

The recent stability in Irish consumer sentiment has to be seen in the context of varying trends in similar metrics elsewhere. September saw US consumer sentiment stabilise after a sharp-decline to a decade long low in August while Euro area consumers were slightly less concerned -possibly as severe weather difficulties receded  and their UK counterparts grew altogether more gloomy.

As we noted previously, the slide in US consumer confidence in August reflected concerns that growth in the ‘States may have already peaked and income supports were cut. In terms of the scale of pandemic health and economic effects, the size of the fiscal response and the speed of the recovery, the US has been on a somewhat different trajectory to countries on this side of the Atlantic.

The diagram below compares the trend in Irish consumer sentiment since the beginning of 2020 with consumer confidence indicators for the Euro area and the UK. This suggests Irish consumers downgraded their outlook sharply and speedily when Covid-19 first struck but have since gradually if unevenly adjusted their thinking to reflect less damaging health and economic outcomes than initially feared. 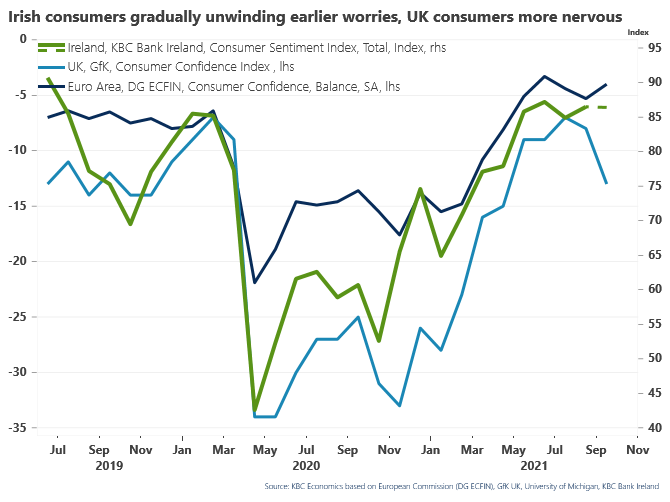 While Euro area consumer confidence tumbled to a nine year low in April 2020, the scale of deterioration was more muted than seen in Ireland or the UK. In the case of Ireland, we previously suggested Irish consumers’ concerns in relation to Covid were coloured by the scale and length of difficulties experienced after the financial crisis. A very different and supportive policy response and the relatively speedy if uneven economic improvement has fed a cautious improvement in Irish consumer confidence from the low-point seen when the pandemic first struck.

In contrast, it would seem that a large decline in activity and the perception of repeated policy mis-steps have weighed on UK consumer confidence through the past eighteen months. The fall in UK consumer confidence in September likely owes much to a surge in inflation but increased price pressures are a global phenomenon of late. So, it could also be suggested that the increased prospect of that initial steps might soon be taken towards both fiscal and monetary tightening in the UK has led consumers there to become more nervous in recent months.

The weakest elements of the KBC Bank Irish consumer sentiment survey for September were those related to the ‘macro’ environment - the strongest elements in the August reading. In part, this may be an understandable reflection of the degree of uncertainty about the future at present.

However, the September survey period saw a notably increased focus on the possible fallout for Ireland from global tax harmonisation as well as a number of domestic commentaries raising concerns around fiscal sustainability. These developments might be expected to weigh on Irish consumers’ assessment of the economic outlook.

Encouragingly, the September survey saw clear if modest improvements in all three elements of the consumer sentiment survey related to household finances. This suggests the prospect of sustained positive growth in consumer spending through the remainder of the year although we continue to characterise this as a recovery rather than a boom; notwithstanding strong growth of late, consumer spending in Q2 2021 was still 4.6% lower in real terms than two years earlier. Moreover, while retail sales data have been encouraging in recent months, the recent pace of increase in underlying (i.e excluding motor trades) retail sales at 3.6% y/y in August after 1.5% y/y in July seems indicative of healthy rather than ‘white hot’ growth in household spending.

A key feature of the pandemic has been the uneven nature of its impact. This is evident in the varying responses to the question above but a more concerning possibility is that the nature of impacts could be very different. 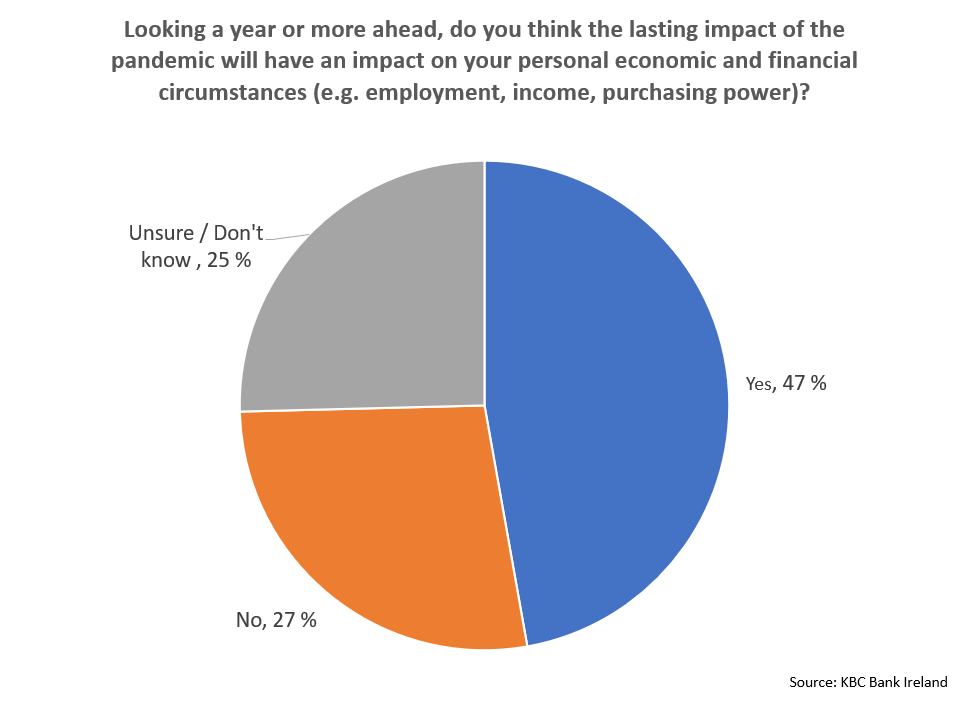 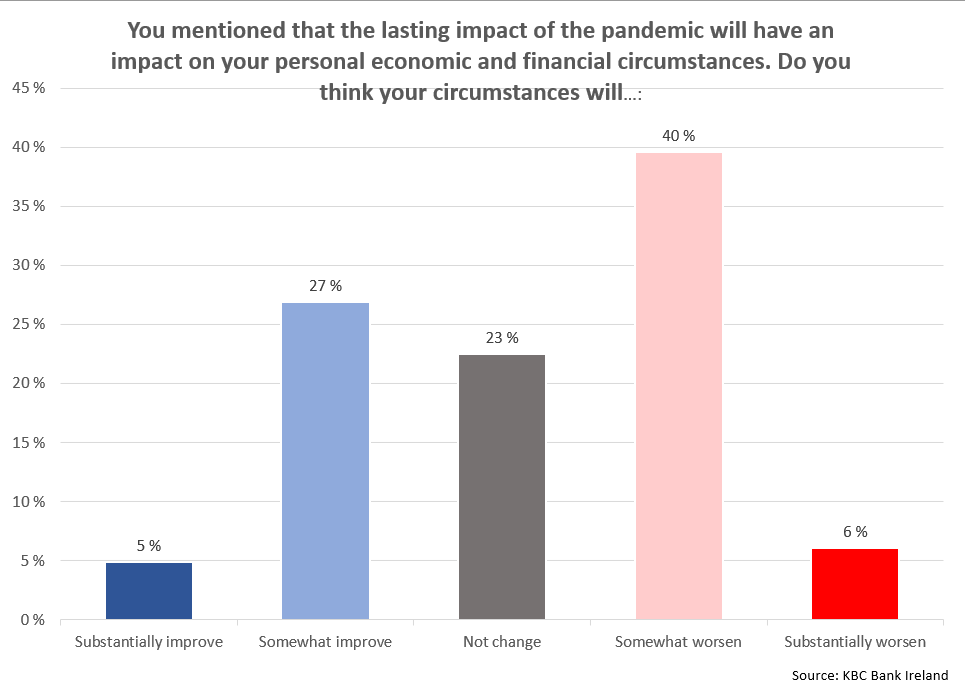 The September survey did not ask consumers to indicate why they felt the pandemic would have lasting positive or negative effects on them. It is likely that changes in income and employment prospects dominate but there may also perceived changes in lifestyle or work-life balance that are seen having lasting effects.

The most notable feature of these responses is the marked differences in consumer perceptions as to the lasting impact on them. While sample size argues against emphasising the specific numerical results, we can make these general points;

In one respect, these differences in responses echo the reality of a concentration of job losses during the pandemic on low paying sectors and the likely persistence of permanent ‘scarring’ of income and employment prospects in such areas. While the Irish economic tide may be rising now, there is a strong sense in these results that not all boats will be lifted.

The data also reveal  a less frequently discussed implication of the pandemic. A significant number of consumers think they will enjoy a lasting improvement in their circumstances in its wake. For some of these, it could be the result of increased demand for the goods and services they produce. For others, it may be that they have accumulated additional savings or improved their financial balances.

However, our sense is that for many others expectations of a lasting improvement in their circumstances may be due to the prospect of permanent changes in the structure of their working lives likely centred on the increased capacity to work from home. This would seem consistent with the earnings and education profiles of those giving positive responses.

It could be that comparatively the relatively favourable responses of Dublin consumers also reflected employment and earnings profiles less threatened by the pandemic but our sense is that time gains from avoiding traffic congestion and other benefits of working from home also informed this result.

The survey results show substantial numbers of younger respondents expressing a negative view of the expected lasting impact of the pandemic on their personal economic and financial circumstances. As for other age groups, this number exceeded those expecting positive impacts. However, a perhaps surprising finding is that a somewhat larger proportion of younger age groups were more likely to express a belief that the lasting impact of the pandemic would be positive for them personally than those in older age groups.

In attempting to explain this result, we would begin by emphasising the importance of not seeing those in young or old age cohorts (or defined by other characteristics) as members of distinct and completely homogenous groups whose circumstances are defined solely by a single classification such as their birth date..

Beyond this key caveat, it might be suggested that these responses may reflect difficulties for some in making up income losses experienced during the pandemic in a relatively short time-frame and/or in sectors where the pandemic may cast a shadow over activity for some time to come. It might also be suggested that the results could be consistent with a greater capacity sense of flexibility or mobility on the part of younger age cohorts to allow them transition to areas offering stronger post-pandemic prospects.

We would caution against over-interpreting the slightly surprising age-related responses to this special survey question. However, we think the broad findings serve to underscores the importance of appreciating how uneven the lasting impact of the pandemic may prove within as well as between groupings.

Responses to the special question in the sentiment survey seem to justify concerns that Covid-19 may  have long term ‘scarring effects on significant numbers. However, the survey also suggest some could enjoy a lasting Covid ‘surplus’ either in the form of increased income and/or wealth or in terms of an improved quality of life. For this reason, it seems likely that the pandemic will widen the disadvantage deficit within the Irish economy.

The expectation that, on balance, the pandemic will leave long term negative impacts is important both for the substance and signalling of policy settings and the need for ongoing if adapting policy support. That said, we also think that the significant numbers signalling expected positive long term impacts on their personal economic and financial points is a very encouraging signal of the resilience and adaptability of Irish consumers.