The remarkable and now well established improvement in the Irish economy was underlined further by jobs data for the third quarter of 2015 released today. Numbers at work were 56k or 2.9% higher than in the third quarter of 2014. As full-time employment climbed by 59k or 4.1%, the fastest pace since late 2006 and unemployment dropped to 8.9% in October, the lowest rate since December 2008, the details of today’s release paint an even stronger picture than the headline rise in employment.

For the first three quarters of 2015, Irish jobs growth averaged 2.7%, about a percentage point higher than through 2014 while full time employment is 3.9% higher than in 2014. This means we have to upgrade our forecast of average jobs growth of 2.5% for 2015 to 2.7%. We also now think unemployment could drop towards 8.5% by end-2015 and could also fall below 8% by the end of next year. Moreover, improvements on this scale tend to underpin expectations of out-sized growth in Irish GDP in 2015. We continue to see GDP growth in the region of 6.5% this year.

Some sense of the current momentum of the Irish economy is provided by a comparison with jobs growth elsewhere shown in diagram 1 below. The 2.9% rise in employment in Ireland is notably faster than in the US (+2.1%), the UK (+1.4%) of late or the trend evident in the Euro area in the first half of 2015 (+0.8%). 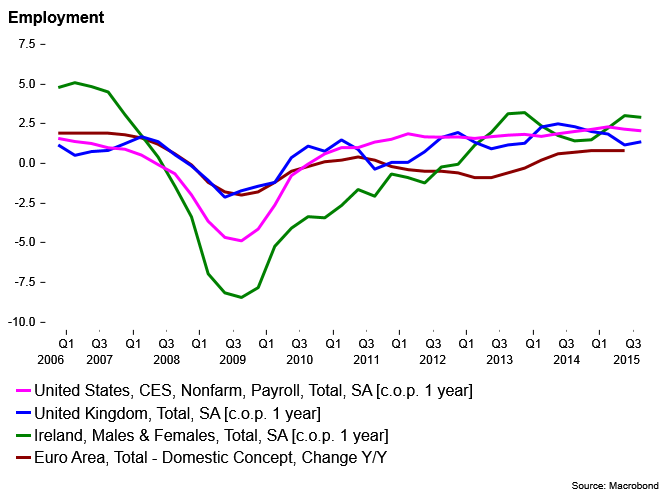 The current rapid pace of Irish jobs growth clearly owes much to what now looks to be an overshoot in terms of the scale of job losses through the downturn as well as the current buoyancy of activity. Following a drop in employment of 327k or 15.1% between the early 2008 peak and the mid-2012 trough, numbers at work have recovered by 140k in the past three years.

As diagram 2 suggests the sharp improvement in employment has not prompted any marked increase in the labour force of late. Annual jobs growth of 2.9% in the latest quarter was accompanied by labour force growth of just 0.6% over the same period. While this partly reflects demographic influences including net emigration, it is also somewhat surprising that the participation rate (measured on the right hand axis of diagram 2) has not recovered more of late. This hints at potentially significant changes in the nature of Irish labour market conditions that could have important implications for Irish growth prospects in the medium-term. 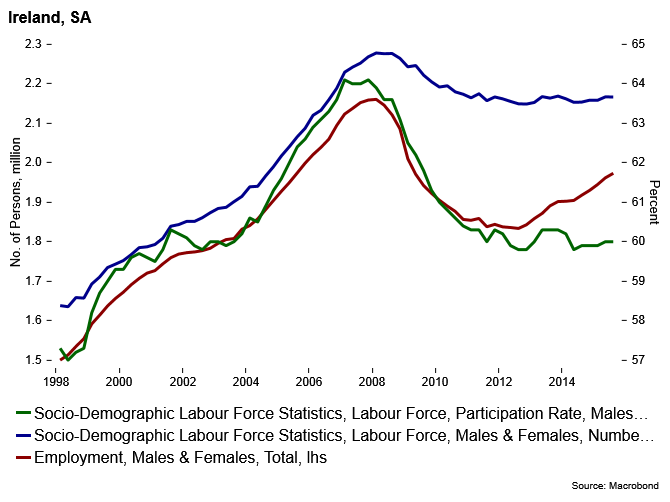 To the extent that strong economic growth persists in the Irish economy in coming years, the capacity to boost labour force growth will become increasingly important. In turn, this highlights the importance of ensuring policy interventions - whether these relate directly to the labour market itself or to related areas such as housing - do not act to significantly constrain growth in the next few years.

One slightly disappointing aspect of today’s data is a slight easing in the quarterly pace of jobs growth to (a still healthy) 11.6k from 17k previously. This largely reflects weakness in part time hiring in the third quarter. The sectoral breakdown of the quarterly change is somewhat surprising. With widespread indications of a strong tourism season, a clear pick-up in retail spending and encouraging trends in construction activity, it seems unusual that each of these areas would post marginal declines in employment in the most recent quarter. This could reflect sampling errors or it may be that the emerging step-up in activity has yet to be reflected in headcount. In that event, we should see stronger employment trends in these areas in coming quarters.