Numbers at work in the Irish economy showed an exceptionally strong increase in Q3, increasing by 4.8% or 113k from the 2nd quarter, marking the largest number of jobs created in a single quarter in the twenty four year history of the series. Employment in Ireland has now reached 2.466 million, some 99k above its pre-pandemic peak.

As the diagram below illustrates, the surge in jobs growth of late is largely a recovery from  the dislocation caused by Covid-19. In this regard, it echoes many other indicators ranging from activity surveys to tax receipts that point towards a marked step-up in domestic activity as the year progressed. (Coincidentally, the speed and scale of recovery in employment would be consistent with some pick-up in the demand for housing through this year).

Today’s data suggest a comparatively strong rebound in Ireland relative to the trend in many other economies and an increasingly notable recent outperformance. Indeed, the 4.2% q/q pace of jobs growth in Ireland in q3 dwarfed that in the US +(1.4%) or the Euro area and UK (both +0.7%).

Of course, the Irish jobs market has long registered a faster pace of jobs growth than many others. In part, this reflects the dynamism of this economy but it also much to demographics. Faster population growth implies a need for faster job creation to absorb additional  labour supply. Looking at the trend through the three years pre-pandemic. On this basis, the most recent surge in jobs growth puts employment back on its robust pre-pandemic trend (as suggested by the catch-up to the trend line in the latest quarter).

Importantly, the rebound in the Irish jobs market in the past year has been altogether faster than that seen in the wake of the financial crisis. As the diagram below highlights, the initial fallout in 2008 and 2009 was notably worsened by the impact of austerity measures at home and abroad and a marked deterioration in credit conditions. These ‘second round’ effects prompted a much larger longer and broader deterioration in the Irish jobs market. However, an altogether more enlightened policy stance when the pandemic struck meant that the hit to incomes and employment was offset rather than amplified. 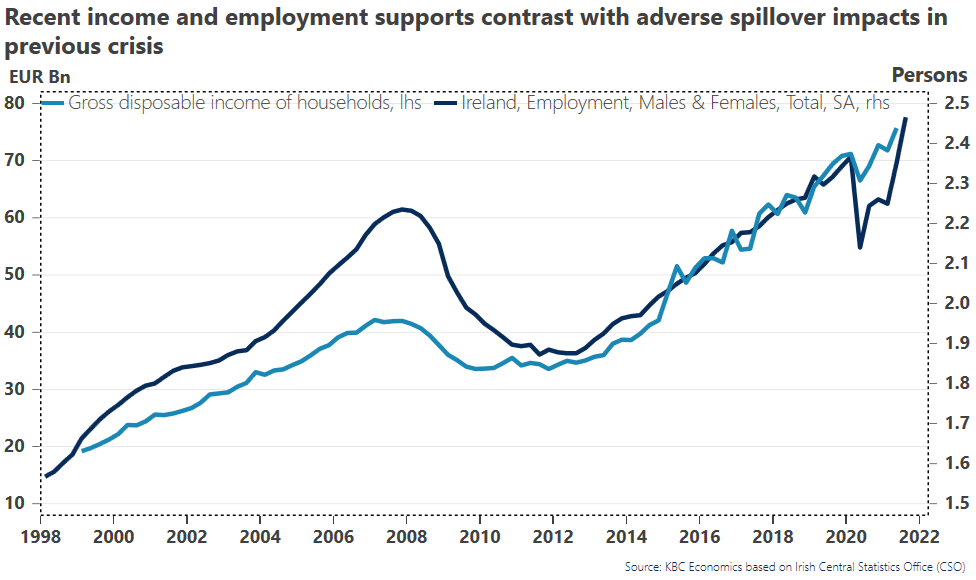 The clear lesson from the financial crisis is that ‘scarring’ of  income and opportunity prospects following economic downturns can have damaging and lasting impacts on the economic and social fabric. While the appropriate and effective stance of fiscal policy applied in the wake of the pandemic has done  an exceptional job, the details of today’s release suggest this task is not completed.

Some more focussed element of support may need to be sustained for some time to limit the risk of persistent damage in certain sectors of the economy. Indeed, even in the face of rapid growth in aggregate employment, numbers at work are still lower in 4 out of 14 economic sectors including hospitality, administrative and support services, construction and areas focussed on recreation and culture.

More generally, the details suggest some scope to increase labour inputs. According to the Central Statistics Office, while employment is up 148k or 6.4% over the two year period from  the pre-pandemic Q3 2019 to q3 2021, hours worked are flat over the same period. So, the headline figures likely disguise a significant element of underemployment or underutilised labour capacity at present. In the same vein, the diagram below shows that while the Covid-related decline in employment was primarily seen in part-time jobs, the recent turnaround has seen a disproportionate rebound in part-time employment. 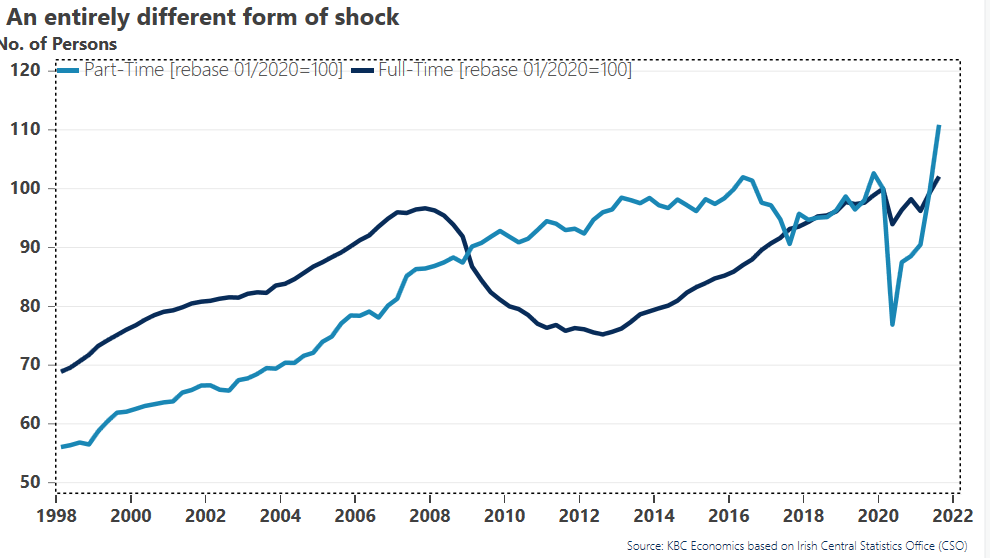 It is also the case that unemployment remains modestly higher than before the pandemic. While there was a marked reduction in joblessness in Q3 2021, reflecting the re-opening rebound that took the standard international measure of the unemployment rate to 5.5% from 7.1% in the previous three months, it remains somewhat above the 4.7% reading recorded at the start of 2020.

Again, this suggests some rationale for ongoing policy support, particularly in circumstances where many of those whose employment circumstances have been buffeted by the pandemic are under increased threat from the economic fallout of the latest surge in Covid cases. In this context, while the sharp drop in the Covid-adjusted unemployment rate from 27.1% in January 2021 to 7.9% in October 2021 underscores the improvement in economic conditions, its volatility and elevated peaks emphasise vulnerabilities to the virus.