Full year GDP growth likely to be about + 2.5% in 2020, an almost unique positive result among advanced economies

Irish GDP rebounded strongly in the third quarter. An 11.1% increase from a smaller than previously estimated cumulative 6.6% drop over the two previous quarters represents an exceptional outcome.

In GDP terms at least, these numbers suggest the Irish economy has recovered from the pandemic within a quarter whereas it is generally expected that most economies will not return to pre-Covid-19 levels for at least a couple of years. As the diagram below illustrates, Irish GDP was 3.7% higher in Q3 2020 than in Q4 2019 whereas US GDP was 3.5% lower, Euro area GDP was 4.4% lower and UK GDP was 9.7% lower. 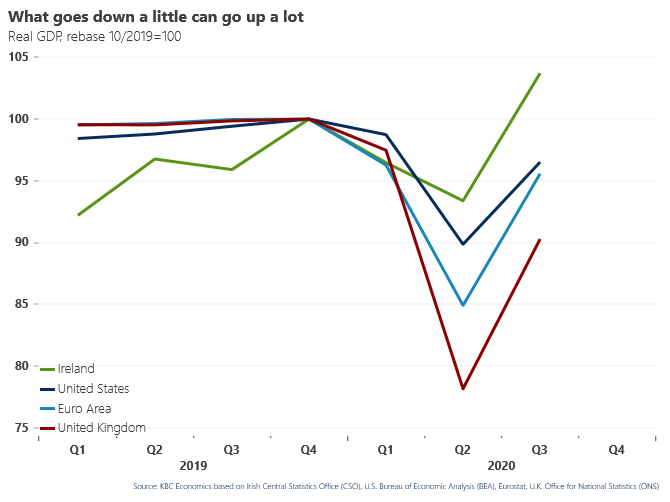 Today’s numbers suggest that, for 2020 as a whole, Irish GDP will be solidly positive. We have revised our estimate to an increase in the region of 2.5%. Such an outturn seems to point towards an Irish economy that is very different both in terms of structure and strength at present to that suggested by double digit GDP declines widely feared through the Spring and Summer.

We have consistently emphasised that GDP data do not reflect the circumstances faced by most households and businesses because of the exceptional nature of the multinational sector and the particular importance of Pharma and ICT, two sectors where demand has been underpinned rather than undermined by the pandemic.

While exports grew an impressive 5.7% q/q as the diagram below illustrates, the improvement in third quarter GDP is principally a reflection of a rebound in domestic demand as households and domestic facing firms responded to the re-opening of the economy from health related restrictions. In this context, Irish consumer spending increased 21.3% q/q  a notably sharper bounce than seen elsewhere (UK +18.3%, Germany +10.8%, US +9.9%). This reflects both the forced nature of pull-back in spending earlier in the year and fiscal income supports. That said, Irish consumer spend in Q3 remained 5.5% below its Q4 2019 level, a larger shortfall than in the US or Germany but notably better than its UK counterpart.

Similarly, Irish construction spending posted a striking 40.1% q/q increase but still remains 13.3% below its Q1 level. The risk that such shortfalls in domestic active become permanent ‘scars’ that weigh on employment prospects is the reason that through this year we have married relatively upbeat forecasts for GDP with calls for substantial fiscal support. 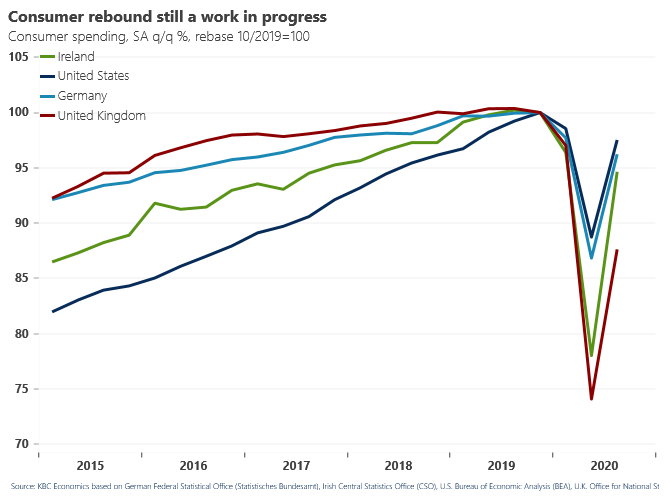 The likelihood is that the fourth quarter GDP data will show a markedly weaker trend. However, the improvement in broader global conditions (particularly the sustained recovery in China), the pandemic-proof nature of some multinational outputs and an increased capacity to produce and consume remotely suggest any softening should be notably less pronounced than that seen in the first half of the year.

For 2021, the dislocation caused by even a limited trade deal between the EU and UK will be a significant headwind to the outlook for many firms (and households). Against that, the prospect of a strengthening pharma boom has increased markedly and suggests that capacity issues in this sector could be the major constraint on the pace of export growth overall. Reflecting this, we have upgraded our GDP forecast for 2021 (that assumes a very limited Brexit trade deal) to 4%.  Moreover, in GDP terms at least, it may be that risks are skewed to the upside.

Significantly, the strength of GDP growth provides additional fiscal space, both directly and indirectly, to prevent significant scarring from the pandemic on the outlook for jobs and simultaneously address substantial structural impediments to longer term growth in the shape of shortfalls in economic and social infrastructure. The direct contribution of buoyant GDP comes from the associated tax revenues while the indirect element stems from the favourable impact of a larger  GDP denominator in international comparisons of deficit and debt ratios.

While this dividend may well be time limited, it creates at least the temporary space for public infrastructure spend to put the Irish economy on a stronger trajectory. Ensuring this opportunity is not wasted seems a much more important and urgent policy question than speculating when or if fiscal policy might eventually have to be tightened.