…but ECB economic outlook suggests it won’t be.

Although ECB president, Mario Draghi, faced a barrage of questions on Greece, the immediate response of financial markets to his press conference today suggested he said little of significance. We didn’t hear anything that would warrant dramatic movements in exchange rates or interest rates but Mr Draghi’s comments are worthy of attention in terms of what they say about the current focus of ECB policy and the strains it is facing.

Mr Draghi’s comments today were keenly awaited as an opportunity to hear the ECB’s assessment of the last gasp deal on Greece that is now being finalised. The past few days have seen a remarkable consistency in comments emerging from the IMF, from Mr Tsipras, the Greek Prime Minister and many other senior politicians in Athens, as well as from Mr Schauble, the German finance minister and many of his colleagues. These remarks suggest that there are shared and serious misgivings that the deal they are now agreeing can be successful.

Mr Draghi sounded a notably more optimistic note on Greece than we have heard from most of the other key actors in this on-going drama. He said he hesitated in commenting on the proposed programme but went on to note that it contains ‘an impressive list of reform measures’ and that ‘by and large’, it has features that ’promote growth, fairness and fiscal sustainability’.

The assessment underpinning these more encouraging views allowed Mr Draghi to announce today the ECB’S decision to increase Emergency Liquidity Assistance (ELA) funding to Greek commercial banks by €900million for one week. This is probably a more supportive outcome for Greece than many might have expected today. The amount may be sufficient to keep the ATMs working but it also means banks could struggle to provide anything approaching a full service if doors open on Monday. So, further progress towards a deal will be necessary to attract additional support and begin what may be a protracted process of normalising banking in Greece.

Importantly, for the ECB to consider even maintaining the existing level of ELA support to Greece, Mr Draghi had to sound relatively optimistic on Greece today. He emphasised how the extent of ECB support depends heavily on its assessment of the quality of the collateral provided by Greek commercial banks which is closely related to the health or otherwise of the Greek public finances. If his analysis had led him to share the views expressed by many on both sides of the negotiations that doubt the likely success of the recently framed deal, it seems clear that the ECB would have downgraded this collateral further and the amount of ELA would likely have been cut.

While repeated references have been made to the ‘rules-based’ nature of the ECB, Mr Draghi appears to be a master of finding critically important leeway in the interpretations of these rules. He noted today that assessments in these matters ‘are not simple or one dimensional’. It would seem Mr Draghi has been walking a fine line that balances requests to do more and demands to end the support provided through ELA. He spoke of acting ‘proportionately’ while ‘some’ -widely believed to be a small but influential number of ECB governing council members, wanted a reduction in ELA.

Markets not only trust Mr Draghi to find measures that avoid a meltdown in Greece. Critically, it is a strong sense that, under Mr Draghi, the ECB can and will act decisively to limit spill-over risks to the broader Euro area from a rapidly changing and potentially unprecedented situation that has ensured financial markets have remained reasonably composed in recent months in the face of markedly increased uncertainty about the future direction of Economic and Monetary Union. Today’s ECB statement provides further reassurance in this regard.

Mr Draghi indicated that ‘Recent developments in financial markets, which partly reflect greater uncertainty, have not changed the Governing councils assessment..’ in relation to the outlook for the Euro area recovery or inflation. So, there’s no need to panic but he also emphasised the willingness of the ECB to act to counter any adverse developments by including the following paragraph in today’s press statement;  ‘Looking ahead, we will continue to closely monitor the situation in financial markets, as well as the potential implications for the monetary policy stance and for the outlook for price stability. If any factors were to lead to an unwarranted tightening of monetary policy, or if the outlook for price stability were to materially change, the Governing Council would respond to such a situation by using all the instruments available within its mandate.’

To an extent, these phrases echo comments by US Federal Reserve chairman, Janet Yellen, in her mid-year testimony yesterday that noted ‘Foreign developments, in particular, pose some risks to U.S. growth. Most notably, although the recovery in the euro area appears to have gained a firmer footing, the situation in Greece remains difficult.’  However, the tone of Mr Draghi’s remarks suggests these considerations are altogether more central to ECB decision-making at present.

Repeated twists and turns in negotiations on Greece mean the ECB understandably feels it needs to regularly remind all that it stands at the ready in case of nasty developments. However, today’s references to financial markets and uncertainty sit at least a little awkwardly beside the strong signal from the previous press conference that ‘we should get used to periods of higher volatility. At very low levels of interest rates, asset prices tend to show higher volatility, and in terms of the impact that this might have on our monetary policy stance, the Governing Council was unanimous in its assessment that we should look through these developments and maintain a steady monetary policy stance.’

As the graphs below illustrate, broad conditions in financial markets have not changed markedly of late. Recent movements in bond yields and the Euro/Dollar exchange rate have been much tamer than those Mr Draghi dismissed previously as something ‘we should get used to’. Similarly, fluctuations in Germany’s Dax index have not been particularly unusual although there has been some pick-up in volatility on the VIX measure. So, our judgement is that Mr Draghi’s remarks today don’t have much to do with recent market developments but are, instead, intended to reassure investors that, if needed, the ECB is able and willing to act. In turn, this suggests that although Mr Draghi was comparatively upbeat today, the ECB realises the Greek crisis still has some distance to go. 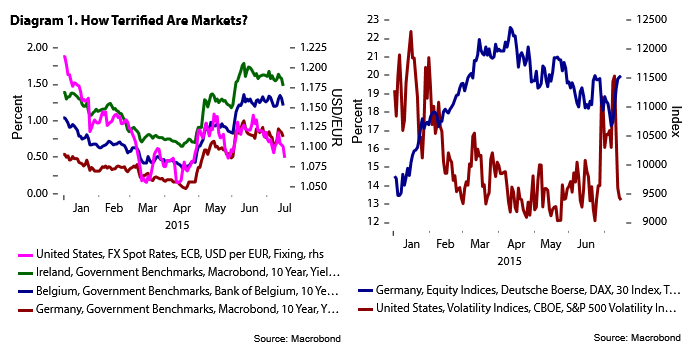 No major change in ECB thinking on the economic outlook is suggested in today’s statement although the tone is a little more positive and notes that ‘downside risks surrounding the economic outlook for the Euro area have generally been contained’. Last month’s expectation that recovery would broaden appears to have been confirmed. So, this month notes that recovery should broaden further. Perhaps drawing a little too much on ‘fedspeak’, the trend in growth in the second quarter has been marginally upgraded to ‘moderate’ from ‘modest’. The commentary also expects additional support to spending power will come from ‘the recent decline in oil prices’. However, these positive influences have to be set against a newly mentioned concern in the shape of the impact of ‘the ongoing slowdown in emerging market economies [which] continues to weigh on the global outlook’.

Mr Draghi: The Man In The Middle

In very broad terms, today’s message from Mr Draghi is intended to be reassuring, first of all, by suggesting the ECB stands ready to do more if needed, and secondly, by indicating that it thinks it won’t be needed. Mr Draghi’s relatively positive tone on Greece is much more a product of the need to provide a rationale for assistance through ELA than a ringing endorsement of the emerging deal between Greece and its creditors.

Some might argue the ECB’s current stance results in an unwarranted intervention in Greece’s favour. If that is the case, it may in part be balancing another ‘accidental’ intervention. It is also clearly the case that markets have traded with almost universal confidence of late that the ECB could and would ensure that any spill-over to the rest of the Euro area from a Greek default and/or exit from the single currency was minimised. In turn, those relatively calm conditions on financial markets significantly increased the negotiating strength of Greece’s creditors in the talks process. So, Mr Draghi’s deft touch means the ECB can be regarded as supporting both sides in various ways.