• Did Mr Draghi pre-commit to keeping rates low for a long time?

As expected, the European Central Bank left its key interest rates unchanged today. The subsequent press conference given by Mario Draghi, the ECB president, had little immediate impact on financial markets as it appeared that the ECB’s assessment of the economic and financial prospects for the Euro area has changed little in the past month. If anything, markets initially took the view that Mr Draghi was not quite as downbeat as they had expected. As a result, the exchange rate of the Euro and market interest rates firmed marginally in the aftermath of Mr Draghi’s press conference.

Talk But No Action On Interest Rates

Mr Draghi said a rate cut was discussed today but that ‘the prevailing consensus was to leave the rates unchanged’. In the past, a comment along these lines would have prompted strong expectations of a rate cut at next month’s policy meeting. However, there was a similar discussion in December and that was followed by unchanged policy rates and a notably more upbeat assessment of the outlook by Mr Draghi in January. As a result, the market reaction to today’s indication that cutting rates had been discussed was very muted.

On balance, we think Mr Draghi was reasonably dovish today. He emphasised the continuing fragility of the Euro area economy and indicated that a rate cut had been discussed. Importantly, he said that ECB policy would remain accommodative “as long as is needed”. He noted that the ECB was examining various mechanisms to ease constraints on credit availability for small and medium sized firms. However, we remain some distance from the point at which further policy action might be contemplated for a range of reasons. First of all, the ECB’s assessment of the outlook for activity and inflation has not changed markedly of late. Second, the exchange rate of the Euro and allied concerns have eased of late. Third, it is likely that a significant group on the Governing Council feel that the ECB has already eased policy as far as it can and possibly further than it should. As a result, risks from further action are may outweigh any benefits. For these reasons, significant signs of a renewed weakening in activity or a notably steeper than expected fall in inflation will be necessary to prompt a further ECB easing. We don’t think such outcomes can be entirely excluded in the months ahead.

The general tone of the comments made today by Mr Draghi did little to suggest a major policy change was anywhere close at hand. He was asked whether the ECB had discussed cutting its deposit rate that is currently at zero into negative territory. He said that the ECB had looked at this issue but that ‘the unintended consequences of negative deposit rates could be serious’. He went on to say that such an action would take the ECB into ‘uncharted waters’, suggesting that the Governing Council remain some considerable distance from such a course of action.

It may be that discussions on a rate cut today revolved around the possibility of fairly limited action that would have entailed a cut in the refinancing rate alone. Such a cut would likely have a greater impact on non-financial sector borrowers in ‘core’ economies than on their counterparts in the periphery. So, it doesn’t suggest itself as a solution to the particular weakness of the periphery. Instead, it would likely take a further adverse ‘shock’ to the Euro area as a whole to trigger such action in the near term. An abrupt strengthening of the Euro on FX markets would be an example of such a development. We see the prospect of weaker than expected activity and/or lower inflation keeping the prospect of further easing alive in the months ahead.

Markets judge that further ECB action would take quite a marked deterioration in the economic outlook and Mr Draghi made it very clear that a modest downward revision to growth in both 2013 and 2014 in the ECB’s new economic projections reflected the carryover impact of weaker recent data for the final quarter of 2012 rather than any change in the ECB’s judgement as to how the Euro area economy will perform in the next couple of years.

It remains the case that a period of relatively weak activity is envisaged but the ECB thinks that ‘a gradual recovery should commence in the second part’ of 2013. Today’s statement also rearranged the ordering of factors the ECB believes will support a recovery with export growth now more plausibly placed ahead of domestic demand. The latter is likely to remain constrained because any positive influence from the improvement in financial market conditions will be offset by ‘necessary balance sheet adjustments in the public and private sectors, and the associated tight credit conditions, (which) will continue to weigh on economic activity’. On balance, Mr Draghi and the ECB seem a little less optimistic that the former can outweigh the latter. Mr Draghi said his remarks of a month ago in regard to positive contagion only referred to a spill over from one element of financial markets to others and weren’t intended to suggest the ECB sees healthier financial markets quickly translating into improvements into the ‘real’ economy. In addition, Mr Draghi said that while the ECB was exploring a range of means to assist lending, it ‘was not planning anything specific at the moment’.

One important feature of today’s press conference was a subtle but significant change in the tone of comments in relation to the exchange rate of the Euro. A month ago the press statement had warned of the downside risks to inflation from ‘more recently, the appreciation of the Euro exchange rate’. This reference was removed from today’s statement and while Mr Draghi did repeat that a ‘sustained appreciation has the potential to alter our risk assessment’; he downplayed the exchange rate as source of significant concern at present. This likely reflects the modest pullback in the effective exchange rate of the Euro in the past month. As diagram 1 indicates it is now very close to its long term average level. 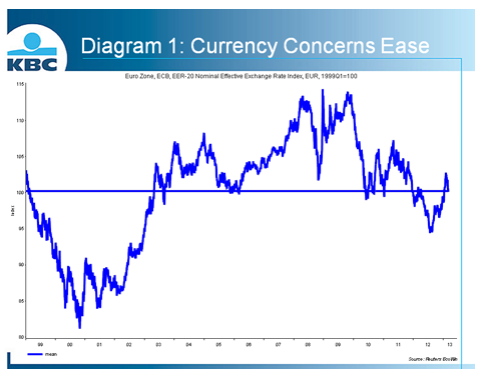 We don’t think the level of the Euro is the real issue but the ECB is alert to the risk that a sharp rise could undermine a recovery in the Euro area that as the ECB acknowledge depends heavily on a strong export performance. Last month’s ‘verbal intervention’ by Mr Draghi appears to have been successful in preventing traders thinking the Euro had become a one way bet. An FX market in which the Euro is judged to be subject to two way movements is seen as far less worrisome. However, as the dovish wing of the US Federal Reserve seems set to prevail in relation to US monetary policy and radical action is expected from the new Governors of the Bank of Japan and the Bank of England, the risks of an unwanted strengthening of the Euro may have eased in the past month but they haven’t gone away.

The new ECB projections don’t seem to have fully incorporated the impact of a stronger Euro FX rate since the December projections were prepared. We think that the exchange rate assumption used in the new ECB projections should have reduced forecasts for both growth and inflation for 2013 by about 0.2% in 2013 and by around 0.5% for 2014 relative to those made in December. However, Mr Draghi indicated that the 0.2% downward revision to growth for both years—to a new midpoint forecast of a decline in GDP of 0.5% in 2013 and positive growth of just 1% in 2013—simply reflected carryover effects. As a result, the midpoint inflation forecast for 2013 has been left unchanged and that for 2014 revised down by just 0.1 percentage point.

These limited changes suggest to us that either (i) the ECB think the underlying growth profile for the next two years is better than envisaged in December (and that of inflation slightly worse),or  (ii) the impact of the exchange rate change is seen as relatively limited or (iii) that the new projections have been ‘massaged’ somewhat. These considerations imply some possibility that growth and/or inflation could undershoot current expectations. Interestingly, Mr Draghi refused to be drawn on the expected profile of inflation over the coming two years. Given that exchange rate effects tend to influence economic aggregates with some lag, it is certainly possible that during 2014 the inflation rate could be rising well below a pace consistent with the ECB’s ‘below but close to the 2% target’.

Has The ECB Made A New Promise?

We think that Mr Draghi may have broken some new ground in his comments today in relation to ECB policy. In arguing why an improvement in the Euro area might be expected, he said ECB policy would remain accommodative for ‘as long as needed’ On a number of occasions previously, the ECB indicated that it would maintain its refinancing operation as fixed rate tenders and at full allotment for ‘as long as needed’ but we don’t recall this phrasing being used in relation to the general stance of monetary policy. This might be thought to be inconsistent with the more frequently made assertion that the ECB ‘never pre- commits’ but Mr Draghi also used that phrase today. The spirit of today’s ‘as long as needed’ remark seems to move the ECB somewhat closer to the forward-looking commitments given in US Federal Reserve policy statements or remarks by the incoming Bank of Japan Governor Mr Kuroda, who said that ‘it will do whatever it can to beat inflation’. In that respect Mr Draghi’s remarks today may be part of a loosely coordinated international effort by monetary authorities to commit to ensuring economic recovery.