Growth can pick-up progressively through 2013 and 2014 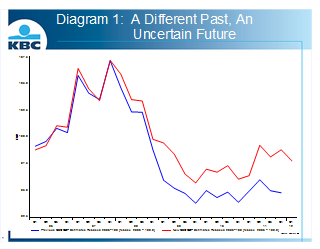 As the diagram above indicates, today’s growth data suggest the Irish economy is continuing to work its way through an uneven and extended ‘bottoming-out’ process after sharp falls in activity through 2008 and 2009.  The protracted nature of this process is consistent with international research into the experience of economies after severe financial crises.  It reflects the impact on domestic spending of an adjustment process in which the Government, businesses and households are all attempting to put their financial positions on a sounder footing.  The inevitable decline in domestic activity in Ireland in recent years has been compounded by the weakness of the global economy and persistent problems in the Euro area in particular.  These influences are likely to remain in place through 2012 and, as a result, we continue to expect that GDP will increase by about 0.3% while GNP will likely decline by around 0.7%.

Data for the first quarter of 2012 show a somewhat weaker than expected outturn for GDP and GNP.  The 1.1% drop in GDP is largely driven by two factors.  First of all, a sharp fall in consumer spending (down 2.1% quarter on quarter) may reflect a bringing forward of purchases ahead of the increase in the upper VAT rate at the beginning of this year.  In this context, consumer spending for the 4th quarter of 2011 was revised sharply upwards (+1.8% against +0.5%).  Although we expect a 2% decline for the year as a whole, we think consumer spending will slowly stabilise through the remainder of 2012 helped by the recent ECB rate cut and some easing in energy costs.

Irish economic growth in the first three months of 2012 was also depressed by a significant increase in imports (+4.9%) after declines in each of the quarters of 2011. This likely reflects the anticipation of a scaling-up in output that was signalled in a range of relatively upbeat surveys of the Irish business sector in the first half of this year. We would also note that about a third of the increase in imports in the first quarter resulted from a large increase in imports of aircraft.  (However, as these aircraft also show up in capital spending on machinery and equipment, their impact on growth data is neutral.

Encouragingly, export growth at 2.6% quarter on quarter was the strongest in a year and a half and there were also signs of a further easing in the pace of decline of building and construction output which fell just 1.1%.  Although weaker consumer spending and stronger imports resulted in a poorer outturn for the first quarter, the resilience of exports coupled with upward revisions to previous quarters imply that for 2012 as a whole, a modest rise in GDP can still be expected.

Significant back revisions are modestly positive

Today also saw the Central Statistics Office publish revisions to growth data back to 2007.  These suggest that the cumulative drop in GDP between the early 2007 peak and the trough seen at the end of 2009 was slightly smaller (-9.8%) than previously estimated (-11.3%) as the diagram above suggests.  The drop in GNP between an early 2008 peak and the end of 2012 was notably smaller (-13.0% against -17.3%).  Perhaps more significantly, the growth rate for GDP in 2011 was revised up from 0.7% to 1.4% meaning the money value of 2011 GDP was €159 bio rather than €156.4 bio.  At the margin, this helps perceptions of the public finances.  As a result of this change, the 2012 General Government Balance is now fractionally lower at 12.9% of GDP rather than the previous estimate of 13.1 of GDP.  If this trend is sustained through 2012 and into 2013, it could imply that the scale of budget adjustment required in December would be about €300 mio less than previously envisaged.  However, the likelihood is that this influence will be dwarfed by a range of other factors driving the Budget arithmetic.

Today’s growth data again serve to remind us of the particular volatility of statistical measures of Irish economic activity.  As a result, they argue against a spurious precision in commentary on the economy.  Our current estimate that GDP growth will be in the region of 0.3% in 2012 reflects our best efforts to quantify likely developments in the main economic sectors but it is probably best interpreted in a qualitative fashion as suggesting the expectation that growth is likely to be marginally positive this year.

Volatility in measures of economic activity seem to reflect at least three separate influences at present.  First of all, the sheer size of the multinational sector in the Irish economy means small vagaries in the scale or timing of changes in production in this sector can have an outsized impact on economic growth data.  Second, the Irish economy lacks decisive momentum in either direction at present.  As a result, small and possibly random fluctuations can drive quarterly growth data up or down in a manner that doesn’t properly reflect changes in underlying conditions.  Finally, as with a lot of economic analysis, our statistical knowledge of the Irish economy has to be seen as a work in progress.  Today’s revisions stem from both a regular rebasing of growth figures and more importantly the impact of improved information on trade in services, factor income flows and household purchases.  Progress in these areas is very welcome but there seem to be continuing anomalies in the data such as the increasing divergence between national accounts and merchandise classifications of trade or the surprising reported rise in Government current spending in the first quarter that sits uncomfortably with the drop in the output of Public Administration and Defence sectors and more generally with the perceived impact of the Public Sector retirement scheme.

For a variety of reasons, interpretations of today’s data may vary considerably.  Our take is that they are consistent with an Irish economy that isn’t moving significantly in either direction and one in which conditions vary widely across sectors.  Some signs of an easing in the intensity of the domestic adjustment is evident in today’s numbers as it is in recent signals coming from tax revenues and a range of surveys.  Survey indicators also point towards a relatively solid export performance that is also confirmed in today’s national accounts data.  If the resilience in exports is sustained and the scale of domestic adjustment eases further, the likelihood is that the progressive strengthening in activity envisaged in most forecasts of the Irish economy for 2013 and 2014 will materialise.