Residential property price data for March show that strong momentum in Irish housing prices is continuing. Downward revisions to the two preceding months mean the pace of price increases is a little less intense than previously estimated but the broad picture of an Irish housing market in which exceptionally strong demand is outpacing constrained supply remains intact.

In contrast to the experience of the past two years when official data showed a monthly fall in March, prices rose in March 2017, albeit by a marginal 0.1%, meaning the annual rate of house price inflation rose to 9.6% from 9.4% in February, resulting in the fastest pace of growth since May 2015.

As diagram I indicates, the strength in the March data was most notable in Dublin where the annual rate picked up from 7.5% in February to 8.2% in March, the fastest pace since June 2016. In contrast, house price inflation outside the capital eased to 11.8% in March from February’s twenty month peak. 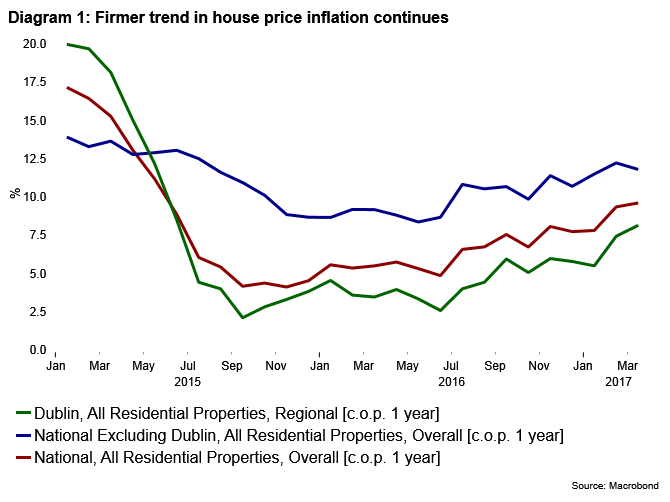 The reasons for the continuing upward pressure on prices are well understood and most focus is rightly placed on the weakness of new supply. However, today’s release also shows a roughly 10% increase in market transactions (on the basis of filings data) in the first quarter. This would lend some support to our view that the impetus to faster house price inflation of late from increasing demand may be underestimated.

A stronger than expected Irish economic performance of late is underpinning the release of several years of pent up demand and this is further aggravated by rapid increases in residential rents. In these circumstances, the introduction of the governments ‘help to buy scheme’ and some easing in the Central Bank’s lending limits in late 2016 may, through activating demand and boosting market sentiment, have quickly translated into a ratcheting up of house price inflation.  To the extent that these policy changes are one-off in nature and some modest pick-up in supply is anticipated, this suggests that house price inflation may ease back somewhat as 2017 progresses.

While attention is understandably and appropriately focussed on the difficulties a poorly functioning housing market poses to the Irish economy, the impact of the turn in property prices on household finances also needs to be taken into account. As figures released earlier this week by the Central Bank show, at the aggregate level, Irish households have consistently reduced their borrowings. At the same time, their net worth has increased largely due to the increase in the value of residential properties and a modest if steady, build-up in financial assets.

We have updated the recent Central Bank financial accounts data on the basis of today’s new house price data. The results in diagram 2 show that the reasonably steady pace of recovery in the aggregate financial situation of Irish households evident in recent years has continued in early 2017. This recent trend is altogether different from the rollercoaster that preceded it.

The rise in property prices has been influential in improving household finances at the aggregate level. In this context, the net residential property worth of Irish households has increased by about €45bn in the past year but this isn’t a reflection of notably easier credit conditions as there hasn’t been any marked acceleration in average loan size. Indeed, as the stock of mortgage debt is still decreasing and households are modestly increasing rather than withdrawing equity from the Irish housing market, there is no evidence of any threatening spill-over to consumer spending.   These developments suggest a reasonably healthy dynamic at present in this context. The key task for domestic policymakers is to ensure these metrics remain on a sustainable path while delivering a marked improvement in the functioning of the Irish housing market. 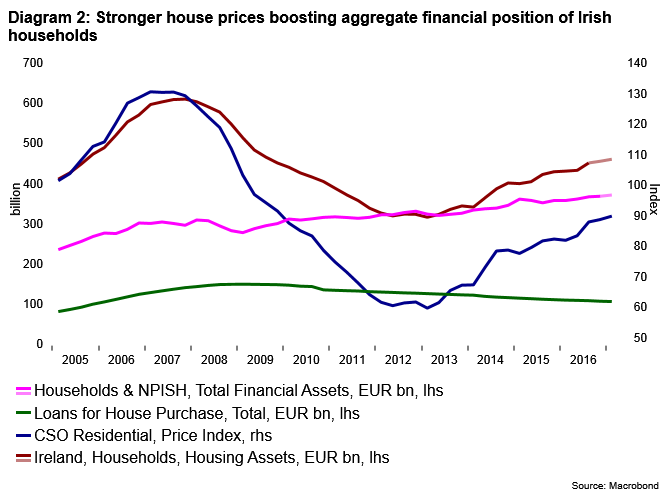