Swords is the latest new hub as part of KBC’s retail banking and hub expansion.

The new hub will be managed by David Milne, pictured here with his team, Mark Rooney, Leanne O’Farrell, Amy O’Connor and Rachel Dowler.

The move into Swords is a key step in KBC’s retail expansion and is the first of five new hubs planned to open this year, with Stillorgan, Dundrum and Maynooth also confirmed as locations to date. The opening in Swords follows the launch of other hubs in Baggot Street and Grand Canal in Dublin, Cork, Limerick and Galway over the past 18 months.

The expansion is part of KBC’s development into a full service retail bank, having launched a number of new products including a current account, suite of insurance products, credit card, personal loans and mortgage tracker mover product. Further retail product and service developments are planned through the year. 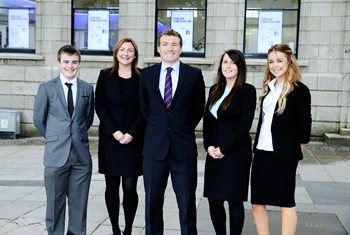