KBC Bank Ireland today officially opened its latest hub in Forbes Street in the Grand Canal Square area of Dublin’s docklands, one of the city’s most vibrant commercial and residential locations, which follows the launch of other hubs in Dublin, Cork, Limerick and Galway over the past 18 months.

KBC also announced today that it is opening five additional retail banking hubs this year with Swords (opening this week), Stillorgan, Dundrum and Maynooth confirmed as locations so far. The expansion is part of KBC’s development into a full service retail bank, having also launched a number of new products including a current account, suite of insurance products, credit card and mortgage tracker mover product. Further retail product and service developments are planned through the year.

Speaking at the opening, Minister for Jobs, Enterprise and Innovation, Richard Bruton TD said: “I am delighted to welcome the announcement by KBC that it is expanding its network of retail banking hubs, which will provide more competition in the banking market and create jobs. At the heart of our Action Plan for Jobs is developing new sources of credit for SMEs and we have put in place a range of measures to support new non-bank sources of finance. The retail banks have a key part to play in this also. I wish KBC every success with this venture in Grand Canal.”

Wim Verbraeken, Chief Executive, KBC Bank Ireland said: “KBC Bank Ireland is today officially opening a flagship new hub in Grand Canal Square, the heart of Ireland’s technology and financial centre. We will also open five additional retail banking hubs by year end, with a focus on busy footfall locations in major urban centres. Following the implementation of our retail banking strategy over the past two years, KBC is now a genuine retail banking alternative for customers looking for competitive products, better choice and leading customer service. We will continue to grow our brand and customer base in Ireland by promoting our attractive products and services.”

In addition to the hub expansion, KBC has developed its distribution network significantly with an increased number of advisors on the road, mobile bank units and technological innovation including a customer service online chat facility.

The new 1,771 sq ft retail unit is located on the east side of the Grand Canal Square Hotel & Residences Development (The Marker Residences) on Forbes Street, the primary link between the River Liffey and Grand Canal Square, and provides access to office, retail units and residential units. 41 years in Ireland, KBC Bank Ireland is part of the KBC Group, one of Europe’s largest banks. 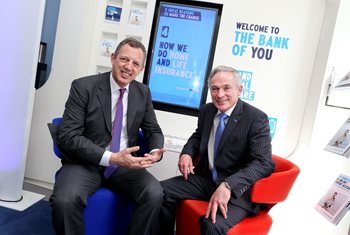