Jobs growth now running at 3.4%, suggesting the underlying pace of Irish economic growth is now around 4.5-5%

…but alongside demographic data suggests scope for strong growth to persist

...and migration driven by ‘demand pull’ rather than ‘crisis-push’ factors

Recovery still work in progress as GDP 53% above pre-crisis peak, employment up 0.9% and population up 10%.

The latest Irish jobs data suggest the Irish economy is still showing strong positive momentum while new demographic data suggest scope for favourable developments to continue in coming years. The jobs data imply scope for persistently strong increases in activity without any marked ‘overheating’ of the labour market. However, a rapidly increasing population implies sustained pressures in areas such as housing.

Employment data show there were 74.1k more people at work in the second quarter of 2018 than a year earlier. This 3.4% increase is a step-up from the 2.9% rate recorded both in the first quarter of 2018 and on average in 2017. A 0.8% increase in numbers at work between the first and second quarters (which translates to a 3.1% annualised pace in in the past three months) suggests jobs growth remains on a strong and reasonably stable trajectory at present.

In turn, given ongoing productivity gains, these jobs data suggest that the underlying growth rate of the Irish economy is in the region of 4.5-5% at present. We continue to forecast GDP growth of 6% in 2018 reflecting the boost to that metric from the activities of a small number of multinational companies operating in Ireland. 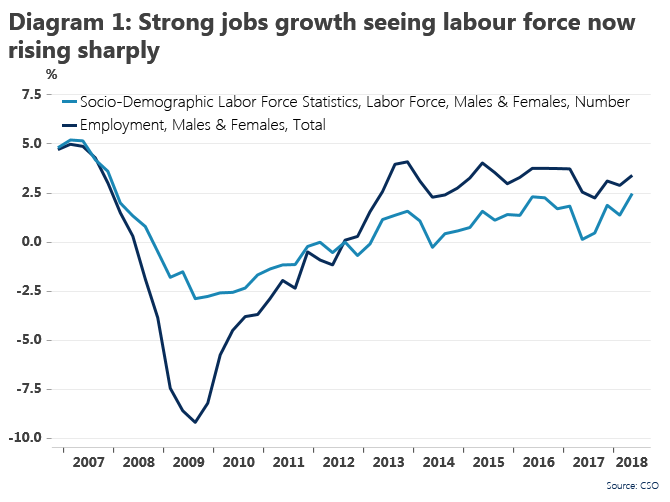 A notable aspect of today’s releases is a marked upward revision to recent unemployment data. As diagram 1 indicates, it remains the case that unemployment is on a strongly downward trajectory. As we noted in our comment on the previous data, the particularly large drop in unemployment at that point seemed to reflect an unusually weak increase in the labour force. In the latest data labour force growth has rebounded to a 2.4% rate of increase, the fastest pace since late 2007. With the labour force growing notably faster of late, the estimated pace of decline in unemployment has eased accordingly. As a result, the unemployment rate for July is now put at 5.9% markedly higher than the previous estimate of 5.1%.

One potentially troublesome feature of today’s jobs data is the particular strength of job gains in Dublin. In the year to Q2 2018, Dublin saw job gains of 45.5k (+7%) whereas the rest of the country saw gains of 28.6K (+1.9%). The only area seeing job losses in the past year was the border region, where employment was down 3k or 1.6% which may reflect some Brexit related difficulties. 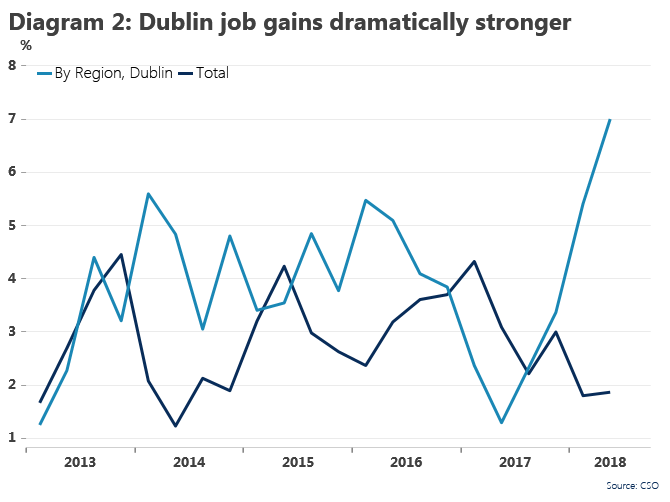 As diagram 2 indicates, the divergence between job gains in Dublin and elsewhere is the largest seen through the period of economic recovery. It might have been expected that job gains would become more widely spread across the country as a whole as domestic demand improved and fiscal policy turned from restrictive to supportive.  It could be that part of this divergence is statistical rather than real and reflects the change in the labour force survey introduced in 2017 but otherwise it points in a potentially unhealthy direction in terms of regional development and capacity utilisation.

Demographic data also released today show a notably smaller divergence in population trends than in jobs performance between Dublin and the rest of Ireland. The population of the capital increased by 20.5k or 1.5% whereas the population outside of Dublin increased by 44k or 1.3%.  So, the job intensity of the capital (or the statistical issues around the regional distribution of jobs) seems to have increased of late.

Population and migration data also released today show that in the twelve months to April 2018 the population of Ireland has increase by 1.3%% or 64.5k, the fastest pace of population growth since 2008. With the ‘natural’ increase marginally down at 30.5k from 33.1k in 2017, this pick-up largely reflects the turnaround  in migration of late with 2018 seeing the highest inward migration since 2008 (at 90.3k) and the lowest emigration (at 56.3k) since 2008.

Ireland population growth of 1.3% is notably faster than the EU average of 0.2%. Only Malta (+3.3%) and Luxembourg (+1.9%) posted faster increases, both of which were due to extremely rapid rates of inward migration.

Ireland’s migration flows are unusual in the European context in that Irish born individuals represent relatively large numbers of both those emigrating (50.2%) and coming into the country (31.5%). These ‘native‘ flows reflect  a consistently strong propensity towards international travel as well as the stronger if more variable influence of economic conditions. As a result, the 2018 data show that inward and outward flows of Irish nationals (of roughly 28k in each direction) were broadly in balance after significant but diminishing net outflows in previous years.

The flow of non-Irish born people into and out of the country is strongly linked to domestic economic conditions and as such today’s data point towards strong momentum in the Irish economy at present. Eurostat data show that in 2017 the employment rate of non-Irish born residents at 69% was slightly above that of Irish born residents (67.2% whereas the EU norm sees a foreign born employment rate of 64.6% compared to a domestically born employment rate of 68.1%. This divergence is notably more pronounced in countries such as Belgium (56.5%% v 64.7%), the Netherlands (63.0% v 78.0%) or France (56.6% v 66.0%).

Ireland’s demographic profile remains exceptionally favourable in a European context as diagram 3 below illustrates. Ireland continues to have the highest birth rate (1.3 per 1,000) and the lowest death rate 0.6 (per 1,000) in the EU 28 (average births 9.9 per 1,000, 10.3 average deaths per 1,000).Together with economically driven net inward migration, this presents scope to sustain a robust rate of economic growth in coming years. 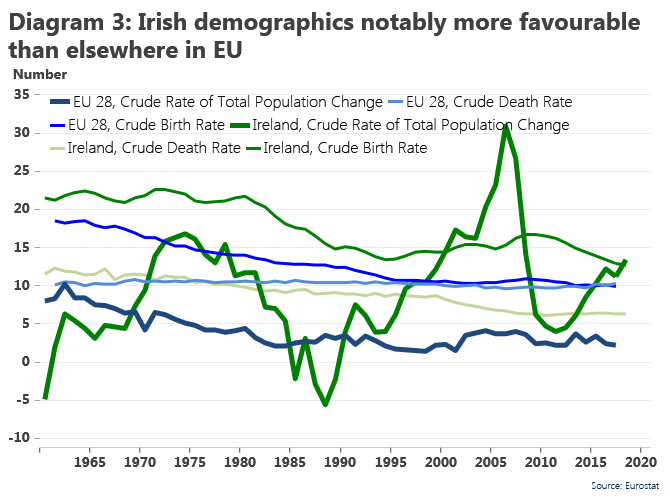 Today’s jobs and population data provide some perspective on the extent of the turnaround in the Irish economy in recent years. It is very clear that the current pace of growth in jobs (+3.4%) and population (+1.3%) is indicative of strongly improving conditions. It is less clear whether the cumulative improvement now points to an economy now facing major capacity constraints.

As diagram y indicates, real GDP is now some 53% above its pre-crisis peak while employment is now some 19k or 0.9% above its pre-crisis high point (annual GNI* in current prices is about 9.5% higher).  In the interim, the population has grown by some 10% and while the working age population has grown more slowly the increase is still about 154k. The strong increase in population also implies that household income growth per capita is still somewhat short of pre-crisis levels in real terms. These considerations would suggest recovery is still a work in progress. 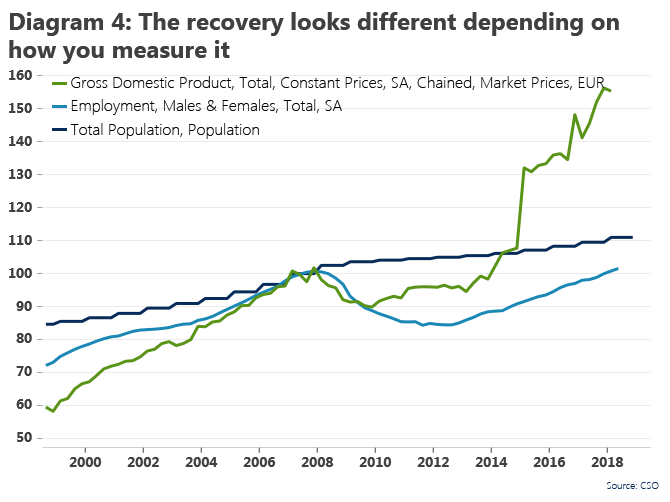 With scope for significant levels of economically driven inward migration, there appears scope for the Irish economy to sustain strong rates of growth provided that serious bottlenecks in areas such as housing can be resolved

The momentum in Irish job and population growth suggests that, in addition to inadequate supply, the particular strength of demand factors is a key driver of rapid Irish property price inflation at present.  With immigration running at 90k and a likely limited increase in availability coming from emigration of 56k, it is readily possible to see migration flows implying prospective demand for 10-15k housing units at present.