Irish house prices remained in positive territory in June rising 0.3% from May but annual house price inflation edged lower to 0.1% from 0.3% in May. The year on year increase is the lowest since June 2013 but, overall, these data suggest any adverse effects on Irish property valuations from Covid-19 are still reasonably contained.

In spite of a rise of 1.4% in apartment prices, Dublin residential prices fell by 0.2% between May and June and this monthly drop translated into a  0.9% year-on-year decline. The weakening in house prices likely reflects the impact of affordability constraints in some parts of Dublin and increased supply in others.

In contrast, prices outside the capital increased a healthy 0.7% month-on-month leaving them 0.9% higher than a year earlier. Variation in prices trends between the capital and elsewhere have been a feature of the Irish property market for some time but the widening gap in June may also reflect a faster adjustment in pricing in Dublin than in other parts of the country.

The somewhat softer trend in Irish property prices of late is very modest in comparison to the trend in housing transactions; sales filed in June on which the price data are based were some 23% per cent lower than a year earlier. Encouragingly, however, the June activity figure was 18% higher than May indicating some element of recovery from the major disruptive effect of the lock-down on all the key elements of the property purchase process.

It seems very clear that the major impact of Covid-19 on the Irish property market will be felt in the shape of lower volumes of transactions rather than lower property values but some softness in prices still appears likely. The initial resilience of prices may have been supported further by a modest trend increase in the average size of mortgages drawn down through 2019 and into the first quarter of 2020 but as the diagram below illustrates, the average home purchase mortgage size was 1.7% lower in Q2 than a year earlier, implying the possibility of some softening in prices as 2020 progresses. 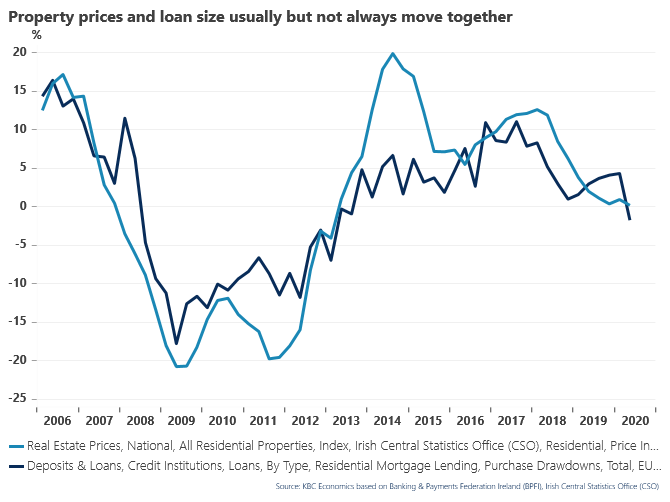 Beyond the logistical difficulties around property purchase, the major negative impact of the pandemic on economic activity, employment and income prospects as well as increased uncertainty can be expected to weigh on the Irish property market through the second half of 2020 and possibly beyond. How large and lasting these effects may be will depend significantly on the trajectory of Covid-19 and the policy measures taken in response.

With numbers at work declining materially in the second quarter and likely to recover only gradually thereafter, some adjustment in Irish house prices remains a material threat. The key issue is the speed and strength of any recovery in employment in the second half of the year as a sharp turnaround would likely see only a small and short-lived weakening in property values.

Significantly, the limited easing in Irish property prices thus far suggests that any weakness through the remainder of 2020 could be less than we previously feared. In this context, it should be noted that the resilience of Irish property values is mirrored in recent developments in the US and UK as the diagram below illustrates. 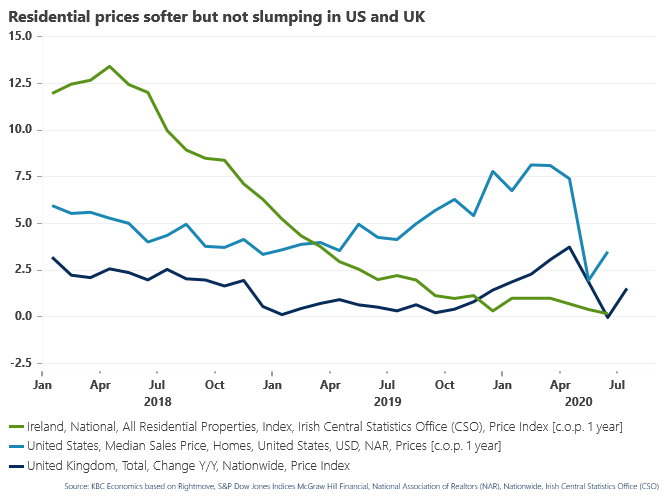 In part, the recent resilience of US and UK property prices reflects the scale of fiscal measures in the US and the specific measures undertaken in the UK that included a temporary cut in stamp duty on properties under £500k. It is estimated that the cut in stamp duty would represent a potential saving of around 3% for UK homebuyers that might reduce near term downward pressure on British property values. The €10k increase in the ceiling for the ‘help to buy’ scheme announced by the Irish government as part of the July jobs package may provide a similar if somewhat smaller support to new home prices in Ireland.

Another factor supporting property prices globally at present may be the current softness in interest  rates reflecting the exceptional actions of central banks in response to the pandemic. In much the same way as these actions are underpinning financial assets such as equity markets, the expectation that borrowing costs could remain markedly lower for much longer is a positive for property as an asset class.

In this regard, the graph below shows that while 5 year swap costs have fallen far less in the Euro area than elsewhere since the start of the year, a broadly held view that Covid-19 has materially altered the outlook for interest rates for the next few years represents a significant counterweight to any negative effects of the pandemic on property values. 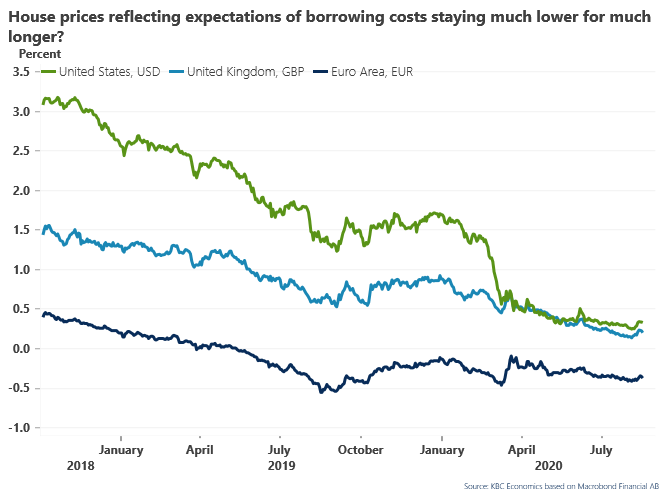