Demand, supply and uncertainty all contributing to softening in property price inflation

Irish property prices fell (-0.4%) for the third month in a row between December and January, following smaller monthly declines in both November (-0.3%) and December (-0.2%). This was caused by 1.6% monthly drop in Dublin prices which contrasted with a solid 0.9% rise in property values across the rest of Ireland.

More fundamentally, the January data continue a clear slowing trend in Irish property price inflation that began last spring. As a result, the year on year increase in January at 5.6% is the smallest rate of increase since June 2016 (+5.5%). While this represents a marked easing from the three year high in property price inflation seen in April 2018 (+13.3%), it represents a more measured change from the 6.4% y/y price increase recorded in December.

Our sense is that a combination of factors is acting to slow the increase in Irish property prices at present.  Restricted demand growth, rising supply and reduced consumer confidence are likely all playing some role in restraining the growth in Irish property values as 2019 begins.

Demand growth has been increasingly restricted by affordability constraints as Central Bank of Ireland loan to income limits have become more important impediments to increased borrowing. This was amplified by a  tightening in these measures in late 2017 (reducing the proportion of ‘movers’ who could get exemptions to these limits) that had a progressively greater effect through the course of last year as lenders endeavoured to ensure they remained within these limits at the end of 2018. Lags in the sales process means this would have influenced the January property price data and the fact that prices declined in Dublin where property prices are more elevated relative to incomes is also consistent with such an impact.

With Irish property price inflation easing and wage growth picking up, (although the latest increase in weekly earning at 4% in Q4 2018 is probably too high to be sustainable), it appears that these two demand side factors may be moving onto more consistent paths. Moreover, as financial market expectations for interest rates now suggest borrowing costs are unlikely to rise sharply any time soon, it appears that affordability factors should be broadly supportive of modest gains in house prices.

Supply factors also seem to be developing in a way that would restrain but not reverse gains in property values. Although homebuilding at 18k units in 2018 fell well short of estimates of ‘normal ‘demand at around 35k, it was 25% higher than in 2017 and the number of new homes completed was nearly four times higher than in 2013. Moreover, supply looks set to increase materially further in coming years and this prospect should help constrain price expectations and curbing any tendency towards ‘panic’ buying.

If demand and supply factors within the Irish housing market itself are moving in directions consistent with greater stability in Irish property prices, a very uncertain ‘macro’ environment presents an immediate threat of notably more volatile conditions.

As the diagram below illustrates the strength or otherwise of Irish house prices is usually correlated with movements in consumer sentiment. The recent sharp drop in confidence reflects fears that the economic fallout stemming from a still very unclear and threatening Brexit process could be very damaging to the income and job prospects of Irish consumers. Such concerns could cast a shadow over property transactions and prices in early 2019. How persistent or problematic such concerns may prove to be depends heavily on whether a ‘crash out’ Brexit can be avoided in coming weeks. 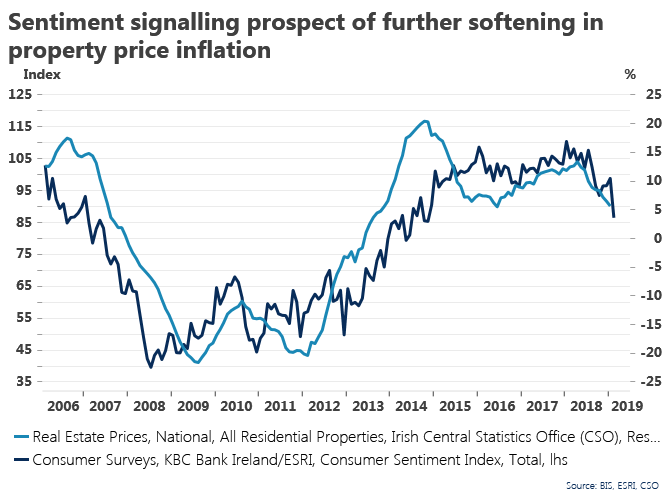