Irish population growth increased slightly in the twelve month period to April 2017 to reach 1.1%, the fastest pace since 2008. The 52.9k increase in population is very similar to the 2016 outturn of 51.8k and marks the third year in which net inward migration is boosting the ‘natural’ increase driven by a strong excess of births (63.9k) over deaths (33.1k). Today's release also incorporates marginal upward revisions to estimates for previous years to take account of the stronger than anticipated Census 2016 results.

As diagram 1 illustrates, Irish population trends are very different to those in our key economic partners. Ireland’s 1.1% population growth rate at present is nearly four times the current EU average of 0.3% (and, on Eurostat figures, the second fastest growing population after Luxembourg). Eurostat figures also show ten countries of the EU 28 reporting population declines in 2016. So, the Irish experience is quite exceptional. The key drivers of Ireland’s demographic dynamics are a comparatively large number of births relative to deaths as well as a much greater variability in migration than in most other countries due to the particular sensitivity of Irish migration flows to domestic economic conditions. 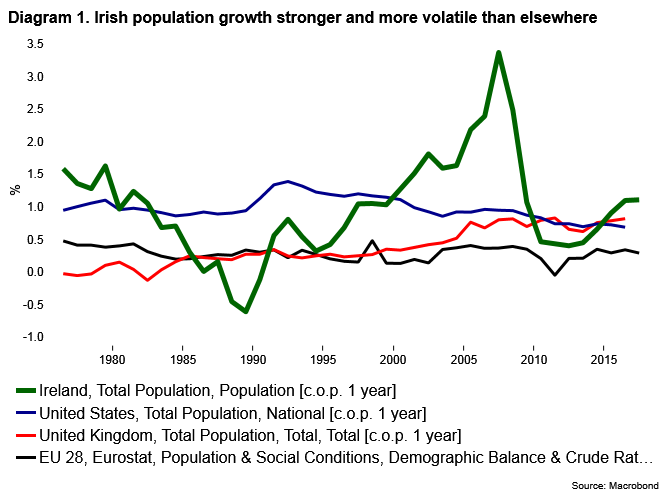 The pick-up in Irish population growth in 2017 is relatively modest and reflects a small increase in net inward migration,+3.6K to a total of 19.8k in the year to April 2017. We would not be surprised to see these numbers revised higher in the future and/or a sharper increase in inward migration to emerging in coming years. While migration trends owe much to changes in Irish economic conditions, today’s data highlight the importance and complex nature of two way flows.

The 2017 data show both a small increase in inward migration (+2.3k) and an even smaller drop in emigration (-1.4k).  Within these numbers, there was a clear drop (6.3K) in emigration by Irish nationals and a possibly surprising if marginal drop (-1k) in immigration by Irish nationals. While it is important not to over-interpret fractional changes, these developments might suggest that while ‘push’ factors have eased as the Irish economy has improved, ‘pull’ factors may not have altered to the point where opportunities look dramatically better to those who may have left in recent years.

In contrast, emigration by non-Irish nationals picked up (+4.9k) in 2017 while inward migration also strengthened (+3.3k). These contrasting developments may point towards the increasing importance of short term migration flows in the Irish economy as sectors ‘right-size’ to the emerging recovery. As the 2017 data also saw a notable pick-up in migration by nationals from countries beyond traditional trade/travel partners, this pattern may also owe something to short-term visa restrictions.

While migration flows tend to be the most volatile element of Irish population changes, arguably the most notable aspect of Ireland’s demographic profile is that it has the highest birth rate and the lowest death rate in the EU 28. This also translates into the lowest average age in the EU.

These developments enhance Ireland’s potential growth rate through the prospect of a comparatively strong rate of labour force growth in the future. This potential is further augmented by a stronger proportion of 3rd level educational qualifications among immigrants (64%) than among emigrants (44%). More immediately, strong population growth is underpinning strong demand for consumer goods and services at present as exemplified by today’s retail sales data for August 2017 which show an annual increase in underlying retail sales (excluding cars) of 6.7%. 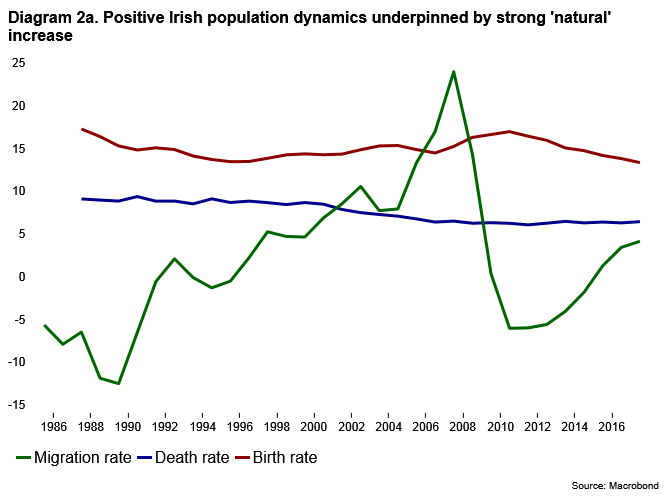 As domestic economic conditions improve, we would expect Irish population growth to increase modestly further in coming years. This is expected to be driven by a step-up in net inward migration partly reflecting a reversal of some of the exceptional flows of the downturn years and also stemming from the opportunities and requirements that follow from Ireland’s position as a hub for multinational activities.

Diagrams 2b below highlights the strong contrast between a rapid strong ‘natural’ increase (i.e. births less deaths) in Ireland and the relatively similar rate of births and deaths across the EU as a whole. 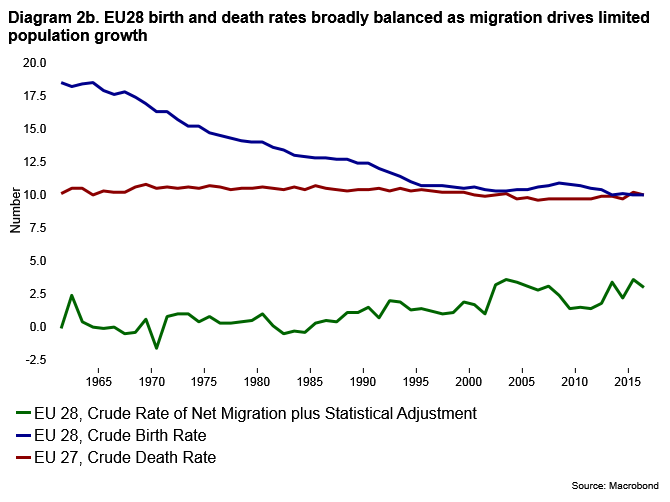