Slower job growth in late 2015 at odds with other indicators but injects a note of caution.

Increase in labour force hints at improvement in perceptions of job prospects by job seekers.

Irish employment data for the final quarter of 2015 show the improvement in the jobs market is continuing and is becoming more broadly based across economic sectors. However, the pace of jobs growth in late 2015 was a little weaker than we expected. We think this may largely reflect statistical ‘noise’ rather than any marked easing in the pace of jobs growth. That said, it is consistent with our expectation that the pace of GDP growth will moderate clearly from around 7% in 2015 to a little under 5% in 2016. We see jobs growth in 2016 being broadly similar to the 2015 outturn and expect this to push the unemployment rate to or below 8% by end year.

While the slightly softer tone of the final quarter injects some note of caution, the data for 2015 as a whole are very impressive. Numbers at work were 49.7k higher than in 2014, a 2.6% rise and the strongest pace of growth since 2007. The increase in full-time employment was even stronger at 51.9k or 3.5%, suggesting the recovery is moving to a more mature phase.  Similarly, numbers at work were higher in 2015 than a year earlier in every one of the 14 economic sectors identified in these data.  This signals that the upturn is now being seen across a wide range of areas of activity as domestic spending has begun to recover. 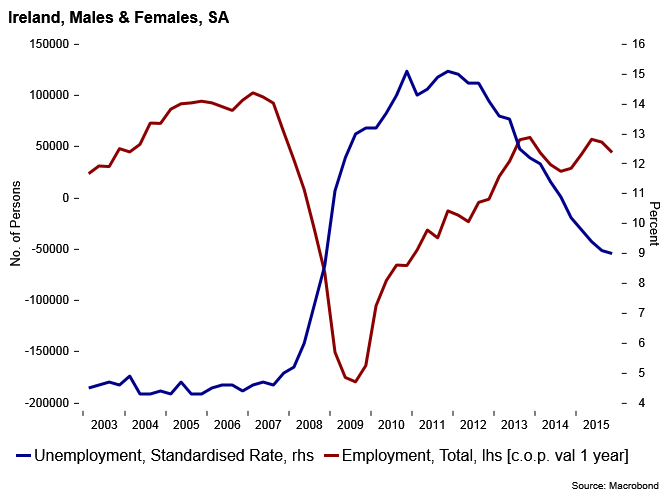 Numbers at work rose 4.7k in the final quarter of 2015 (+0.2%), the smallest gain in eighteen months.  This softish outturn was largely due to marked weakness in two areas; employment in in Industry which fell 5.5k (-2.2%) for the weakest quarterly performance in this sector since the third quarter of 2009 and jobs in Agriculture which shed 3.7k jobs (-3.3%), the poorest outturn in that area since the start of 2014.

At this point we would speculate that these particular results likely owe more to statistical ‘noise’ than to any definitive signal of a softer trend in job creation of late. In the same vein, a 7.1k increase (+5.2%) in employment in accommodation and food services may reflect a correction of excessive weakness reported in earlier quarters' results.

With domestic spending on a strengthening trajectory and a strong pipeline of job announcements in the multinational sector, it would be surprising if labour demand were to tail off. There also appears to be a pick-up in labour supply of late with fourth quarter data showing the labour force growing faster than employment on a quarterly basis for the first time in 2 ½ years. We interpret this as signalling improved perceptions of the jobs market by prospective job seekers, implying the return of previously 'discouraged workers' who exited the jobs market. Another factor is probably the spread of hiring into areas such as construction, retailing and tourism that entail broader opportunities for labour force activation.

In turn, the increase in labour force participation, allied to the slightly slower pace of jobs growth, meant that the monthly unemployment rates for late 2015 and early 2016 were revised up from previous estimates. As a result, the January 2016 jobless rate now stands at 8.9% rather than the previous 8.6%. As we still expect robust jobs growth in the coming year, we think unemployment is likely to average close to 8% and end the year clearly below that level. However, the details of the fourth quarter data hint that stronger job conditions will increase the number of additional entrants to the labour force. This may be through migration or increased participation of older workers as well as the entry of younger people currently in education or otherwise outside the workforce at present.