Numbers at work rise 2.9%, about twice the pace of the UK or Euro area

Irish employment data for the third quarter of 2016 suggest the Irish jobs market continued to show strong momentum through the summer months with robust jobs growth continuing and prompting a further significant fall in unemployment as diagram 1 below indicates. Encouragingly, the details of the report suggest a broadening of the recovery in terms of the regional, sectoral, gender and educational spread of jobs growth in the Irish economy of late of late.

It is likely that jobs growth will ease somewhat in coming quarters as the impact of weaker Sterling and more broadly based uncertainty about global economic developments prompt a more cautious approach to new hiring. However, the spread of job gains seen in today’s data for the third quarter hints at a capacity to weather potentially more difficult economic conditions in the coming year. 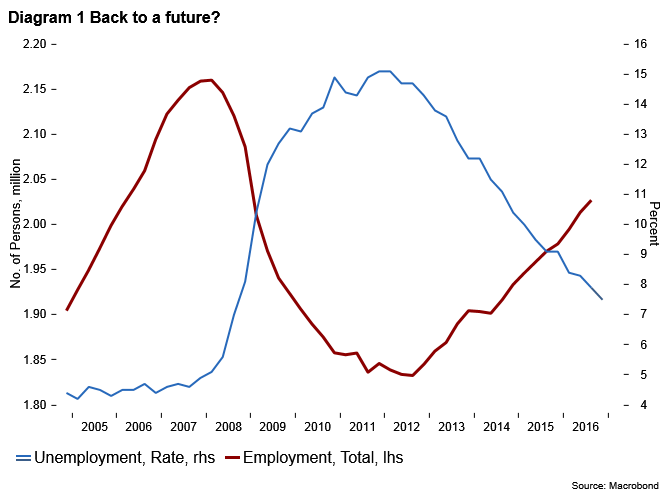 Numbers at work in the Irish economy were 57.5k higher in the 3rd quarter of 2016 than a year earlier. This 2.9% pace of increase compares with increases of 1.7% in the US and 1.4% in the UK over the same time period. The latest available data for the Euro area show jobs growth of 1.4% in the year to the second quarter of 2016.

On a seasonally adjusted basis, numbers at work in Ireland increased by 13.5k between the second and third quarters of 2016. This translates to an annualised rate of 2.7%, suggesting recent momentum in the jobs market has remained robust. In turn, this has prompted a continuing decline in joblessness. On the basis of today’s data the monthly unemployment rate for October 2016 has been revised down to 7.5% (from 7.7% previously). So, unemployment is now slightly less than half of the January 2012 peak of 15.2%.

Today’s robust jobs data are more consistent with the tone of recent house price data than with retail sales, tax revenues or survey data that suggest a clear moderation in the pace of growth in Irish economic activity of late. In part, this may reflect lags typically seen in employment data but it also likely owes something both to a continuously cautious pace of hiring in recent years as well as the recent spread of the recovery into more employment intensive areas of activity.

While we expect a clearly weaker pace of employment growth in the final quarter of 2016 in response to the softer tone of some activity indicators of late, today’s data have prompted us to raise our forecast marginally for employment growth for the full year of 2016 from 2.7% to 2.8% while we have also reduced our forecast of the average unemployment rate fractionally to 8.0%.

We continue to see jobs growth in the region of 2% for 2017. With the emerging recovery in the workforce being boosted by the return to net inward migration (potentially picking up once the UK invokes Article 50 to leave the EU) and some increase in participation rates, job gains of this magnitude could result in an average unemployment rate next year close to 7%.

The details of the 3rd quarter jobs data are encouraging in many respects. 12 of the 14 industrial sectors posted year-on year gains, the exceptions being administrative and support services (down 1.9k after strong gains earlier in the year) and public administration and defence (a likely temporary drop of 1.5k).  Gains in industry (+15.4k),  accommodation and food services (+13.4k) and construction (+9.3K) were particularly strong and emphasise that the pace of recovery varies significantly across sectors. However, the range of activities posting employment gains suggests that some measure of improvement is now being felt widely. 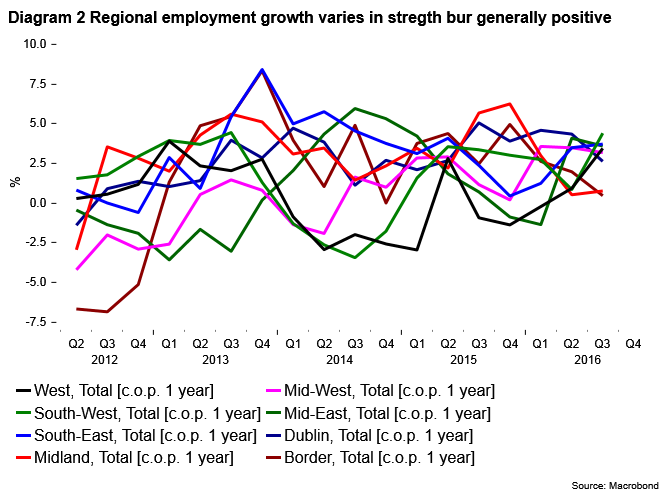 A similar broadening is indicated in the regional breakdown of the data. As diagram 2 indicates, all planning regions saw year on year job gains in the third quarter of 2016. While jobs growth in Dublin remains stronger than elsewhere (+4.3%), the range of outcomes has narrowed with areas of weakness through 2015 such as the west and mid-east regions showing a notably stronger trend of late.

There has also been some improvement in the ‘reach’ of the recovery across educational levels as diagram3 shows. This likely reflects the improvement in domestic spending and the allied pick-up in employment in areas such as construction and accommodation and food services. 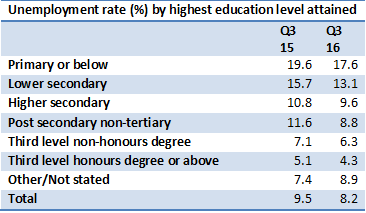 One of the most notable features of today’s report is the extent to which it reflects a strengthening recovery in female employment. As diagram 4 illustrates, the drop in employment among males was notably more severe than among females through the downturn and, subsequently, in 2013 and 2014, the recovery in male employment was notably stronger. However, in recent quarters, the majority of job gains have been for females. 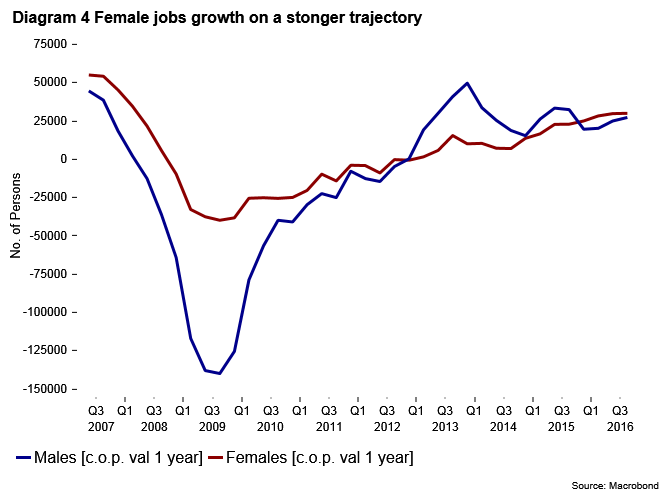 In part, this may reflect an increase in employment opportunities afforded by improving domestic spending. However, the fact that the strongest pace in female job gains was in industry as well as the fact that full-time female employment grew faster than the corresponding male figure while part-time jobs growth was stronger among males than females hints at more significant structural changes in the Irish labour market.

At the margin, the recent strength in female employment should increase the resilience of household spending power to any moderation in the pace of Irish economic growth in the coming year. Alongside other elements of the jobs report that point to a broader spread of employment gains across the Irish economy (which should be further supported by the stance of Irish fiscal policy) , it may suggest a capacity to handle what may be a more testing economic climate in the months ahead.