Sharp pick-up in employment in Q2 as economy re-opens…

...but surge in labour force and elevated unemployment suggest still much to be done

Irish jobs data for the second quarter of 2021 show a very strong but not entirely surprising rebound in numbers at work as health-related restrictions eased and the re-opening of the economy gained momentum. The details of today’s labour force data suggest;

As the diagram below illustrates, these Q2 data suggest a marked ‘catch-up’ in Ireland’s jobs performance relative to the experience of other economies. This outturn also suggests that restrictions rather than recessionary forces were the key driver of earlier weakness. 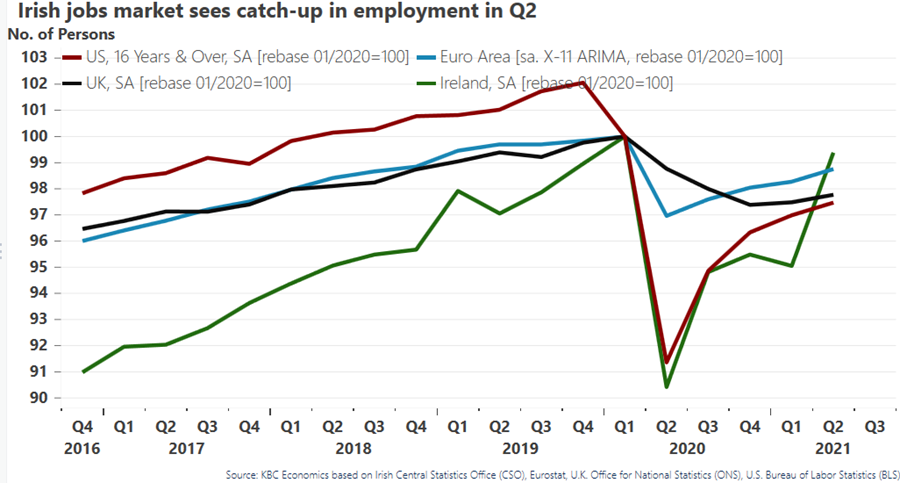 However, today’s data also serve to highlight the exceptional characteristics of the Irish economy and the particular issues posed by the pandemic. Strong demographics mean the Irish economy has to run fast in terms of job creation just to stand still. While numbers at work were 211k higher in Q2 ’21 than a year earlier, the labour force grew even faster, by 274k or an astonishing 12.1% over the same period.

This means that unemployment has also moved higher through the past year and the impact of the pandemic on the Irish jobs market has been more damaging than might be inferred from numbers at work. This is also seen in the chart below. The uplift in the Irish jobless rate of just over 2 percentage points since late 2019 is broadly similar to that of the US and markedly greater than that seen in either the UK (around 1 percentage point) or the Euro area (about 0.3 percentage points). 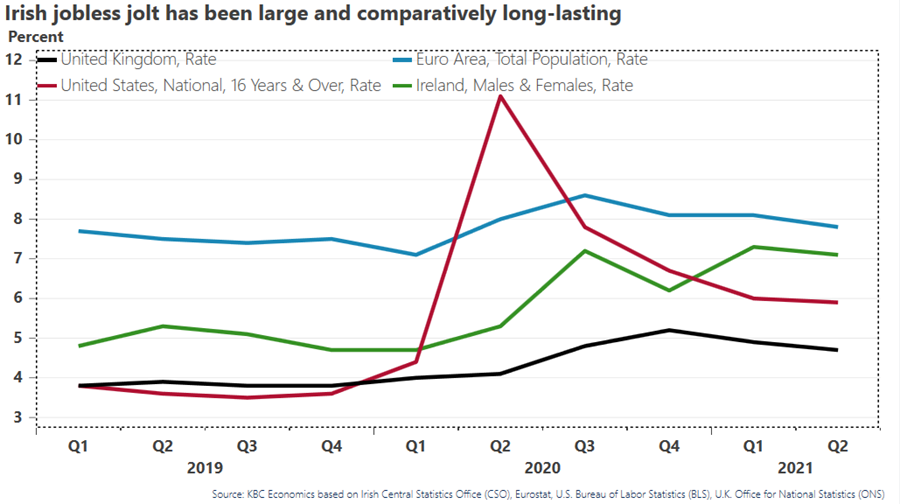 The same picture emerges from a comparison of numbers at work across various sectors of the Irish economy. While Q2 ’21 saw widespread growth in numbers at work and some notable improvements in sectors most affected by the pandemic, the diagram below indicates major variations in the current temperature of the jobs market across sectors that suggests that Covid-19 has further aggravated the tendency towards dynamic differences in Ireland’s ‘two-speed’ economy.

After today’s encouragingly strong jobs data, it remains the case that numbers at work are still 15k lower than the peak seen in Q1 2020. Given the long-lasting trend of strong population and labour force growth as well as the pick-up in unemployment, we estimate employment is now probably around 50k-60k below what might have been expected pre-pandemic.

Although some element of this shortfall may ease as the economy recovers further, a threatening offsetting influence will be the likelihood of increased difficulties for many businesses (and employees) as Government supports are wound down.

Domestic commentary has increasingly focussed of late on the need for policy to reflect the risks of overheating. In spite of an encouraging rebound in employment, today’s jobs data suggest a still relatively cool temperature both in terms of numbers at work in aggregate, signs of significant sectoral shortfalls, still elevated unemployment (a seasonally adjusted unemployment rate of 7.1% in Q2) and increasing if still low long term unemployment (2% v 1.1% a year earlier).

Significantly, the broader policy debate internationally in the past couple of years has turned to emphasise the need to run economies notably ‘hotter’ than previously to ensure activity is sufficiently robust to avoid excluding notable segments of the population from participation in the economic and social benefits of engagement in employment.

While the Q2 jobs data are very encouraging in demonstrating the resilience of the economy, the details also emphasise the risk that the rebound could leave significant numbers behind. This would argue that Budget ’22 should incorporate sector-specific measures. It could also imply an overall stance that would foster a somewhat ‘hotter’ Irish economy than some recommend to ease the path of re-absorbing workers from troubled businesses and sectors.