Job gains broadly based across sectors and regions

Unemployment notably lower than previously thought at 4.6% in April

Data consistent with pressure in areas such as housing

Irish jobs data for the first quarter of 2019 saw a large and unexpected pick-up in the rate of employment growth. These numbers suggest the Irish economy began this year with exceptional and broadly based momentum.

These numbers might imply that growth forecasts for 2019 may need to be revised upwards but the volatile nature of Irish data caution against a mechanical upgrade. More fundamentally, today’s data that show the fastest increase in the labour force in eleven years, as well as suggesting the likelihood of an acceleration in population growth, this provides some indication of the pressure on capacity in areas such as housing.

Employment in the Irish economy increased by 3.7% y/y in the first quarter of 2019, the fastest rate of increase in two years. More notably, the 81.2K increase in numbers at work in the past twelve months is the largest annual number of jobs added since the third quarter of 2007.

As the diagram below illustrates, the pace of jobs growth in the Irish economy remains notably faster than in our main trading partners but it is also significantly choppier. While the first quarter numbers should underpin expectations of very healthy Irish economic growth in 2019, a less certain global environment and strains on capacity in some areas of the Irish economy together with the ingrained volatility of Irish data caution against simply extrapolating forward today’s data into projections of a dramatic surge in Irish growth.

Even if there is no dispute that these data are indicative of a very healthy Irish economy, the stand-out nature of the jobs increase in Q1, against a backdrop of subdued business and consumer surveys as well as healthy but far from white hot tax receipts, cautions that there may be some statistical froth in the scale of increase in employment that could unwind in upcoming quarters. 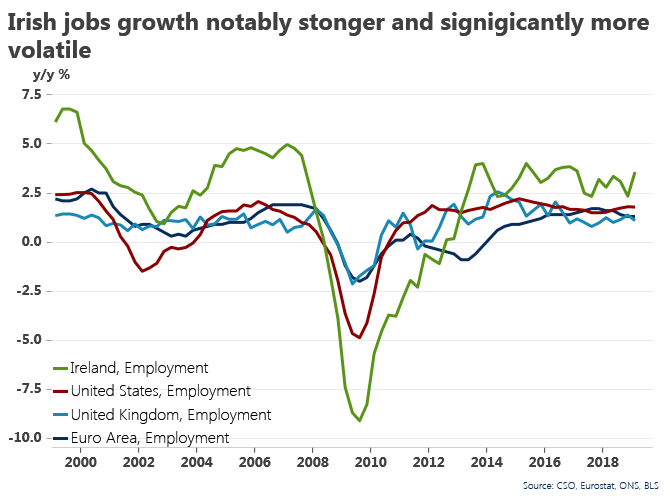 The exceptional nature of Irish jobs growth in early 2019 is even more evident from the quarterly increase from the final three months of 2018. The 1.5% q/q gain was matched by a similar increase at the end of 2017 but dwarfed the 0.6% average quarterly increase seen through 2018 and was last exceeded in late 2006.

The gains in employment both on an annual and quarterly basis were broadly based across sectors with the only notable exception being agriculture. While this primarily reflects specific pressures in the sector, it may also owe something to switches in categorisation reflecting increased take-up of increased employment in other sectors. The broad spread of job gains is also hinted at in increases in both full-time (+3.5%) and part-time employment (+4.1%) as well as a faster increase in female employment (+5.0%) than in male employment (+2.5%).

There was also a notable if surprisingly large re-balancing of the geographic basis of jobs growth with employment in Dublin easing to a 3.1% pace from 3.7% previously and jobs growth outside the capital jumping from 1.6% y/y in Q4 2108 to 3.9% in Q1 2019. Within that figure, employment growth in the Border region turned meaningfully positive (+3.3%) for the first time since Q3 2017.

The rapid increase in numbers at work in Ireland in early 2019 was facilitated by a 2.7% increase in the labour force which is roughly twice the pace seen in the previous six years and also the fastest twelve month increase since Q1 2008.This partly reflects an increase in labour force participation (where the rate increased from 61.6% at the start of 2018 to 62% at present) but likely owes more to a further step-up in inward migration.

In previous quarters, a reported moderation in jobs growth accompanied by signs of increased inward migration had led to upward revisions to Ireland’s unemployment rate. However, the exceptional pace of job gains in today’s release for the first quarter has resulted into a downward revision of previous estimates of the unemployment rate for the early months of 2019 from a 5.6% average for the first quarter to a figure of 5%. By extension, the monthly number for April previously put at 5.4% is now estimated at 4.6%, the lowest the monthly unemployment rate has been since November 2006 (also 4.6%).

The choppy nature of Irish jobs data means that today’s reported increase in employment of 3.7% y/y may somewhat overstate the underlying strength of activity and employment in the Irish economy at present but the broader picture it portrays of solid growth is not in question.

The strength of today’s jobs data is also consistent with signs of some pick-up in earnings, capacity issues in some areas of the economy and pressures in areas such as housing. It is not clear as yet whether the lack of any marked improvement thus far in broadly based earnings in response to very strong jobs markets in economies such as the US and UK will be repeated here.

Certainly, the capacity of the Irish economy to deliver jobs gains on the scale seen in early 2019 might suggest income gains are coming primarily through employment rather than wage increases. That said, the boundaries on this ’new normal’ are untested and a pick-up in wages may be delayed rather than denied.

The clear indication of more people living and working in the Irish economy also goes some way to explaining the difference between healthy aggregate readings such as retail sales growth and subdued consumer sentiment of late.  However, we will probably require at least a couple of more data points to say definitively if Irish growth might be re-accelerating rather than slowing in 2019.