Numbers at work now back to 2007 peak

Employment data for the first quarter of 2018 show momentum in the Irish jobs market remains strong. Numbers at work were 62.1k or 2.9% higher than a year earlier and the 0.7% rise on the final quarter of 2017 (which translates into an annualised increase of 2.9%) implies jobs growth has remained solid in recent months although there has been some moderation from the 3.1% y/y pace seen at the end of 2017.

For a number of reasons, we would describe the current performance of the Irish jobs market as strong rather than spectacular. The details of today’s employment figures and simultaneously released population projections also suggest to us that current progress can be sustained for some considerable time rather than painting a picture of an Irish economy running hard and fast into ‘macro’ capacity constraints. 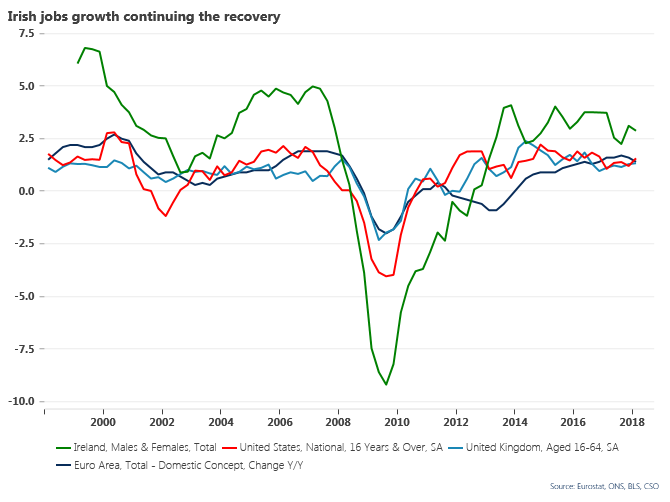 The level of employment in Ireland has now returned to that seen at the previous peak in 2017. Technically, the seasonally adjusted total of 2.2379 million is marginally above that seen in Q4 2007 (2.2373 million) but this difference is so small as to not be significant and, in any event, it could be notably changed by a future revision to seasonal adjustment factors.

Returning to employment levels last seen at the peak of the previous boom represents a significant recovery in the Irish economy but this should be seen as a continuing work in progress rather than mission accomplished as, in the interim, Ireland’s population has grown by about 10%. A mechanical increase in employment in line with population growth since 2007 would imply numbers at work would be about 235k higher than at present.

In the same vein, had the trend in Irish employment mirrored the Euro average or that of the US or UK (thereby avoiding the dramatic job losses of the downturn), numbers at work here would be some 110k to 150k higher than today.

It should also be noted that jobs growth in early 2018 was centred on Dublin (+5.4%) which accounted for 35k of the 62k increase in employment nationwide in the past twelve months while numbers at work fell marginally in the south east and were unchanged in the border region.

Jobs growth was notably more balanced on a sectoral basis with 11 out of 14 sectors reporting annual increases in numbers at work. However, the exceptions; industry (-0.5%), financial, insurance and property activities (-0.6%) and wholesale/retail (-1.3%) hint at some ‘headwinds’ to growth in certain areas.

The continuing increase in employment led to a somewhat faster than expected fall in unemployment to an estimated 5.3% in May 2018 (previously estimated at 5.8%) and down significantly from the May 2017 reading of 6.7%. Encouragingly, the drop in unemployment was concentrated in long term unemployment which fell to 2.1%, the lowest rate since late 2008.

Clearly, the drop in Irish unemployment from the early 2012 peak of 16% is remarkable but it should also be remembered that 11 of the EU28 economies had a lower unemployment rate than Ireland in April 2018 (the latest comparable data).

The sharper than expected recent decline in Irish unemployment partly reflected slower labour force growth than in the previous quarter (+1.4% y/y compared to +1.9% y/y). The slowdown in labour force growth is slightly surprising but may owe something to seasonal and weather related declines in casual working opportunities.  Our sense is that in response to increased demand for labour, migration and increased participation rates could see labour force growth strengthen in coming quarters.

With Irish jobs growth strong and unemployment falling significantly, today’s employment data might be interpreted as symptomatic of an economy at risk of overheating. However, the international and historical comparisons mentioned above together with the regional breakdown of job gains (and other evidence such as muted earnings gains) don’t suggest ‘macro’ capacity constraints are now beginning to bite.

This is not to say policy caution isn’t warranted. However, policy should also be informed by new CSO population projections that suggest the Irish economy might experience continuing strong demographic support in coming decades. In such circumstances, the priority for policy might be on how to harness strong supply potential rather than how to curb demand.

The CSO set out a number of different scenarios for Ireland’s population out to 2051 based around different possible paths for two key variables; fertility rates and migration. Our sense is that the most likely profile for fertility rates would be to see a gradual decrease in fertility from the 2016 average level of 1.8 births per woman to 1.6 by 2031 while we think the CSO variant assuming net inward migration averaging 30k per annum could even prove conservative. On this basis Ireland’s population could climb from 4.7 million at present to 5.6 million by 2031 and 6.5 million by 2051.

Using these variants (formally the M1F2 variant of CSO projections) gives the projection for Irish population growth shown in diagram 2 below. It implies that Irish population growth will average 1% per annum out to 2051,about the same as the current pace and the 30 year historic average but somewhat slower than the 1.4% pace of the past 20 years. 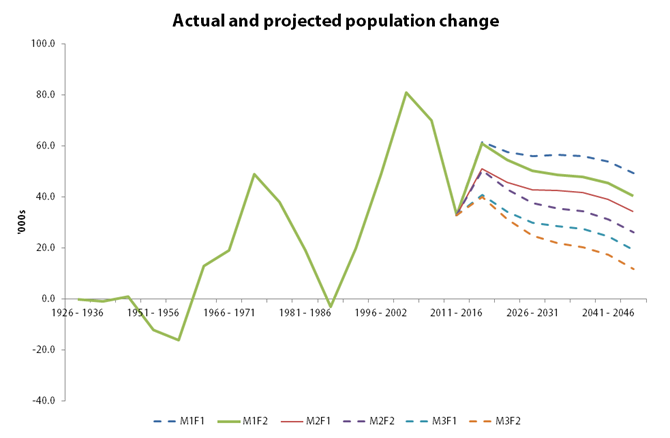 It should be noted that the projected growth in Ireland’s population is about three times as fast as population growth across the EU is at present and roughly ten times as fast as is envisaged for EU between now and 2051. So, Ireland could be facing issues around comparatively rapid population growth for the foreseeable future, implying the focus of policy should be on accommodating additional capacity rather than merely restraining demand.

The growth capacity of the Irish economy will only be modestly curbed by an ageing population in the next couple of decades. Diagram 3 below sets out the CSO’s projection for labour force growth over the period to 2031 (again on theM1F2 variant). This suggests the Irish labour force can grow at about 1.4% per annum, only marginally below the 1.7% pace seen through the past 20 years.

This implies a potential economic growth rate for Ireland in the region of 2.5 to 3% could readily be sustained for the next fifteen years or so with a little luck in terms of the global environment and a lot of care in terms of domestic policymaking. 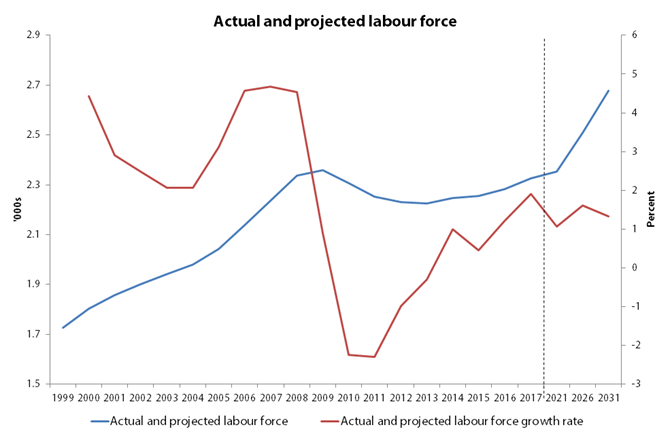 Getting the balance right in terms of the policy focus on short term priorities and long term potential will be important in a wide range of areas. This is neatly illustrated by diagram 4 which is taken directly from today’s CSO population projections. It shows that, under most variants, the share of those of working age in the population doesn’t decline markedly until after 2031.The issue is whether policies to address that subsequent decline and the broader problems of an ageing Irish population will be long-fingered in the interim. ‘In the long run, we’re all….? ‘ 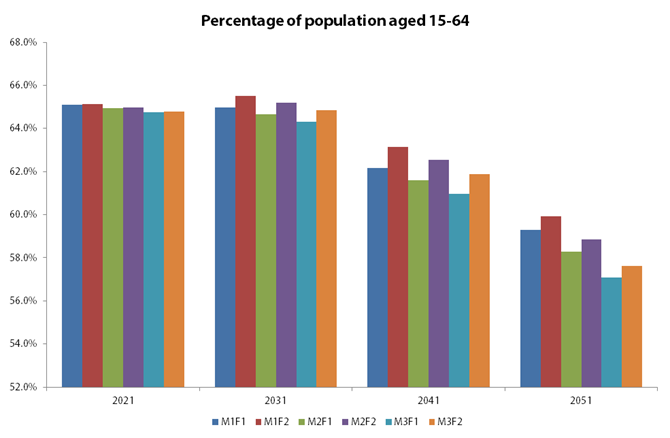