The weakness in today’s jobs market data is consistent with the impact of declining domestic spending and increased nervousness about the Euro area economic outlook in the early months of 2012.  These factors likely weighed on hiring plans.  In this environment, further job losses in industry (-4,400 or 1.2%) and construction (3,700 or -3.5%) are understandable.  A significant pullback in discretionary consumer spending after Christmas and New Year outlays likely contributed to a significant drop in employment in accommodation and food services (-4,400 or 3.8%).  Yet, employment in retail/wholesale trades rose marginally.  The education sector also reported an unexpected (+2.2%) rise.  Most other sectors also posted quarter on quarter declines in numbers at work suggesting widespread weakness in Ireland’s jobs market in early 2012.

While it is not altogether surprising that numbers at work fell in early 2012, today’s release is somewhat disappointing given that there was a small increase in numbers at work (+11,000) in the previous quarter.  Today’s data are also somewhat weaker than might have been expected given a somewhat more encouraging trend suggested by live register data, income tax receipts and a range of surveys for the same period.  There are also some slightly unsettling discrepancies between changes in the seasonally adjusted totals for employment and in its various components whether these are measured in terms of the breakdown by gender, by full-time/part-time work or by sector of the workforce.  This suggests that the signal to noise ratio in these data in terms of the precise change in numbers at work from quarter to quarter may not be quite as high as we might like. 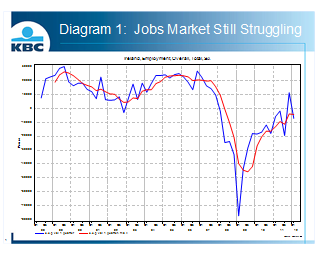 The message coming from a comparison of today’s seasonally adjusted data and a smoothed 4 quarter moving average (see Diagram 1) is that Irish employment was still edging slightly lower in early 2012, albeit at a markedly slower pace than in previous years.  It is still possible that numbers at work will stabilise towards the end of 2012 if the global economy stabilises.  That said, the impact of redundancies in the public and financial sectors mean the next quarter or two could show further weakness.

The most disturbing aspect of today’s employment data is a further rise in long-term unemployment.  In the first three months of 2012, the number of long-term unemployed stood at 187,000 or 8.9% of the workforce compared to just 26,000 or 1.2% of the labour force in the first quarter of 2007.  This change reflects the length and severity of the downturn.  A sharp and prolonged deterioration in economic conditions produced a cumulative drop in numbers at work of 340,000 in the Irish economy between the final quarter of 2007 and the first quarter of 2012.  Such conditions meant the prospects of re-employment for those laid-off remained poor.  Structural influences on unemployment such as the cumulative 61% drop in numbers working in the construction sector or the comparatively high unemployment rates in particular areas such as the Midlands (18.1%) and the South-East (19.7%) aggravate this problem further.  As a result, even a modest recovery that leads to broad stabilisation in employment will see numbers out of work for long periods continue to grind higher.  This implies it will take dramatically stronger growth or exceptional activation measures to reduce long-term unemployment in coming years.