Irish inflation resumed its upward trend in February. Consumer prices increased 5.6% y/y compared to an increase of 5.0% in January. The February reading is the highest in almost 21 years (previously higher in April 2001 +5.7%). On the harmonised measure used to compare inflation across the EU, Irish inflation hit 5.7% in February, matching a twenty one year high in this metric seen in December.

With Irish inflation expected to move higher in coming months amid a broadening of price pressures, some further policy action in the shape of offsetting fiscal measures is likely to be needed.

Increased inflation; the usual suspects and some others pushing prices higher

Although the diagram below suggests the upward trend in Irish inflation through the past year is closely linked to higher energy costs, in terms of the uplift in the annual inflation rate between January and February, a relatively small element (around 0.1 percentage points) is due to a further acceleration in energy costs (+29.9% y/y v 28.9% in January).

A broadly similar contribution came from a continuing pick-up in food prices (+3.0% v 2.1%) that included a sharp 1.5% monthly rise in bread prices that brought the annual increase for this item to 8.0% from 4.2% in January. 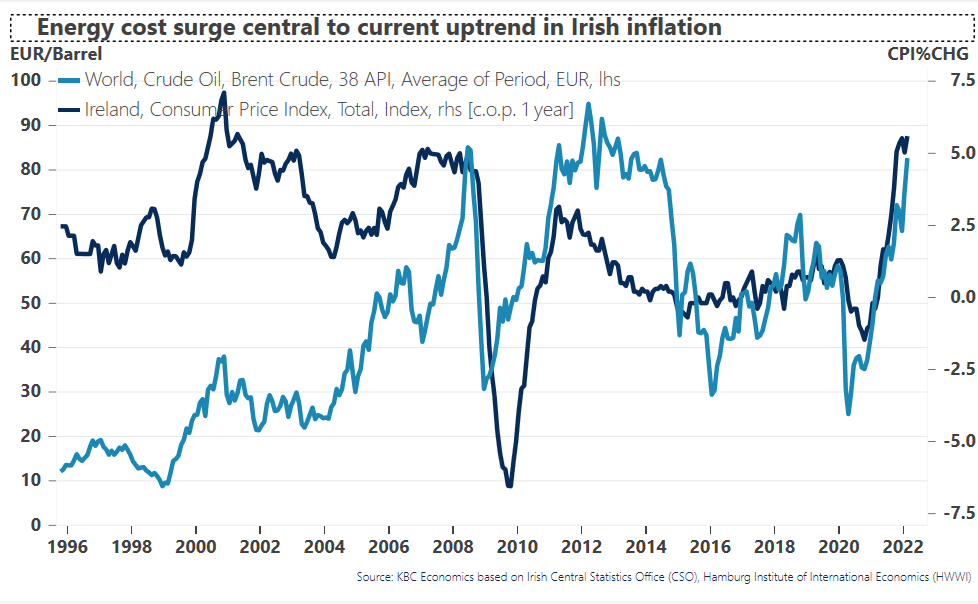 Irish inflation looks set to move above 6% in coming months. The cut in excise duties on diesel and petrol announced yesterday will shave between 0.3 and 0.4 percentage points off the headline rate but this will restrain rather than reverse the current upward momentum.

While some easing in Irish inflation should be seen through the summer, any pull-back now seems likely to be relatively modest in the near term at least, as deep-rooted problems in relation to energy prices and growing pressures on food prices are likely to persist and threaten to spill over into significant and more broadly based increases in living and business costs.

Although the degree of volatility in commodity prices means that the margin of error around numerical forecasts of Irish inflation is very wide, the risks in terms of the outturn for 2022 seem to be heavily skewed to the upside.

The crisis in Ukraine has intensified upward pressure on global oil and natural gas prices and, in turn caused spikes in  the cost of heating and transport for household and business. These second round effects are likely to worsen further in the near term as businesses increasingly factor in larger and longer-lasting cost pressures. With food prices also set to pick up notably, Irish inflation could be in the region of 6% on average through 2022.

What can be done?

The inflation picture has changed significantly through the past year. Since last summer, we have moved from what seemed to be a temporary spike in prices, largely reflecting a post-pandemic rebound in energy prices, to the reality of a sustained but probably contained rise in inflation in Ireland and elsewhere. More recently, the picture has shifted again to the real threat of a damaging spiral of higher prices and wages.

Although a notably more uncertain global economic environment could temper price and wage  growth somewhat, this remains only a potential channel of impact at this point and could take some time to be felt. In contrast, increased price pressures related to the situation in Ukraine are already forcefully visible in areas such as fuel costs and come against a background of elevated concern regarding inflation in Ireland (and elsewhere) prior to the Russian invasion.

While the direct fallout from the Russian invasion of Ukraine on Irish economic activity is modest because of limited direct economic links to the region, the wider inflationary consequences of the conflict in Ukraine represent a material negative shock to the Irish economy. As a result, a winter of discontent in relation to living costs may turn to a spring of sustained and more substantial difficulties.

What the Government should do in these circumstances is clear,  precisely how to do it and how much to do are altogether trickier. The Irish government can’t and shouldn’t try to insulate the Irish economy from a global shock of this sort but it can and should cushion the damage particularly on those hardest hit by the blow to spending power. Some steps have already been taken but more is likely to be needed.

In many respects, the fiscal policy playbook has been rewritten by Covid-19. A more ‘activist’ supportive approach is now seen as appropriate, replacing the previous knee-jerk ‘austerity’ mindset but with this change comes a need for measured and managed adjustments to budget settings as opposed to a funding free-for-all.

Fiscal policy couldn’t and shouldn’t respond to all economic bumps. However, in scale and substance, the current threat to living standards posed by outsized price pressures would seem to justify further considered action.

Some sense of the extent to which inflation has now broken away from the previous subdued trend is suggested in diagram 2 which compares the nominal and inflation-adjusted trends in economy wide household incomes over the past decade. Only in the past year has a marked gap emerged between the two and current forecasts would suggest, inflation adjusted household incomes could stagnate or even fall slightly in 2023. 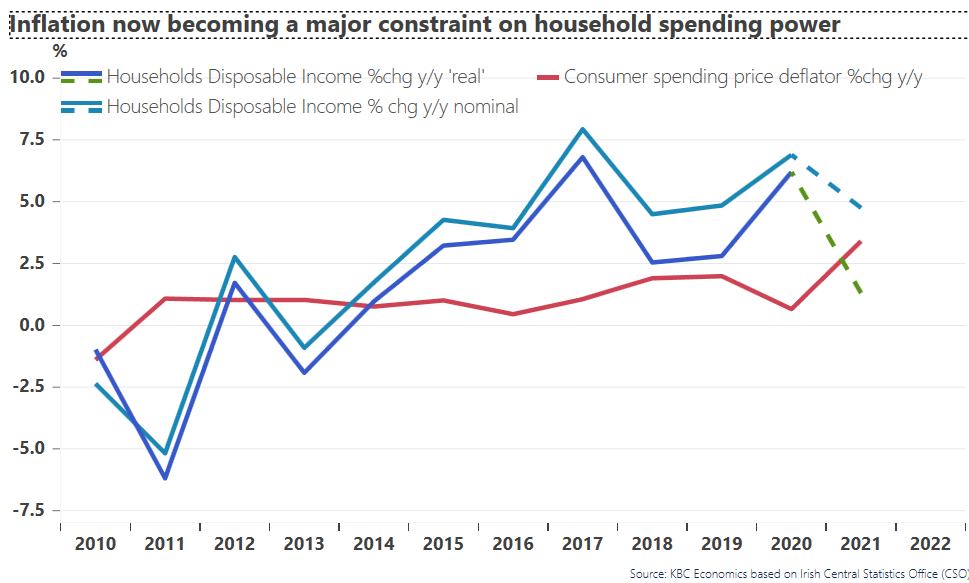 In the near term, there may be some hopes for EU driven support measures, However, the Irish government may need to think in terms of a ‘mini-budget in coming months focused on supporting those on lowest incomes who are most vulnerable to rapid increases in the cost of basic necessities. This would need to concentrate on delivering a modest boost to welfare payments while providing some further fiscal offset to the hit to household incomes in the form of excise reductions and further energy related ‘subsidy’ payments.

More generalised measures such as reductions in VAT rates are likely to be inefficient and regressive in their impact while direct tax measures can be more accurately framed in the context of Budget ’23 although some promises in relation to indexation may need to be made much earlier. The approach of improving weather in coming months may ease some of the more severe heating-related pressures and allow a more informed position to be taken in Budget ’23.

While the ‘fiscal space’ to deliver a package of supports is underpinned both by the positive trend in the public finances and the boost inflation will deliver to various tax headings, framing a package that delivers meaningful support but doesn’t materially worsen the budgetary outlook will entail striking a careful balance that may disappoint some.