Irish inflation increases sharply in March; some bad news, some worse news and some good news

Irish inflation continued to push higher in March. Consumer prices were 6.7% higher than a year earlier, markedly faster than 5.6% increase seen in February and the fastest pace of increase since November 2000.

It is worth emphasising that the current bout of price pressures is entirely an environment of pain.In the previous bouts of rapid inflation in the early and mid 2000’s, there was also an element of ‘party’ as booms in domestic spending were an important contributory element. There is no significant domestic demand element to current inflation and this is important in terms of calibrating the right shape and scale of policy response. 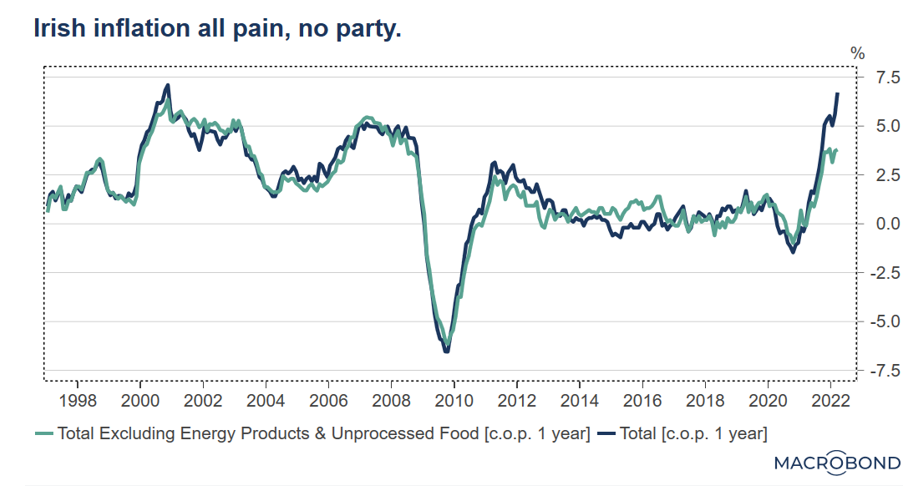 Some sense of the intensity of current price pressures is indicated by the month-on-month increase in consumer prices between February and March which at 1.9% was the fastest on record (monthly inflation data go back to 1997). This suggests that momentum in inflation is still building and, with recently announced increases in electricity and gas prices still to be reflected in these data, this suggests inflation readings in the region of 8% in the next few months.

As has been the case for some time, the key culprit in the March inflation uplift was energy costs. Indeed, six of the twelve main commodity headings in the basket of goods and services used to measure Irish consumer prices showed lower year-on-year inflation in March than in February, an outturn that suggests price pressures are still concentrated in a small but significant  number of areas.

A record 18.7% monthly increase in energy costs means they are 43.8% higher than in March 2021. This scale of increase is without comparison through the past forty years as the diagram below illustrates. While there were significant monthly increases in motor fuel (+13.7% m/m to leave them 40.4% higher than a year ago), the main push came from a 58.5% m/m rise in home heating oil that translates to a staggering 126.6% y/y increase. In addition, higher energy costs undoubtedly drove an 18.2% m/m jump in air fares that brought the annual rate to 69.2% from 42.3% in February. 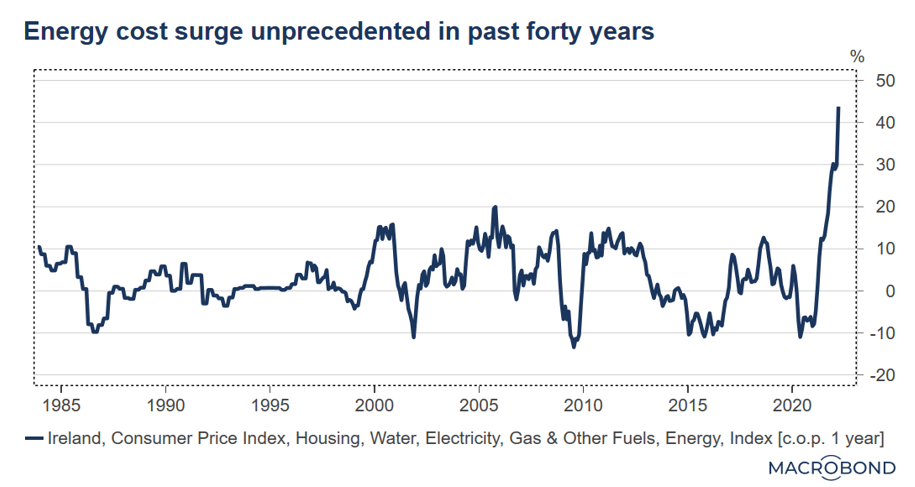 A significant domestic driver of inflation is housing rents but the year on year increase in this area remained at 9.2% in March. Food price inflation edged up to 3.1% from 3.0%. While there were significant price hikes for flour and pasta, the CSO food price measure is not yet reflecting the sharp increase seen in input prices. However, accommodation costs increased 5.5% m/m to stand 13.7% above their March 2021 level while bar and restaurant prices rose  1.6% m/m to stand 2.6% higher than a year earlier.

Unfortunately, Inflation looks set to climb higher in coming months. Where precisely it may peak is almost impossible to say given current uncertainties around energy costs but, on current trends, inflation may hit 8% by summer. What seems to be becoming clearer is that current price pressures also seem set to last longer  than previously thought.

It had been  expected that inflation would ease back markedly later in 2022 on some pull-back in oil prices. However, war in Ukraine means energy costs are now likely to remain elevated for some time. Food prices are under marked upward pressure because of higher input costs and war-related supply disruptions. The larger and longer energy driven surge in inflation is also spilling over into broader cost pressures across a range of other areas.

For these reasons, only a modest retracement of current upward momentum now seems likely to occur later in 2022. As a result, we have revised up our forecast for average inflation for 2022 to 7% from 6% previously and now see inflation falling to a still troubling 4% in 2023 (previously 3.5%).

The sense that inflation problems may be much larger and longer-lasting is not unique to Ireland. As a result, an important and emerging consequence of rapid inflation globally is a much earlier and more substantial turn in the interest rate cycle. It is now widely envisaged that Central Banks will respond forcefully and fairly quickly to the persistence of way above target inflation.

The diagram below shows financial market expectations for the level of short-dated interest rates at the end of 2022, 2023 and 2025, Markets now take the view that the ECB could raise rates three times by the end of this year and by a similar amount next year. 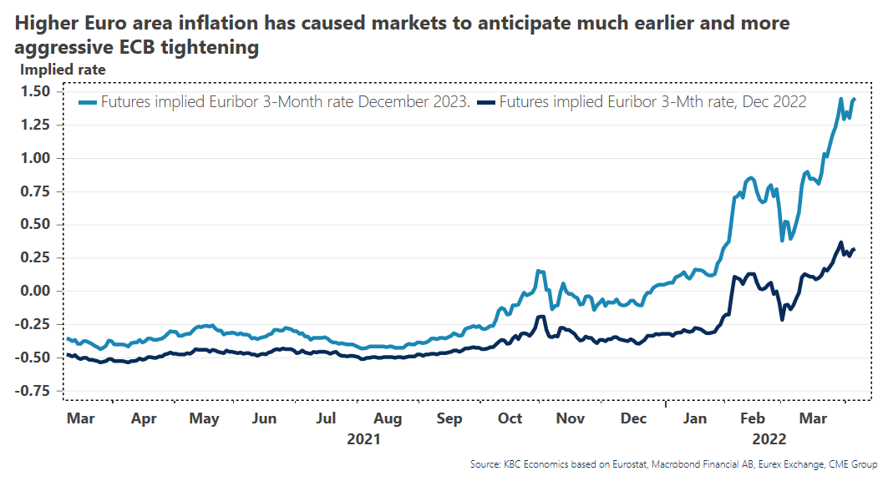 The change in market thinking is largely a response to the unexpected strength and length of Euro area price pressures but it also reflects subtle but significant changes in the tone of comments by ECB officials. In this context, remarks earlier this week by influential ECB executive board member,  Isabel Schnabel, clearly warn of looming changes to ECB policy.

However, Ms Schnabel also suggested that there should be some offsetting role for fiscal policy when she said ‘ If, however, the shock is expected to be more persistent and to affect inflation over the medium term, monetary policy needs to act in order to remain faithful to its primary objective of price stability. Then, fiscal policy should ideally buffer the effects on private demand.’

(‘Managing policy trade-offs’-Speech by Isabel Schnabel, Member of the Executive Board of the ECB, at a workshop organised by the European House – Ambrosetti on “The Agenda for Europe: Macroeconomic and Structural Policy Challenges”  2 April 2022).

We previously argued that Irish fiscal policy could not and should not attempt to offset the impact of higher energy costs on the Irish economy but that it should act to soften the impact on those most affected and least capable of handling the hit to living and business costs.

This reflected the earlier view that the adverse impact would be smaller and short-lived. In circumstances where the inflationary damage is larger and lasts longer, the appropriate fiscal response is slightly different because, as the ECB comments above suggest, some element of offset to demand destruction caused by higher costs and tighter monetary policy may be appropriate.

It is important to emphasise that Ireland has significant fiscal capacity to implement targeted support measures. Indeed, while the main impact of rising energy costs is to transfer resources out of the Irish economy to energy producers, within the economy there is a mechanical transfer of resources from households and businesses to the Government in the form of inflation-boosted taxes.

Although some exceptional factors were at play, exchequer returns for the first quarter suggest some possibility that the Irish public finances could move into a modest surplus in 2022, even when allowance is made for support measures already introduced and some slowing in tax growth. If momentum in domestic economic activity remains reasonably positive through the remainder of the year, this would translate into an outturn perhaps as much as €9-10bn better than envisaged in the Budget ’22 forecast.

In turn, this suggests scope for a two-pronged approach whereby some form of mini-budget in coming months provides more ‘alleviating’ measures while the Budget 23 package to be presented in October will offer an opportunity to provide more focussed anti-inflation initiatives.