The Past Ain’t (Exactly) What It Used To Be

The table above sets out current price trend in Irish housing prices as measured by a new Irish Residential House Price Index which has been published for the first time by the Central Statistics Office (CSO) today. For comparison purposes, the final column of the table above shows the cumulative change from the 2007 peak to the present as measured by the previous index.

The new index incorporates revisions back to 2010. The CSO has made only marginal changes to the previous measure for the years from 2005 to 2010 and replaced the old index with the new one for the later period. As the diagram below illustrates, clear but still reasonably moderate changes are evident for the period between 2010 and 2016 as a whole.

In the context of dramatic swings in Irish house prices through the last ten years, it should be emphasised that there are no major differences between the old and new price measures at the aggregate level. However, the new index shows a somewhat larger drop between 2010 and the low point for Irish housing prices in 2013 followed by a somewhat faster subsequent recovery. 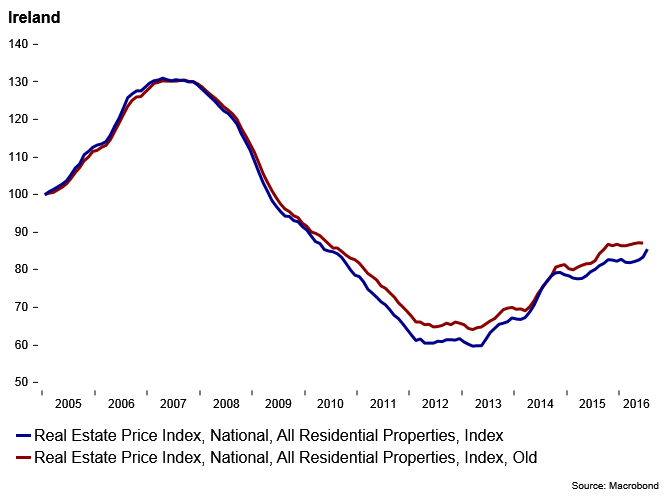 The new index suggests a slightly stronger performance in Dublin housing prices relative to those in the rest of Ireland than shown by the previous measure. For Dublin housing prices, larger recorded movements in both directions are broadly offsetting in the new index. As a result, the new index shows Dublin house prices down 35.3% from their 2007 peak, a very similar outturn to that suggested by the previous index.  However, outside of Dublin a notably larger earlier decline has not been fully offset by a stronger rebound than previously envisaged. Hence, prices outside Dublin are now about 6% further below the 2007 peak than previously envisaged. For the country as a whole, housing prices are about 2% lower relative to the peak than the previous index had suggested. 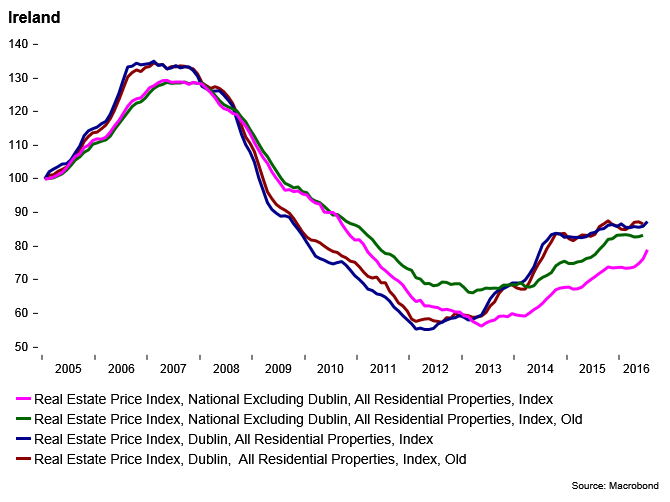 The new price data also suggest the current momentum in house prices outside the capital is somewhat faster than previously indicated while prices in Dublin are rising at a slightly more modest pace.  The new data also suggest that the twelve month rate of increase has picked up both in Dublin and elsewhere of late, implying a strengthening of market momentum through the summer months, a slightly different picture than suggested previously. We would still expect to see some moderation in the measure twelve month increases in coming months reflecting the strong performance of the new series through the latter stages of 2015. 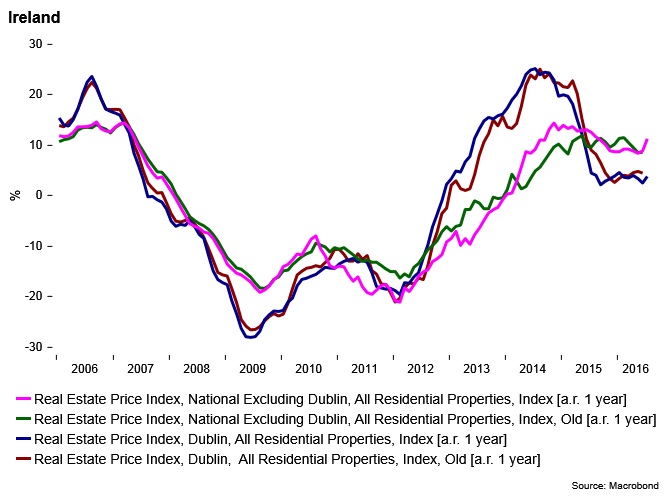 What’s Different About the New Index And Does It Matter?

The main difference in today’s new housing price measure from the previous indicator is that the new index includes purchases funded by cash whereas the previous index only included purchases funded with the use of a mortgage. There are also some changes in the statistical approaches used in calculating prices in the new model. The new index also provides a notably more detailed geographic breakdown of price trends.

Some Concerns May Be Warranted

In principle, the increase in the number of transactions on which the new housing price index is based should result in a more accurate measure of the ‘average’ Irish house price. In recent years, cash funded transactions have averaged about half of all residential property purchases. However, the nature of the cash purchase is often quite distinct from the mortgage funded purchase.

In some instances, cash purchases may reflect ‘distressed’ or quick sales or they may relate to transactions in respect of properties with issues that might cause problems in terms of mortgage approval. It is also likely to be the case that cash purchases will be more commonly associated with purchases by investors or overseas buyers rather than most residential homebuyers.

In some instances, opportunistic considerations may be more prevalent in some markets outside Dublin where less liquid market conditions are more likely to prevail. Consequently, this may explain some of the weakening in the new measure of house prices outside Dublin relative to the old index.

While these issues are unlikely to produce major variations in outcomes, it might be suggested that the current index is more likely to be representative of pricing conditions from the perspective of the average seller rather than from those seeking to purchase a home of their own.

Two further technical concerns arise in relation to the new index that could have the potential to weaken the signal to noise ratio in these data. These issues may make it even more difficult to identify emerging patterns in the monthly house price data.

First of all, the new source data come from Stamp Duty returns supplied by the Revenue Commissioners. As a result, the CSO note that ‘only a fraction of the transactions executed in a given month are available for index compilation the following month. ‘ For this reason, the new series will be provisional  and the initial estimate for any given month  will be liable to possibly significant revision in the two following monthly releases.

A further issue arises in regard to the means used to handle potentially excessive random monthly fluctuations in the house price index. The new measure also moves away from the previous practice of using a three month moving average to smooth what can be significant volatility in these data on a monthly basis. Instead, the new release will use an elaborate statistical procedure–Holt-Winters double exponential smoothing–to smooth the monthly results.

The technical paper accompanying the switch to the new housing price index today appears to suggest that the raw monthly price change price produced by the source data may only contribute about 50% of the variation seen in the number published by the CSO while the model based smoothing factor contributes a broadly similar amount to the figure that is released.

It has to be emphasised that statistical smoothing techniques are a long established method of dealing with volatility in economic data. However, it is not entirely clear that Irish monthly house price data are likely to exhibit the sort of stable trends that would readily lend themselves to this approach in preference to an altogether cruder three month moving average adjustment.

And Some New Insights Are Welcome

Alongside these concerns, we should also note the potential benefits of a significantly increased amount of information on the Irish housing market on a geographic basis, entailing separate series for the four Dublin local authorities and the Border, Midland, West, Mid-East, Mid-West, South East and South West regions. In addition to price data, information will be available on the volume of transactions which, in turn, generates ‘average’ price measures on a regional basis. As the table below indicates, there is a notable variation in average housing prices and in the rate of change in those prices at the county level. 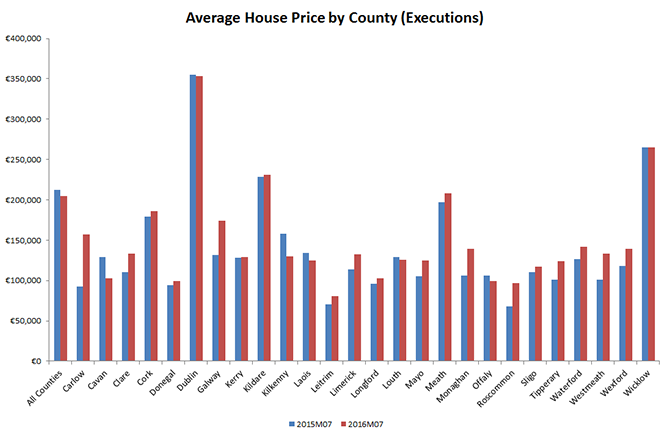