Irish residential property prices rose a solid 1.6% in August which, following a robust monthly increase in July (+2.5%) and a respectable increase in June (+1.0%), translates into the strongest three month pace of growth in Irish house prices in two years (equivalent to an annualised rate of increase of 22.5% over this period) . 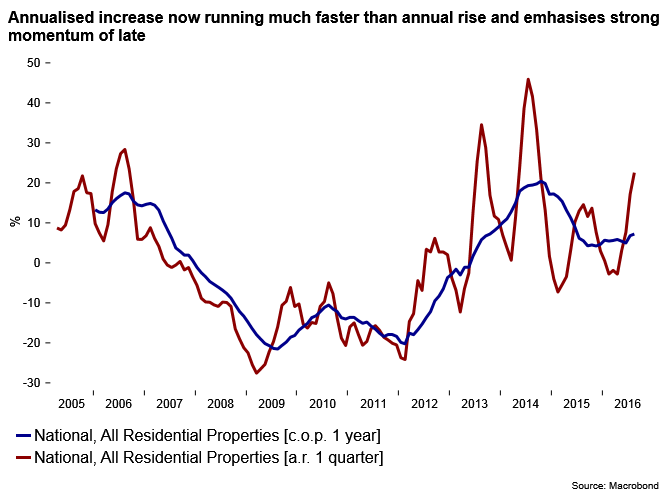 Strong monthly increases of late mean there has also been a modest pick-up in the annual rate of property price inflation which climbed to 7.2 % in August from 6.7% in July. A comparison of this annual rate with the three-month annualised rate mentioned above is shown in diagram 1 and emphasises the degree of momentum in house prices of late.

The pick-up in house prices of late is most notable outside Dublin and has been broadly based across the main regions.  As diagram 2 shows, the trend in house prices (depicted by the level of prices rather than the rate of change) has been one of consistent increases for the past couple of years across the country even if the pace of increase has varied notably between regions. 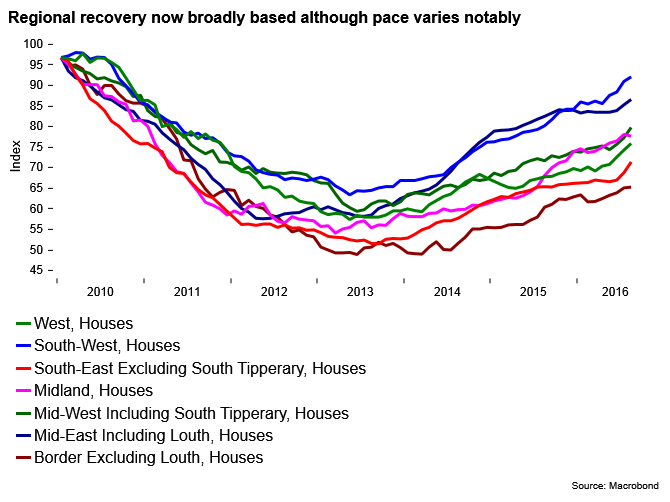 There has also been some renewed vigour in the prices of property in Dublin in the past three months, most notably in the City itself and South Dublin. As diagram 3 indicates, there was some element of stabilisation in house price levels in the four local authority regions within the capital through 2015 and the beginning of 2016 but there are tentative signs in more recent data of a renewed pick up in Dublin prices through the late spring and summer. 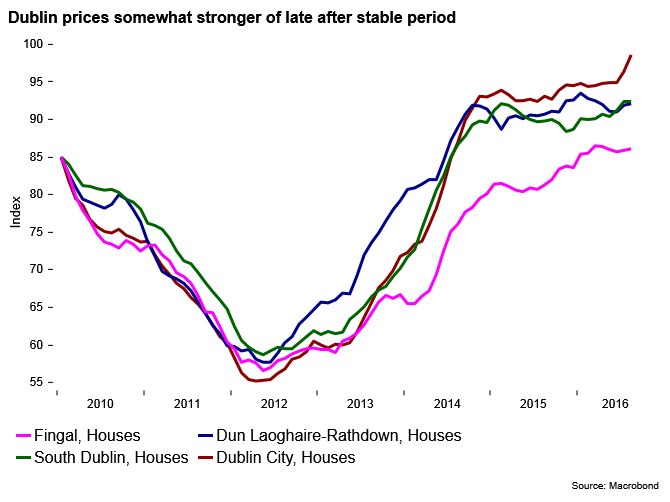 We can’t offer a definitive judgement at this point as to whether the recent monthly behaviour of house prices hints at a persistently stronger trajectory rather than the gradual slowdown in inflation we had envisaged. As the CSO’s new house price index is a relatively recent development, there is some possibility that the reported acceleration in house prices of late might be statistical in nature rather than reflecting an underlying change in conditions affecting house prices. While there is some possibility that final figures that will be available in a couple of months’ time would imply a somewhat softer trajectory of late, a couple of factors would tend to downplay the possibility that the recent pick-up in these numbers is entirely statistical ‘noise’.

First of all, the statistical technique that the CSO now applies to ‘smoothe’ the new series (Holt-Winters double exponential smoothing--see our discussion of this process in last month's comment on house prices) might, if anything, be expected to act in a way that would understate a pick-up in monthly changes in house prices as it places a significant weight on the underlying trend as well as the raw monthly price movement in arriving at the reported monthly change.

Second, we applied a seasonal correction to the data to see if recent monthly increases were purely a reflection of normal seasonal strength. As diagram 4 indicates, some element of recent monthly changes does seem to reflect a recurrent seasonal pattern. However, even allowing for this, there is still a clear pick-up in the trend in the seasonally adjusted data in recent months. At the margin, the August data point towards a slight moderation but the broad improvement in prices remains intact. 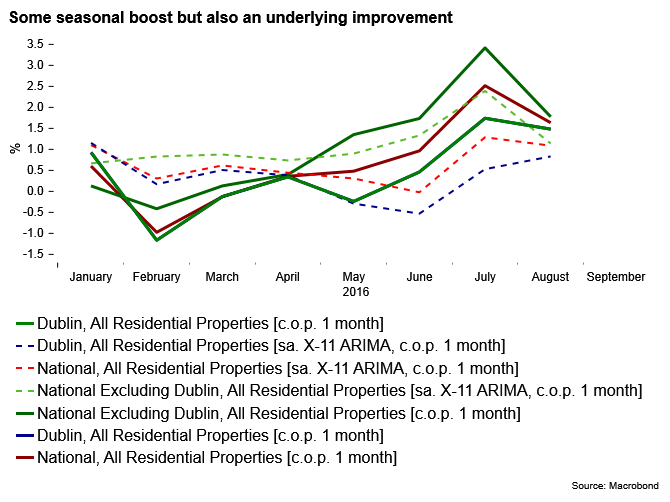 It is generally agreed that new housing supply has shown no marked pick-up of late while our recent homebuyer survey argues that the influence of pent-up demand on current conditions may be significantly underestimated. In these circumstances, additional demand may be emerging at a faster rate than incremental supply and sustaining a faster rate of increase in Irish house prices than we previously expected.

Another consideration that might suggest renewed momentum in Irish house prices of late is that the market may now have adjusted in a manner that has largely absorbed the impact of Central Bank lending constraints.  This would be consistent with the pattern seen in Dublin house prices in diagram 3 above. It would also be consistent with the assessment of the nature of the impact of macro-prudential rules depicted in diagram 5 below which comes from a recent IMF study (IMF WP 15/288). The diagram suggests the imposition of such rules have an immediately larger impact than changes in interest rates but that this impact is less longed lived than the effects of monetary policy changes that can be tweaked more readily to changing economic conditions. 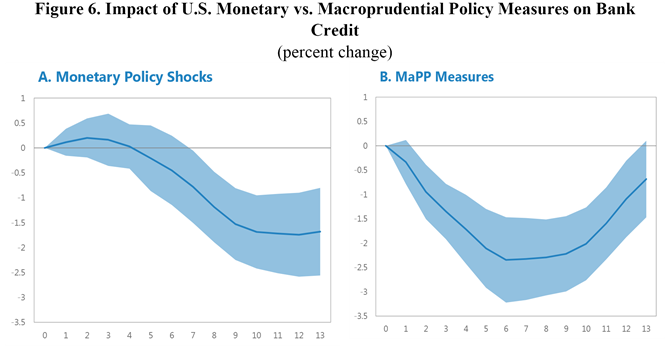 In summary, today’s CSO house price data suggest the current momentum of the market may be somewhat stronger that we previously envisaged but it may take a couple more data points to establish how marked or how long-lasting this outperformance might be.  Uncertainty about the likely impact of Brexit on the Irish economy may act as an important constraining influence on Irish house price inflation in the year ahead but robust demand and the influence from recent Budget 2017 measures to support first time buyers seem set to offer significant support to property prices.

The details of today's CSO release show that, taking the latest three-months with the same period of 2015, the average price paid by first-time buyers of new increased by 15.8%, more than twice the pace of increase for Irish house prices overall. This suggests demand in this segment is extremely strong relative to current supply capacity and Budget measures to boost it further may underpin inflation rather than producing the desired increase in transactions.