Irish house prices are softening but not slumping

Although Irish house prices have softened marginally of late, there is no sign of a slide on the scale comparable with the decline in most Irish economic indicators in the wake of Covid-19. Official data suggest Irish residential property prices were 0.6% lower in August than a year earlier, in line with the drop in July (downwardly revised from the preliminary reading of -0.5%).

As the diagram below indicates, the August house price data represent a continuation of an orderly easing in house price inflation that has been in train since the Spring of 2018. There is little evidence thus far of any marked Covid-related fallout on Irish residential property values. Although the diagram suggests a softer tone to Dublin property prices in recent months, this merely returns the price trend in the capital to that seen over the turn of the year before a short-lived bounce in the early months. 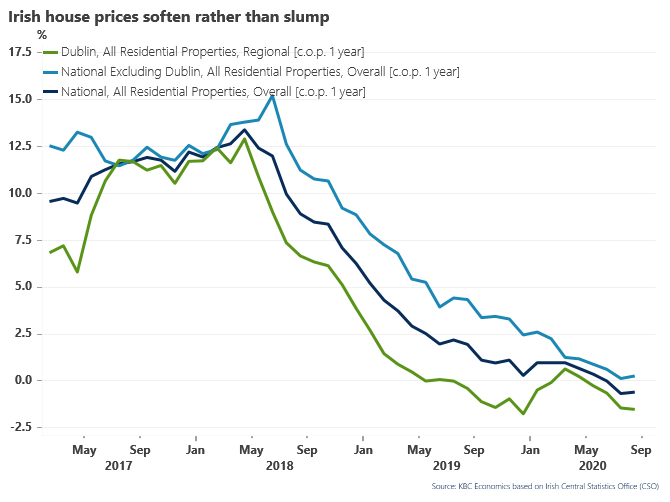 It remains the case that Dublin price trends overall are softer than in the rest of the country with prices in the capital registering a 1.5% decline y/y in August compared to a rise of 0.3% y/y outside the capital. However, variations in local demand and supply conditions continue to exert a significant influence on pricing as reflected in the contrast between a rise of 1.7% y/y in Fingal house prices and a drop of 3.4% y/y in the city centre or the variance between the 2.7% drop in house prices in border counties and the 5.2% y/y gain in the South-West. Again, these differences signal no overwhelming ’macro’ impact from the pandemic.

Residential property prices nationally were 0.3% higher in August than in July which itself saw a 0.2% monthly gain from June. These monthly increases reflect normal seasonal patterns and emphasise the limited nature of Coronavirus impacts on values thus far.

In contrast, the pandemic has had a severe impact on activity in the property market; the volume of market transactions by household purchasers was down 40.2% y/y in August, very similar to the 40.7% decline recorded in July and broadly comparable to the scale of drop seen since May. In this context, sales of new properties have fallen somewhat less than sales of existing properties possibly reflecting concerns about a potential pull-back in the supply of new housing output later in the year.

In turn, this has meant that the recent trend in new home prices appears to be markedly stronger than that in existing prices. In August, the average new home price was 2.7% higher y/y while the median new price was 0.8% down, implying some purchases of notably more expensive properties. In contrast, the average price of an existing property bought by a household buyer in August was 6.2% less than a year earlier while the median price was down 4.2%.

As new supply returns to a stronger trend and longer-lasting negative effects on jobs and incomes crystallise, we think some further softening in house prices is likely. However, Government support actions and the evident release of pent-up demand for housing of late mean any weakness is likely to be notably more contained than previously feared.