8.6% annual increase in July is the fastest in three years

1.7% monthly increase in July is the fastest in four years

Affordability strains, panic buying and increased working from home may all be playing some role in wide variations in intensity of current price pressures

The current momentum in house prices is exceptional with the month-on-month rise in July of 1.7% the fastest in four years (July 2017 +2.5%). The current intensity of price increase, allied to comparatively weak readings a year ago, means Irish house price inflation looks set to climb further in coming months as the diagram below suggests. 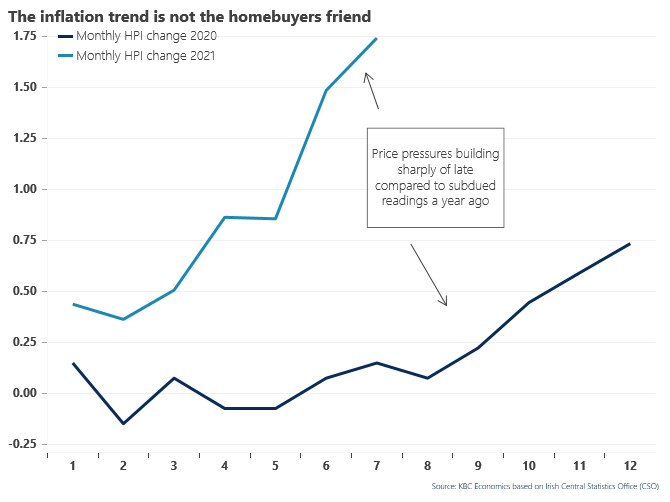 There is universal agreement that the major logjam in the Irish property market is inadequate supply.  However, recent months have seen a return to new construction and some easing in health-related restrictions on viewings meaning there is little indication of a near-term worsening of supply conditions.

Home sales to household buyers are still 11.4% below the level seen in July 2019 according to the preliminary estimates but they were still broadly flat for the first seven months compared to 2019. So, the market has gone some distance towards 'normalising'  and sales for July 2021 sales were up a staggering 49.2% compared to July 2020. This implies that much of the impetus to accelerating house price inflation may be coming from a further strengthening of demand of late.

The current upswing in demand pressures appears broadly based reflecting a range of drivers. First of all, Irish economic conditions generally have shown far greater resilience to the pandemic than expected and notable positive momentum in early 2021. Second, financial conditions remain supportive with borrowing costs predicted to remain relatively low for the foreseeable future. Third, as we previously noted current demand is markedly boosted by a persistent shortfall in housing market activity through most of the past decade that has left significant numbers in housing unsuited to their current needs.

Two additional factors whose influence is difficult to disentangle may be adding to pressures on the housing market at present. Such pressures are highlighted in the diagram below. 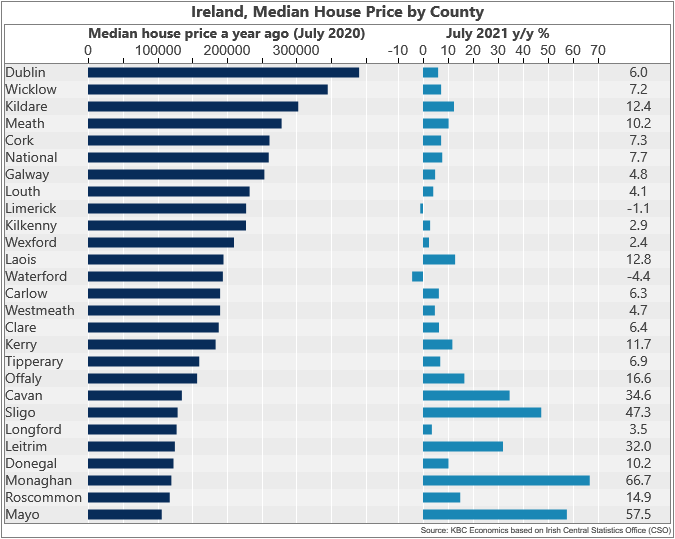 The first is the possibility that some element of panic buying may be setting in as rapidly rising house price inflation feeds a view that prices are set to rise even further in the future. As a result, previously ‘latent’ demand is activated. In circumstances of  limited supply and affordability strains, this would be expected to translate into a broadening of price pressures geographically.

Another factor acting in the same direction would be the expectation of a more permanent trend towards working from home.This would act towards a structural re-balancing of prices geographically. As the diagram above suggests, there has been a clearly faster pace of price increase in previously lower priced parts of the country through the past year.

To the extent, differentials in price increases reflect increased working from home this likely represents a more efficient use of Ireland’s housing stock and, as such, is an encouraging development. To the extent that it may reflect a desire to ‘get on the property ladder’ as quickly as possible, it may be more threatening.

Both the details of the July house price data and the degree of acceleration in the headline figures  point towards substantial difficulties in the functioning of Ireland’s housing market. They also emphasise the increasing need to build confidence supply will increase markedly not least to calm demand. This suggests translating’ Housing for All’ from plan to properties is becoming even more urgent.