Irish house price inflation bounced higher in January reflecting an easing in near term uncertainty around Brexit as well as the strong momentum in employment and income growth in the Irish economy through late 2019.

Downward pressure on house price inflation is likely to re-emerge through the first half of 2020 as the impact of the coronavirus and to a lesser extent the possibility of domestic initiatives on property by the next government weigh on homebuyers.

Irish residential property price inflation increased to 1.8% y/y in January from a downwardly revised rate of 0.5% in December (initially estimated at +0.9%). This is the most significant pick-up in the annual rate since the near term peak of 13.3% was recorded in April 2019.

Our judgement is that the degree of improvement in January may be primarily a reflection of an easing in Brexit related uncertainty. As the diagram below indicates, an even larger bounce in property price inflation has been seen in the UK of late. 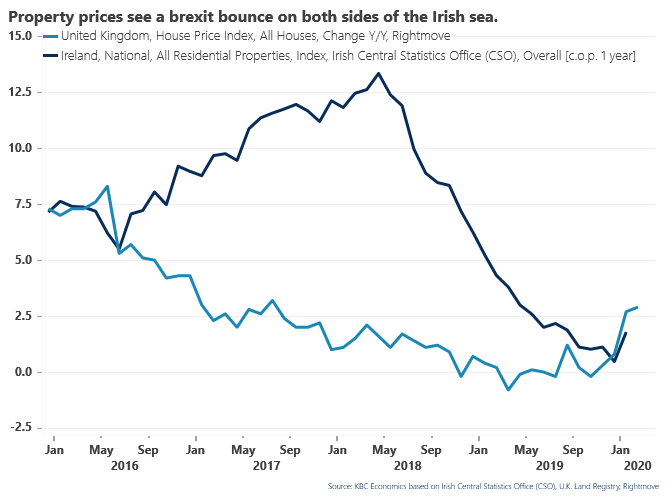 It is also likely that strong trends in incomes and employment in the Irish economy in the latter stages of last year also contributed particularly as 2019 was the first year since 2012 when Irish residential property prices increased less (+2.4%) than average weekly earnings (+3.6%). January 2020 data also show house prices rising (+1.8%) at less than half the pace of private rents (+3.9%).

While the improvement in property price inflation was broadly based regionally, it was most notable in Dublin where the biggest monthly increase in two and a half years was seen. Encouragingly, Dublin also saw a pick-up in transactions activity with purchases by households up 7.9% y/y whereas outside the capital transactions growth was broadly flat.

Overall, the January property price data remain consistent with an extended and bumpy bottoming out process in Irish property price inflation. However, recent developments suggest that this process may have further to run.

In the months ahead, near term downside risk to house price inflation may come from two sources. First and foremost, concerns around both the health and economic fallout from COVID-19 may lead prospective homebuyers to postpone purchasing decisions. Second, expectations are high that the next Irish government will introduce significant policy measures in respect of both private and public housing.

It should be emphasised that strong momentum in income and employment growth would normally imply robust increases in Irish house prices at present and the January data testify to the strength of underlying demand. However,  the role an easing in Brexit worries played in the improvement highlights the importance of sentiment and suggests hugely increased uncertainty of late is likely to weigh on housing market activity and inflation in coming months.