Irish property price inflation notably more modest than many other countries at present; UK+9%, US+13%, New Zealand near 30% is it different or later for Ireland?

Irish residential property price inflation picked up further in April with the twelve month increase rising to  4.5% (from 3.5% in March), the fastest pace since January 2019 (+5.2%).  As the diagram below illustrates, a clear uptrend in Irish property prices is now evident since last autumn when prices were marginally lower than a year earlier.

As the diagram also indicates, Ireland is far from unique in experiencing firmer property prices of late. Indeed, the acceleration in Irish house price inflation (+5.4 percentage points since last August’s -0.9% y/y drop) falls well short of that seen in either the US (+9pp) or the UK (+8pp).

More notably, the increase in Irish property prices appears very limited in the context of runaway increases reported of late in New Zealand-a country frequently compared to Ireland on many fronts. House price inflation in New Zealand has increased to just under 30% y/y from about 7% when the pandemic struck (New Zealand was recently ranked by Bloomberg as the world’s ‘bubbliest’ housing market-Ireland is the second least ‘bubbly of the 23 countries ranked). 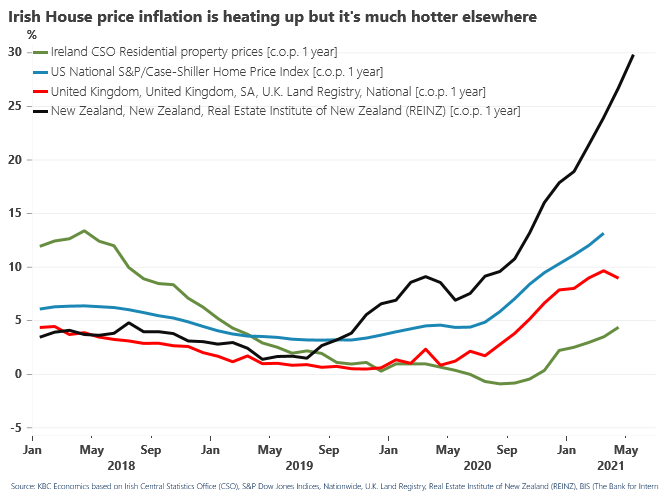 As has been the case in recent months, the increase in prices in Dublin (+3.5% y/y) is somewhat lower than in the rest of the country (+5.4% y/y) but the pick-up since last year’s low point is of a broadly similar magnitude.

Not surprisingly, the April data show a dramatic improvement in housing transaction levels. Home purchases by household buyers were  33.5% higher in April 2021 than in April 2020 led by a 47.6% increase in Dublin sales with sales outside the capital up 28.5%. However, sales of new builds were up just 5.7% emphasising the dearth of new supply.

More importantly, however, comparisons of transactions with April 2020 are hopelessly distorted by the impact of last year’s first lockdown. A more meaningful comparison is between April 2021 and April 2019. This suggests any rebound has still some considerable distance to go before we can deem it a recovery. Compared to two years ago, transactions in April 2021 were down 5.1% with existing sales 1.0% lower and sales of new dwellings 23.4% lower.

While a return to sustained solid growth in transactions is necessary, the depressed level of recent years means the current trajectory may prove far from sufficient to deliver a transition to a healthier Irish housing market. Some sense of the degree of disequilibrium in the Irish homebuying market is suggested by diagram 2 that contrasts the limited level of housing transactions in Ireland compared to that seen in the US and UK through the past decade.

Since 2011, housing transactions have averaged about 2.4% of the Irish housing stock compared to 4.2% in the US and 4.7% in the UK in spite of much faster population growth here that would argue for a more rapid turnover.

After an initial bounce from the immediate post-crash period, the subsequent uptrend has been very modest and suffered a sharp reversal in 2020 as the pandemic struck. Unlike the UK or the US in particular, as diagram 2 suggests there has not been a marked turnaround in the scale of property transactions in Ireland thus far.

Diagram 2 implies a cumulative shortfall in Irish property transactions of around 400k through the past decade relative to comparable ‘Anglo-Saxon’ markets  and hints at a correspondingly large number of individuals or households in properties that may be unsuited to their current needs. These numbers give some sense of the scale of underlying imbalances in the Irish housing market at present. 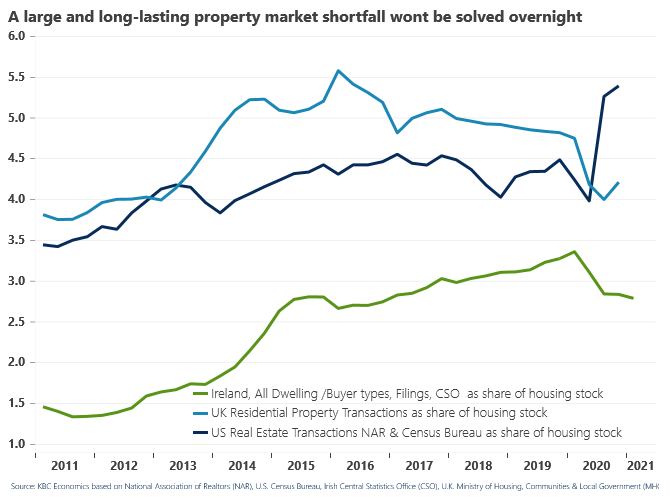