Irish house price inflation edged marginally lower in October with the annual increase of 0.9% fractionally below a 1.0% figure for September and translating into lowest year on year change since May 2013 (-1.7%).

The October data suggest property prices are currently flatlining on a monthly basis with no change in Dublin property prices in either September or October and two consecutive increases of just 0.1% outside the capital.

The pronounced slowdown in Irish property price inflation is somewhat at odds with the resilience of recent indicators on activity, employment and incomes. Hence, it appears to reflect issues specific to the housing market rather than more generalised problems in the Irish economy

Textbook economics would suggest the slowing Irish residential property price inflation is a reflection of improving supply and/or softening demand for housing. Completions data indicate that new supply is increasing and this may be playing some role.

Property purchases by households were modestly higher in October than a year ago ( filings +6%) but are only marginally up for the first ten months of 2019 (+2.2%) , implying no great lift in activity. However, at the margin, expectations of continuing improvements in supply may be dampening demand at present by holding out the prospect of greater future choice and preventing the emergence of ‘panic buying’.

On balance, it seems unlikely that improving supply can adequately explain the trend slowdown in house price inflation, particularly as recent Central Bank research confirms various other estimates that suggest new housing completions are still at levels substantially lower than those required to match ‘natural’ demand for housing.

Importantly, the demand for housing that we see reflected in the property price data differs from ‘natural’ demand for housing in two important respects. First of all, the property price data capture only the impact of those now willing and able to purchase a property at current market prices while estimates of ‘natural’ demand encompass a much broader range of housing requirements. Our sense is that a broad combination of constraints on affordability and availability as well as anxiety about an uncertain economic outlook are curbing ‘effective’ demand relative to ‘natural’ demand and significantly contributing to the slowdown in Irish property price inflation.

Affordability constraints are now biting hard on house price inflation. The second quarter of 2019 was the first time that the increase in Irish house prices (+2.5% y/y) was less than the increase in weekly earnings (+3.6%) since property prices bottomed out in early 2013. The average increase in Irish house prices through the past five years has been 10%, about five times the rise in average earnings over the same period. This divergence has progressively reduced the number of people with the wherewithal to finance a home purchase at present.

Some perspective on the extent of this constraint is provided by 2018 data from the Survey of Income and Living Conditions (SILC) that suggest only households in the top 20% of the employee income distribution (and consequently a much smaller proportion of younger households) would have had the income to qualify for a 90% mortgage on the median home price of €246k for 2018. While the SILC data include households of all forms and ages and, consequently, cannot be taken as a profile of homebuyers, they serve to illustrate the broadly based nature of affordability constraints.

The detailed supporting data on house prices provided by the CSO also hint at another important distinction between housing demand and homebuyer demand. Caught between the greater purchasing power of non-household buyers and the affordability constraints, effective demand from homebuyers appears to be softening in a manner consistent with the slowdown in Irish property price inflation. 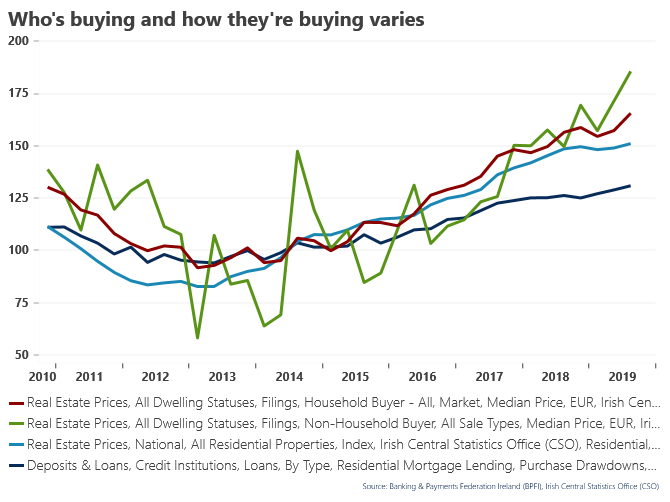